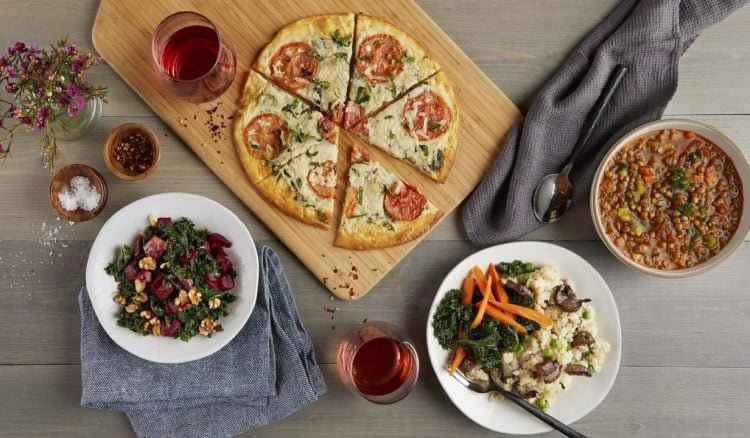 Fresh, organic, delicious and plant-based? Is there anything better? Yes – when it’s fast, convenient delivery directly from Veestro – no matter where you live.

No time to prepare meals? Are you subsisting on a diet of fast food and frozen entrees?

Working as an investment banker a few years ago, he typically got home at 10 or 11 p.m. “All I wanted to do was find something quick, so I could eat and go to bed,” he recalls.

That meant a lot of frozen pizza and frozen supermarket meals.

“It started taking a toll on me,” he says. “I started gaining a lot of weight, started having a lot of skin problems. I was waking up really tired. I looked everywhere, and I couldn’t find anything that was healthy enough for me.”

Fachler decided to create a company that offers healthy, convenient and affordable food for busy people. Savvy in finance and operations, Fachler knew he’d need help marketing the business. He called on his sister, Monica Klausner, “the best marketing and salesperson I know.” A stay-at-home mom with three kids and little time to cook, she loved the idea.

As part of their research, the siblings tried Blue Apron’s meal kits. “We tried it – and we realized it wasn’t really convenient,” Klausner says. “It was still about an hour and a half to two hours’ worth of chopping and prepping and cooking. Then, on top of it, you have to clean up.”

Along with convenience and health, they wanted delicious food. “If the food is not delicious,” she says, “it doesn’t really matter how healthy it is. Nobody’s going to want to eat it.”

Going vegan isn’t the point, the siblings stress. “It doesn’t matter if you only eat plant-based a few times a week,” Klausner adds. “It doesn’t have to be all or nothing; it can be a combination. Food is a pleasure, and you’re supposed to enjoy it.”

Despite the lack of animal products, Veestro meals are high in protein, using lots of lentils, beans, and some replacement meats, aimed at people unused to a plant-based diet. Veestro’s country-fried chicken – made of ancient grains and soy protein – is one of the company’s most popular meals.

Made fresh, the food is delivered frozen, by design. “It’s there for the days when you get home, you’re tired, and just want to grab something out of the freezer,” Klausner says.

Frozen foods also reduce waste, she says, noting that people throw away nearly 40 percent of the food in their refrigerators on a weekly basis. “By delivering the food frozen, our customers are able to keep the food in the freezer and eat it as they need it.” No preservatives are used, but the meals can stay in the freezer for up to eight weeks. “That’s our little contribution to reducing waste,” she says.

Klausner and Fachler eat Veestro meals at work, and each keeps plenty of Veestro foods on hand at home. “Our chef is constantly coming up with new dishes, so we’re always eating interesting things that would never occur to me to put together,” Klausner says. “The other day the chef made a rice and quinoa breakfast pudding, which we actually loved so much we put it on the menu right away. It would never have occurred to me to make quinoa sweet.” Veestro substitutes dates, raw cane sugar, pure maple syrup or sometimes agave syrup for processed sugar.

The leap to entrepreneurship was challenging, the pair recall. “The biggest challenge is that all the stress of making the business work is on your shoulders,” Klausner says. “You can’t just go home and forget about it. You’re working 24-7 for a long time.”

“But the payoff is better,” Fachler adds. After spending three years in a 1,500-square-foot kitchen in Thousand Oaks, they moved to a 20,000 square foot facility in downtown LA. “And every single time I walk into the production area,” Fachler says, “I look around, and I keep asking myself, ‘How did we get here?’ It’s so exciting.”

When the siblings started, it was just them and their chef, Jose Aramayo. They had grown to nine people in the kitchen by the time they moved to their present facility. Currently, they are at 40 employees.

Veestro recently added a corporate program in Los Angeles, with plans to expand to other cities “as we go.”

“We started thinking about where people are the most vulnerable in terms of making the worst decisions for food. And we realized it’s at work,” Klausner says. “We deliver a freezer into a company’s breakroom or kitchen, and we keep it stocked. Employees appreciate the perk of being fed – and the company gets the benefit of healthier employees who are much more productive.”

The siblings are in this for the long haul. “We’d like to be getting our food into as many households as we can,” Klausner says. “We would love to be a nationwide, well-recognized brand”.

“The bottom line is that we want the world to know that everybody needs to eat more plants. And if you don’t know what to do, come to Veestro and we’ll have it done for you.”