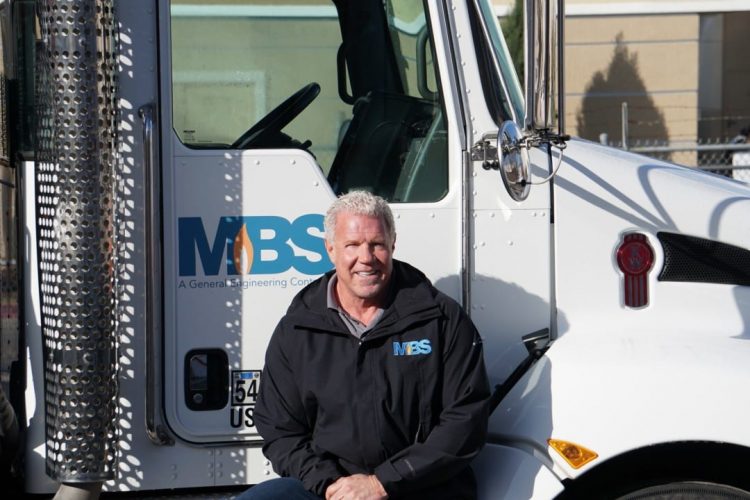 As CEO Brian James explains how MBS Engineering helps ease the California power crunch through natural gas turbines, it’s quite disarming because at the same time he talks about the importance of saving lives with gas safety.

James considers himself a preventative firefighter since gas leak inspections and seismic valves stop deadly gas fires before they start.

It is a creative and unusual way for MBS to see itself because for James’ company, the impetus is always on safety — for employees and the companies it serves.

A year ago, for instance, MBS helped a retirement home in Hayward, California with a gas leak. “The problem was under the concrete, so it was difficult to get to,” James says. “It was in the middle of winter so they did not have the option of not having gas to heat the premises.” Given the predicament and the scarcity of competing, qualified, contractors, MBS could have named its asking price, but “our focus is not making money, it was helping a vulnerable segment of the population,” James says.

So where does the focus on safety come from? At the age of 10, James began collecting scrap metal to convert into pot holders through welding. This experience, and the presumptive accidents, cultivated a first-hand appreciation for safety in James.

His concern today is California’s energy crisis. The static electric power generation levels plus the growing population and power demand will result in drastically increased prices for grid electric utility, through marginal cost (when you get to the end of any commodity, the price increases wildly as demand goes up).

The San Francisco Bay Area housing crisis is an example of this marginal cost increase effect. MBS commissioned an engineering paper on this impending crisis. James says it is a way to alleviate this problem: use gas — differently.

While California utilities are currently using natural gas to generate about half the state’s electric power, much of the ‘waste heat’ (thermal energy that remains after combustion of the gas powers an electric generator) cannot be utilized on-site, or transported for use.

The plan is to not generate and then transport the power as electricity, but to use gas turbines, on-site, where the ‘waste heat’ can be used in a variety of ways: as thermal energy or for temperature control, even for drying or CO2 provision for plants.

Rather than the ‘hub’ transforming gas fuel to electricity, and wasting thermal power, and bleeding electrical power along the transmission lines, the ‘spokes’ generate power at the terminus, and waste much less. The efficiency through this distributed model goes from about 30% to 90%.

Needless to say, this solution reduces electric costs and is better for the environment, for the power produced. Finally, it may be the only way some industries get approval for their operations.

With the burgeoning hemp and related industries drawing even more power, the utility may be unable to deliver power. “People don’t realize how wasteful the grid electric utility is,” says engineer Trent Vleisides.

Because of the large power output from these on-site gas turbines, they are indicated for mostly industrial operations, including beer breweries, emergency backup systems, critical infrastructure, dairy farms, IT data collocation centers and server farms, and occasionally schools and colleges.

The fires that plagued Northern California in 2018 prove that power utilities need help, and MBS has been providing it for some time, if not generating electrical power. MBS commonly gets commercial leak inspection (survey) and repair referrals from utilities like PG&E and has installed more seismic valves than any other company in the state of California. The focus on safety is a large reason MBS is trusted.

The fleet of MBS service trucks is showroom clean and it recently purchased an oversize HydroVac trenching truck. James takes pride in the quality and configuration of MBS’ tools, including state-of-the-art leak detection equipment like the Remote Methane Leak Detector (RMLD) and Detecto Pak-Infrared Detector (DP-IR), both of which are typically used by utilities.

The staff wear logo-embroidered, high-end apparel one just isn’t used to seeing as part of any company uniform. And that philosophy — to reach, to excel, to go beyond the minimum requirement – is a cornerstone of the company, apparent in philosophy, management and employees alike. The engineers at MBS take particular pride in the granularity and accuracy of their leak survey reports and the details of their project plans and work scopes.

The orientation toward uncommon quality has its effect: it’s great for morale. And this belief is not just exemplified in tools and materials, in trucks and attire, but extends to the design of the office in San Ramon, California (MBS is currently expanding to offices across the street). It’s common knowledge that working in a nice environment, like offering nice apparel to your employees, just feels nice – but not every company practices it.

“I was raised poor and sometimes even went hungry,” James says. “This is why I provide boots to new hires, and why our fridge is always stocked with food. I know the feeling of not having enough, and I don’t want anybody else to experience that.” Hearing this, it occurs to us that it could just be that MBS has made an actionable business philosophy of simply being nice.

MBS is something of a happy paradox: it employs contractors who are actually engineers. It is a profitable company that isn’t cheap. One employee says that MBS employees aren’t micromanaged; they’re empowered to do their best, which also means they are free to fail, on occasion.

Essentially, they are invited to own their work and be accountable for their output. In today’s micro-managed workplace, this management style is unusual, but it’s working: MBS keeps people — and they are happy.

Too often, we see corners cut, bean-counting, micro-management, and ‘me-first’ expediency from businesses. We have all seen the slouching in the last few decades, the 12-ounce soda can cut to 11.5 ounces, the outsourced, exploited workers, the sub-par materials from overseas.

MBS is the antithesis of that.

Is MBS just smarter than other companies? Is the company just nicer? Does it win because it is more focused service than money? Because it is oriented toward safety? Because of the team James has painstakingly put together? Because the employees are free to do exceptional work? Or is it some combination of the above?

MBS is driven to excel. The push to excel, to be excellent, is just not something you see in business very often; profitability and success don’t demand it. But you know where you do see it and where it is indispensable? On the field, in the elite sports that mark James’ formative years, from college football, to years of coaching. The trick is capturing the drive one sees on the field and bringing it to the office and James has achieved it.