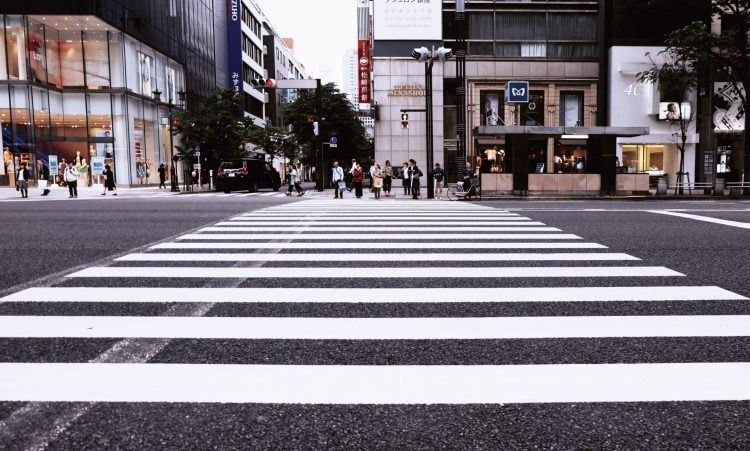 The right of way not only dictates who gets to go first but who is responsible in the case of accidents.

When it comes to the relationship between drivers and pedestrians, the right of way means everything.

Interested in learning about the specifics of right of way laws? Then read on. We’re going to get into the details below.

We’ll begin by discussing the right of way laws at signaled crosswalks. These are the crosswalks that are directly adjacent to stoplights. On each side of the crosswalk, there is a signal light indicating to pedestrians when they are and aren’t allowed to cross.

In fact, you might not realize it, but crossing when you’re told not to could get you a jaywalking ticket, even if there are no vehicles in sight. When that light says, “don’t walk,” the road is the driver’s domain.

Right of Way Laws When Crossing Outside of a Crosswalk

As such, if a pedestrian gets hit by a car while crossing in this manner, he or she could be held liable for damages, not only to him or herself but to the vehicle by which he or she was struck. How’s that for adding insult to injury?

Note, though, that state laws can differ on this matter. Some states put some of the onus on the driver in the event of an accident, especially if the accident could have been avoided.

Right of Way Law When Walking on a Sidewalk

Next, we’re going to discuss the right of way laws relating to sidewalk use. If you’re walking on the sidewalk, you have the right of way. There are no exceptions to this.

So, if you’re on the sidewalk, and you come up to an intersection, you get to walk across that intersection before allowing cars to turn. It doesn’t matter if that car was there before you. The driver is legally required to wait for you to cross.

Now, this doesn’t mean that you can’t wave the driver on. You’re certainly allowed to be courteous to your fellow human beings. But as far as the law goes, you, the pedestrian, have the right of way.

Right of Way Tips for Drivers

Now, the law is the law. Note, however, that in the case of right of way scenarios, the law is a bit . . . malleable. Most driver-pedestrian accidents are judged on an individual basis. As such, as the driver, you’re advised to utilize the following tips.

Slow Down at Crosswalks

First and foremost, if you come upon a crosswalk, you need to slow down, regardless of whether or not there’s a stoplight above it. This doesn’t mean that you need to drop your speed substantially, but you need to brace yourself for someone potentially crossing.

Pedestrians tend to ignore signaled crosswalks on a fairly regular basis. As such, when you’re passing through them, you need to be vigilant.

Jaywalking is illegal. Those who participate in it are in the wrong. However, that doesn’t mean that you shouldn’t yield to them.

If you see someone jaywalking in front of you, you’re advised to slow your vehicle down so that the jaywalker can cross the street with plenty of clearance. Hitting a jaywalker might not get your arrested, but there’s still a possibility that it could.

This isn’t a battle to be won. Let the jaywalker jaywalk and let logic and reason win the day. You’ll forget about the whole situation within a matter of minutes.

Be Vigilant When Passing Stopped Vehicles

A common scenario when a driver stops at a crosswalk is for the driver directly behind to try and pass. This is usually done out of frustration, as the driver behind thinks that the driver in front has stopped for no reason. But in reality, the driver in front might actually be stopped because someone is crossing the road.

As such, if you’re the driver behind, you need to be very careful about passing the driver in front. Assess the situation, take it slowly, and make sure that there’s no chance of you hitting a crossing pedestrian. If you were to hit a pedestrian in this situation, you would be in the wrong and would be facing some serious legal trouble.

Knowing the Right of Way Laws Is Hugely Important

The right of way laws might seem inconsequential. However, if you fail to follow them, you can end up getting into a lot of legal trouble. As such, you should take these to heart and store them securely in your memory bank; doing so could make a big difference someday.

Hoping to read similar articles? Our website can accommodate you. Browse our selection of articles now.

Tags: Driver vs. Pedestrian: Who Has the Right of Way?Hit By a CarJaywalkinglawmemoryright of way lawsvehicles
ADVERTISEMENT