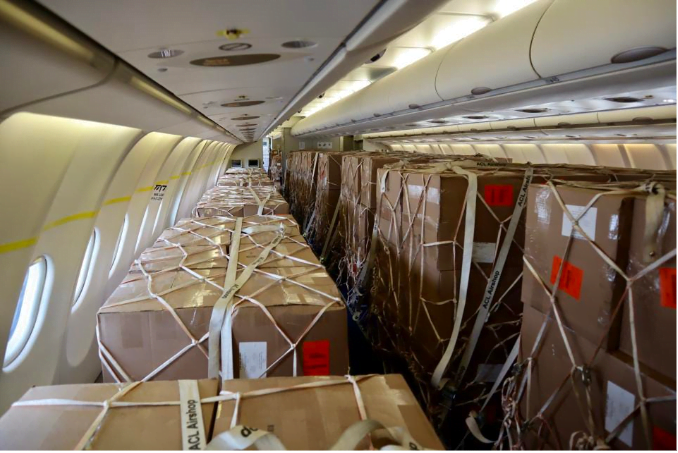 One of the most notable aspects of the Russia-Ukraine conflict has been the international community’s reaction. Particularly from the perspective of civilians and non-military organizations . Individual responses to the state of warfare have been exceptional. Even more impressive are the mobilization efforts of committed individuals and organizations who have worked together to make civilian aid to Ukraine a massive success in recent months.

The Revival Foundation is one such organization. It was founded by Aksenia Krupenko, a Ukrainian living in Washington DC. The foundation is running one of the best coordinated humanitarian aid programs for Ukraine. The foundation has evolved into a hub for mobilizing and coordinating the delivery of critical supplies from the US to help save Ukraine with aid. Since the beginning of the war, the program has successfully flown 150 tons of vital aid. This has been an impressive effort but not one without its challenges.

Currently, all international aid to Ukraine is either military or purely humanitarian. Many were surprised by the reported red tape, even for non-lethal civilian aid, imposed by Russia’s presence in Ukraine. The numerous obstacles halted the Revival Foundation’s plans to send the first shipment.

However, everything changed when David Kezerashvili, an entrepreneur and former Georgian defense minister, funded the first plane shipment. In addition to funding, David’s connections helped cut some of that red tape to smooth the way for aid.

The success of the first shipment from the United States gave other donors incentive and an actionable plan. This has propelled the program to greater success. As of writing, 13 planes have been sent to Ukraine as part of the program.

The Outstanding Teamwork in Mobilizing and Delivering Humanitarian Aid to Ukraine

It is critical to recognize the step-by-step process that resulted in an effective action plan for delivering aid to Ukraine. Aksenia Krupenko, established the Revival Foundation as a non-profit organization during the early stages of the war. She reached out to her network in the Ukrainian Diaspora and donations began pouring into her DC apartment. Quickly the small space became overcrowded, necessitating the need for more storage.

Storage space was donated by an anonymous group in Maryland. Different volunteers were given sufficient space to sort donated goods here, but that space also quickly became too small. Another donor quickly offered warehouse space in the Tri-state area.

Despite tremendous efforts on the ground, getting donated goods to Ukraine has proven, and continues to prove, very difficult. All freight airlines in the United States responded to the foundation’s request by informing them that closure of Ukraine’s airspace complicated the transportation of such aid.

Chartering a plane from the US would also prove to be a time-consuming and expensive process. It was estimated that each flight would cost at least a million dollars. Other shipping options, such as by sea, were deemed implausible due to the time needed for transit and the desperate need for aid to reach Ukraine immediately.

The seemingly insurmountable problems did not deter the tenacious Krupenko. She immediately began contacting her Ukrainian contacts in an attempt to establish a connection with Eastern European airline carriers. Through these connections she was introduced to the CEO of Ukraine’s postal service, Igor Smelyansky. He advised her to route cargo through Poland. Igor used his relationship with Windrose, a Ukrainian charter airline specializing in imports and exports from Poland to the United States, to provide Aksenia Krupenko with a means to transport.

Windrose was able to accommodate the aid on return trips to Poland. The foundation’s cost estimates dropped significantly with this partnership. Windrose had offered the service at a non-profit cost of $250,000 per flight. All that remained was to raise funds to cover the expense. Here is where David Kezerashvili enters the picture.

David Kezerashvili and Georgians’ Incredible Support to Ukrainians So Far

David Kezerashvili, the donor who financed the first plane, was already well-known in the Ukrainian diaspora community. His commitment to support the Ukrainian people on multiple fronts during the crisis has been quite public. His media company, Formula TV, based in Tbilisi, Georgia, has actively rallied support for Ukrainians while also keeping the conflict at the forefront of the country’s national discussion.

FormulaTV established a Ukraine Support Fund early in the year, with David contributing 500,000GEL (a little over US$177,000). The Support Fund quickly became a channel for mobilizing funds and non-lethal supplies from Georgia. This established a pipeline of aid to Lviv, Ukraine, via Poland on a fairly consistent basis.

Temuri Yakobashvili, Georgia’s former deputy prime minister and co-founder of the Revival Foundation, introduced Aksenia Krupenko and Kezerashvili. The timing was ideal because Kezerashvili was one of the philanthropists who recognized the gravity of the situation. As former Georgian Defense Minister, Kezerashvili knows first hand how urgent aid is required in Ukraine’s escalating state of war. He immediately stepped up, covering the entire shipping cost for the first flight in early March.

That donation brought the intricate program to life and served as the fuel for the whole operation. Success attracted additional donors to facilitate more flights and aid. So far, the Revival Foundation fund, which is nearly depleted, has accounted for 13 flights packed to the brim with vital aid.

When people come together for such a noble cause, it demonstrates humanity’s true power. The Revival Foundation’s program is an excellent model for showing others how to make their aid programs work. Hopefully, more channels for supporting Ukrainians will follow in their footsteps.

5 Ways You Can Help to End Human Trafficking

5 Ways You Can Help to End Human Trafficking