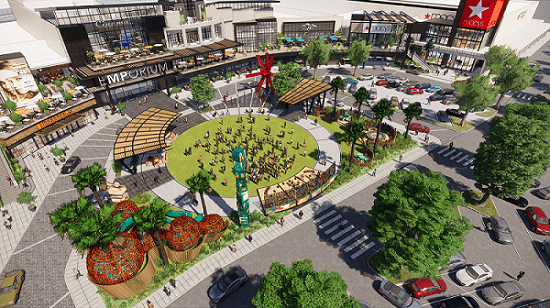 Centennial, a real estate investment firm with a national portfolio of shopping, dining, entertainment and mixed-use destinations, has become a dominant force in real estate innovation with “placemaking strategies” that create unique and long-lasting community connections in the locations in which its properties reside.

The key to these connections is creating experiences that people don’t expect but will always remember. Placemaking isn’t new — but the way Centennial does it is.

“When we plan a redevelopment, the first thing we do at Centennial is to ‘learn to unlearn,’” says Steven Levin, Centennial’s CEO. “Today’s malls were built for yesterday’s consumers, but things have changed. Shopping in itself is no longer enough of an experience to drive traffic. What consumers want now is an immersive, dynamic, very personal experience that combines shopping, dining and entertainment with unique-to-market placemaking, engaging activations and innovative thinking to create a destination people will visit again and again because they want to spend time together, making memories and enjoying each other’s company. That’s the kind of change we envision and the kind of destinations we deliver.”

“We have a unique vision for each one of our properties,” says Whitney Livingston, COO, Projects, Centennial. “We understand there’s no cookie-cutter approach to placemaking. What works well in one location won’t necessarily resonate in another. What differentiates Centennial from our competitors is our ability to hear what people in each community want, our ability to understand how they want to connect with our shopping centers, and our ability to plan and successfully execute strategies that fulfill those wish lists.”

A New Spin on Placemaking

“While we recognize the value in proven strategies, one of the things that makes Centennial stand apart from the crowd is our willingness to think outside the box,” says Colleen Heydon, Senior Vice President, Centennial. “We value ideas that are new and inventive, and we aren’t afraid to experiment to more meaningfully connect with our communities and exceed the expectations of the consumers in our markets. Our common areas and vacant spaces are our experience laboratories.”

Immersive Gathering Places: While shopping centers have long provided visitors with gathering places, many of these “center court” and other traditional spaces have simply become places people congregate because they are already at the mall – they’re not destinations in and of themselves. Centennial is turning that concept upside down with a brand-new vision for immersive gathering places that makes these spaces not only a destination, but “the” destination – and another reason people come to the mall.

To take retail real estate to the next level, Centennial envisions a gathering place that is so attractive, has such ambiance and an abundance of dining and entertainment choices, that consumers will actually plan to spend time there rather than simply finding themselves there while already at the mall.

Therefore, according to Centennial’s visionaries, one of the coming trends in placemaking with regard to gathering places is to provide visitors with immersive purpose-built experiences. For example, Centennial is planning very open park-like indoor/outdoor spaces at several of its properties that artfully combine green and hardscaped designs with incredible aesthetic appeal to encourage year-round usability. Ringed by restaurants and entertainment options, visitors will think of these spaces as true destinations for their off time, completely distinct and separate from mere resting places at a shopping center.

Art Installations: Using art as yet another way to connect with its communities, Centennial recently announced a series of unique art installations at two of its retail real estate properties – Hawthorn Mall  and Fox Valley Mall – in Illinois. In each case, Centennial has tapped local artists with a clear tie to the community or artists whose work incorporates imagery specific to the community in which the murals appear. Centennial’s strategy is to develop a connection with shoppers by inspiring conversations about these installations, encouraging visitors to interact with the art in very personal ways and to share those interactions online, and of course inviting them to enjoy the ambiance and aesthetics the installations add to the center.

At Fox Valley Mall, located in the Aurora/Naperville area, both suburbs of Chicago, Centennial has commissioned a pen-and-ink mural by the iconic Kelsey Montague. The 980-foot drawing of a swing will be loaded with smaller pictorial stories to entice people to talk about the piece’s meaning and to personally interact with the art, posing and posting pictures of their interactions on social media as Taylor Swift did with Montague’s now infamous Angel Wings mural.

At Hawthorn Mall in Vernon Hills, Illinois, Centennial recently announced plans for a significant redevelopment. To create excitement about the coming changes, the firm commissioned a large mural that will serve as the backdrop for upcoming community-focused events. Since the center is located in a suburb of Chicago, Centennial chose Myron Laban, a native of Des Plaines, Illinois, a Chicago-area pharmacist and an emerging Chicago painter, to create the 1,050-foot mural which will artistically depict the values and spirit of the families who regularly visit the shopping center – a very personal and meaningful portrait. A second 4,224-foot mural at the same center will be created by Anthony Lewellen, a Chicago-based multidisciplinary artist. Lewellen’s art is quintessentially Chicago, and the images he creates tell an unspoken story about this urban landscape that will be both recognizable and emotion-evoking for the people who live, work and shop so close to the windy city.

Enhanced Cultural and Loyalty Programs: Centennial malls also host a variety of events that appeal to families, foodies and fashionistas. In addition to traditional and holiday favorites, Centennial has recently begun to add a number of culturally significant events designed for the changing and more diverse demographics in markets where that is most appropriate, and it has begun to roll out enhanced loyalty programs and perks that allow shoppers to customize the way they interact with each mall.

At Centennial’s MainPlace Mall in Santa Ana, California, for example, the center hosts a Latin music festival and fiesta as well as a Día de Los Muertos celebration, each designed to create a meaningful connection with the area’s Latino/Hispanic population.

Another inventive placemaking strategy includes a re-make of more traditional loyalty programs. Centennial’s new MyPerks loyalty program, currently being rolled out at several Centennial centers including Hawthorn Mall, will allow visitors to personalize their shopping experience. After creating a profile online, shoppers can follow their favorite stores to get retailer offers and discounts as they always have, but the new MyPerks program will also give them members-only access to local promotions and gift-with-purchase offers they won’t find anywhere else. During special events at the mall, MyPerks members will get the red-carpet treatment with VIP access as well as the opportunity to rest and recharge in the brand-new MyPerks Lounge being rolled out in select markets now. The MyPerks Lounge will also be used as a venue for exclusive members-only events.

“We are transforming traditional enclosed regional malls into urban villages in suburban environments, and that calls for an event line up that is culturally significant and appropriate for each market’s demographics, but also for programs that allow each customer to tailor their own experience with the mall to their specific wants and needs,” Levin says. “Fifteen years ago, developers worked to attract a shopper 2.4 times per month; with our holistic focus on innovative and experiential placemaking, we are creating destinations that we expect will drive traffic three to five times per week.”

Centennial is a national owner of major shopping, dining, entertainment and mixed-use destinations. Rooted in retail since 1997, the company is focused on shaping the evolution of American retail by creating a superior multi-faceted shopping experience. Centennial properties serve not only as a place of commerce, but a place of community. For more information, visit CentennialREC.com.

7 Ways to Make Your Open House an Unforgettable Event

Improving the In-Store Experience: 4 Interesting Ways it Can Be Done