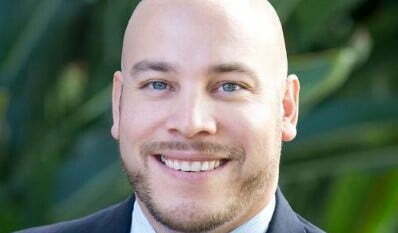 WHEN JOE LEWIS HEARD THE BAHNSEN GROUP WAS LEAVING MORGAN STANLEY TO JOIN HIGHTOWER ADVISORS, he was intrigued. He had always been enamored with David Bahnsen and his team and was curious as to why he made the switch.

Well, Bahnsen wanted to be part of the HighTower philosophy, created by CEO Elliott Weissbluth, which is taking the sophistication of Wall Street and its products, trading, engineering and melding it with “fiduciary duty,” which obligates financial advisors to “legally” put the client interest first.

Years ago, Weissbluth saw the dichotomy between part of the financial industry that was upholding the fiduciary duty but didn’t have the sophistication of Wall Street behind it. He also saw the sophistication on Wall Street that didn’t have any fiduciary duty to put the client interest first. So he thought, “Wouldn’t it be a good idea if you could get the best of both of those worlds?”

What emerged from there is one of the most powerful Wall Street firms – with $30 billion in assets — that only wants to employ the most sophisticated advisors in the country.

Enter Lewis, who caught the attention of Bahnsen through his wide network of Wall Street stars.

“Joe had a reputation at Morgan Stanley that came highly recommended to me,” says Bahnsen, who spent 10 years at the firm as a managing director. “I know a lot of people there who told me, ‘We know what you’re doing at the Bahnsen Group and we think you should talk to Joe.”

Well, that got Lewis over the first barrier and he ultimately wound up exactly where he wanted – an office right next to Bahnsen’s. Lewis blushes when he talks about being the newest member of the renowned Bahnsen Group.

Surprisingly, Lewis was chosen despite having just two years’ experience at Morgan Stanley. Yet, what jumped out at Bahnsen wasn’t just the 22 awards Lewis has captured in his financial career, it was Lewis himself.

“Joe reminded me of me 15 years ago, the way I was doing it,” Bahnsen says. “I have a soft spot for that kind of relationship-oriented advisor who is out in the field meeting people and willing to be more creative in how you add value to a client relationship. I hold in high regard those who want to make it in this business relationally – people who will extend themselves to be out there to meet people and expand their networks and their centers of influence. It’s becoming a lost art. Fewer and fewer people are willing to separate themselves from their desks, get out there and become influential in the community and become well known while networking in the community.”

That’s what Lewis is all about – getting out there, shaking hands, communicating – that’s where he shines.

“Those who meet a lot of people are in a position in an organic sense of creating and connecting the dots,” Bahnsen says. “Joe is doing this. He lives a lifestyle of connecting. That’s ideal for what we need and want here.” 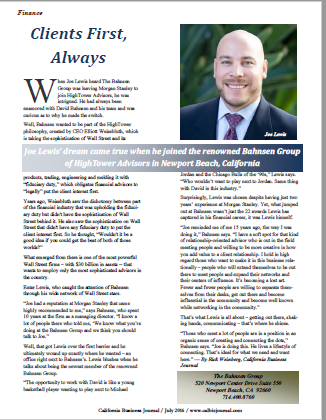