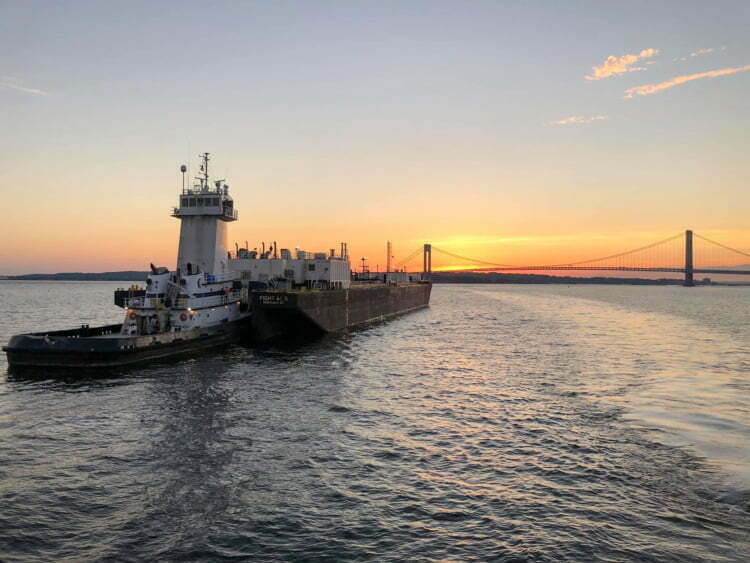 The provider of marine petroleum transportation services is steering the shipping industry toward cleaner and more sustainable fuels.

Last March, the world’s attention was riveted on the Suez Canal when the massive container ship, the Ever Given, became stuck and there was seemingly no solution. This debacle brought much of the cargo-shipping industry to a halt and cost as much as $9.6 billion a day in trade, as experts and engineers tried to get the ship clear of the channel.

The incident gave laypeople insight into an industry many rarely see: the sheer numbers of ships that move goods around the world every day and the staggering size of the vessels that carry them. The Ever Given itself is 1,312 feet, or almost a quarter mile long.

For those who’ve never been to a large shipping port, it’s hard to fathom the size of these ships and the infrastructure that’s required to power them every day. And even if you have seen them, it’s still a lot to fathom. How are these vessels fueled? With what? How many gallons does it take to make a 1,300-foot supertanker run the width of the Pacific Ocean? What is the carbon footprint of this industry and how can it be improved?

Seattle-based Centerline Logistics, a leading national provider of marine petroleum transportation services, knows all the answers to the former questions and is determined to find a solution to the latter.

The company revealed its Visionary Fuels initiative and the formation of its Alternative Fuels Working Group in March 2021. The group “consists of industry partners and internal representatives from within Centerline who will spearhead the cooperative project.”

Centerline, with approximately 700 total employees, has a strong presence in California. The bulk of its activity is West Coast related and the company also has activity on the East Coast and the Gulf Coast. Centerline offers two primary services: bunkering, or ship refueling, and terminal transportation.

When large container ships or other vessels come into ports and harbors, they need to be refueled. Centerline has liquid petroleum barges that go to a terminal or refinery, take on the fuel, and then go to the ship to refuel it.

“That’s about half of our business and we move roughly 85% of the ‘bunker fuel’ on the West Coast today,” says Matt Godden, President and CEO of Centerline Logistics. “If you see one of those large ships coming in, there’s a very good chance Centerline has refueled it so it can continue on with its next journey.”

With ships that cost hundreds of millions of dollars to build and are in service 10 to 20 years, at what point do you start the pivot for an entire industry to integrate renewable or cleaner-burning fuels?

“First, let’s look at the history of carbon-based petroleum products,” Godden says. “The standard engines that operate on these vessels have historically burned dirtier fuels. Over the course of the last 20 to 25 years, however, there’s been a strong push, particularly in California, for cleaner-burning fuels. It is a transitory process where we are already migrating to cleaner fuels.”

This must be done at multiple levels, including improving technologies that control the biproducts of old fuels, converting ships to alternative fuels and building new ships with entirely new technologies.

“Currently, diesel and diesel-light products with lower sulfur counts are cleaner-burning fuels,” Godden adds. “The Visionary Fuels project, for us, is really the next evolution of that. Where it starts today is the huge push, for renewable fuels that can be burned in traditional diesel engines, but are built from organic matter, so biodiesel, for instance, or fuel based on a vegetable oil supplement. Stage One is this transition to ultra-clean renewable fuels.”

A transitory phase is a focus on options such as liquefied natural gas (LNG), which has a cleaner fuel and carbon footprint overall, compared to traditional petroleum products. LNG has been around for decades; the ships have very sophisticated design technology to run safely and keep the LNG at stable temperatures, but they haven’t been the dominant alternative. Production is increasing for these types of ships now.

“There are a lot of new vessels being delivered from shipyards all around the world that will burn LNG and so for us, that’s a key first element for ship refueling. But as you go further out, we will start seeing technologies that are 100% carbon neutral – hydrogen and ammonia, for instance – these possibilities will take shape in the next decade or two.” — Matt Godden

He explains that for most of the last five years, many of the new container ship vessels that have been built as “dual-fuel capable,” so they’ll come in with LNG capabilities where they can burn something cleaner like LNG but then also burn legacy petroleum products when necessary.

“Thinking even further into the future, we need to develop the mechanics around a hydrogen supply and creating effective hydrogen- or ammonia-based engines, but we’re not quite there yet,” he says. “The technology isn’t in place for container ships to be equipped with those now but it’s all coming quickly.”

Of course, when you change the vessels and fueling methods, it stands to reason, there must be infrastructure to support them. It is necessary for all the stakeholders to work together and have some agreement before implementing too many changes immediately.

“This year, we will announce the construction of several of these new vessels and you’ll see from our commitment to hundreds of millions of dollars of capital to support the initiative within the 2021 calendar year,” Godden says. “Because of the time that it takes to construct the vessels with permitting and every other aspect involved with building ships of that size, the vessels are not likely to come to market until 2024 at the earliest or potentially 2025, so there will be a bit of a pause, but you will see the commitment to building the equipment this year.”

Leaders in the industries that are most reliant on fossil fuels are recognizing the necessity and value of embracing cleaner and/or renewable energy sources and technology development.

“It’s good business for us too,” Godden concludes. “Sometimes it’s characterized certain industries are trying to hold onto the past but everyone in our company and the customers we service view this as a commercial next step and something that’s good for the industry. It’s frankly exciting and uplifting to be able to press forward with this.”