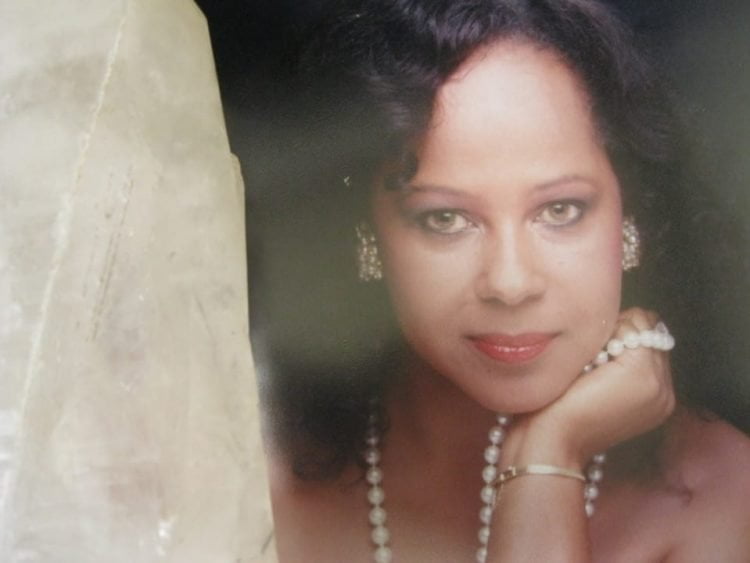 Living in China — and mastering the country’s unique business philosophies — had a huge impact on attorney and business consultant Stephanie Salt.

The impact was so huge that she changed her license plates from I SUE to I SERVE UNIVERSAL ENERGY.

Salt, the Founder and CEO of Intuitive Diagnostics, consults some of America’s top publically-traded and Fortune 500 companies on how China’s top CEOs and companies approach key business elements such as hiring top personnel, building a Board of Directors, mergers and acquisitions, and evaluating the personalities and characteristics of existing personnel and how its impacts colleagues and the overall company in a positive manner.

It is considered a very secretive – and spiritual – behind-the-scenes process. Some top CEOs and high-ranking business executives believe wholehearted in China’s way of assessing business decisions and opportunities.

“You wouldn’t believe which CEOs and other top C-Level executives follow this ancient business philosophy,” says Salt, who was the first American to be admitted to the bar as an advocate by the High Court of South Africa in addition to being on the international USAID team that setup the International Financial Service Center in Gaborone, Botswana; a consultant with Ernst & Young on the Southern African Development Community (SADC) Project; the Head of Intellectual Property at Altech in South Africa; and a professor at the International School of Cooperation in Wuxi, China.

“Look at Larry Merlo, the CEO of CVS,” Salt says. “He learned that the power of numbers are linked to ‘energy’ cycles and will not divulge his birthdate because of the power of this information in the hands of competitors. Same thing with Oscar Munoz, the CEO of United Airlines. You can look everywhere for his birthday but all you’ll find is that he was born in January 1959.” Merlo won’t even list his birth month – only the year he was born (1956).

So what does this all mean? “It’s one of the many business philosophies that China uses that can give a CEO and company in the U.S. another advantage in a very competitive landscape,” Salt says.

Taking it a step further, “In China, by the time a person has walked through the door, whether it’s for a job or for a merger opportunity, the Chinese have done all their numbers, all their due diligence, and they have a complete picture of how that person is going to function in their company, the benefits of the relationship, the mega-physical SWOT analysis.

“They have all this information before the person even opens up their mouth,” she adds. “They create a huge advantage. They use traditional business practices and these synergistic tools as well. When you put them together you have a very powerful combination. This is what we do: help American companies understand and embrace this concept.”

One of Salt’s telecommunications clients originally approached her regarding a merger and acquisition opportunity. She assessed the dynamics of the merger and informed the CEO of the company, “Don’t do it. This will not work.”

One of her determining factors in the decision was the “poor energy” she detected and the fact that one CEO came from “old money” and the other “bootstrapped” his business.

The CEO rejected Salt’s assessment and went ahead with the merger.

Six months later, “both CEOs were at each other’s throats,” Salts says with a laugh.

The merger was undone and both companies lost millions. The CEO who originally contacted Salt “came crawling back” to Intuitive Diagnostics and promised that “he’d never not listen to us again,” Salt says. “He’s been an anchor client since and his business is thriving.”

Salt pauses for a moment and says, “We help clients gather all the information via a synergistic combination of intuitive and cognitive data. The result is comprehensive corporate insight so you can make the smartest decisions and shrewdest choices.” 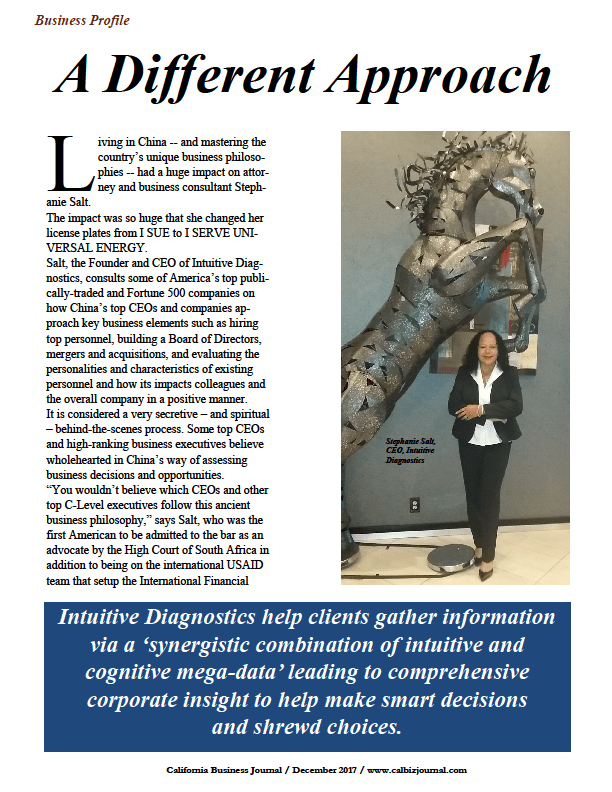