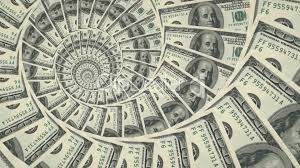 Evolution is the best word to describe the trajectory of Yuri Vanetik from lawyer to entrepreneur to investor to fund manager.

Vanetik is currently involved in Mergers and Acquisitions and advisory services through his own management consulting firm, Vanetik International. He also co-manages a private equity fund that invests in undervalued real estate through Dominion Partners and Dominion Asset Management.

He would not be the savvy financial manager he is today without the experience he gleaned along the way, starting with his family’s entrepreneurial background. A mechanical engineer with multiple patents under his belt, Vanetik’s father worked for a subsidiary of aerospace giant Lockheed Martin. He left the company to start his own manufacturing business, which he sold to a Japanese engineering firm. Vanetik’s father then jumped into the import-export business out of Hong Kong and also launched an oil and gas investment firm. He later expanded into mining and industrial lubricants, which he manufactured in Singapore in a joint venture with Union Oil, and sold mostly in Eurasia.

“And he’s been in that business to this day,” Vanetik says of his 79-year-old “still very active” father. Witnessing that independent spirit in his father catalyzed the younger Vanetik to pursue “financial freedom and autonomy to build something that can be sustained – something that’s truly yours,” he explains.

He went to law school at University of California’s Hastings College of Law in San Francisco and practiced law as a “rite of passage,” he says. He later worked for the international law firm of K&L Gates, LLP. Ultimately, Vanetik’s drive to “do deals and control my own financial destiny” inspired him to become an entrepreneur.

Like most entrepreneurs, Vanetik takes risks. He left a law firm for an internet startup, One Point, Inc., a destination site that provided a portal for e-commerce through a social network. “It got funded but it failed — like a lot of them during the internet boom,” he says.

Yet, through the dot-com experience Vanetik became hooked on entrepreneurship. He worked on and invested in other deals and startups, including a firm that developed a series of tech products for the insurance industry. One deal led to another. He ultimately wanted to have his own platform to systemically assess investment opportunities, so it would be easier to raise capital and attract institutional investors. A fund structure would also provide more autonomy, efficiency and higher profit margins.

“It’s an evolution of being a successful deal person. You move from doing transactions as a principal to actually having a fund,” he observes. “By virtue of that, we set up a real estate fund and do private equity investments.”

The biggest deal to date has been with Delta Petroleum Corp. With Vanetik facilitating the acquisition of a Kazakhstan-based oil and gas company, Delta’s stock went from around $3 per share to $18. However, in 2011, the then Kirk Kerkorian-backed company filed for Chapter 11 bankruptcy as unproductive assets obstructed the company’s efforts to find a buyer, according to news reports. The company has since been merged and its assets have been acquired by investors and creditors.

“My business partners and I saw an arbitrage opportunity in residential real estate in the flip market,” he points out. “A lot of people were flipping houses, but not doing it institutionally. It was inefficient. They weren’t looking at it nationally. We were.”

The flip model also provides the appealing factor of liquidity. Vanetik and his team typically sell properties every six to eight months, an extremely short hold time. He has also ventured into commercial and industrial real estate, yet the majority of his real estate business remains residential properties, mostly in the state of Washington and Oregon. And his real estate fund is growing. “It is small but robust, especially for what we’re doing,” he says.

Meanwhile, the M&A market, is rebounding, especially internationally – and especially for the potential of Vanetik’s fund and advisory services he offers. “We project that enterprise technology will continue to rise with M&A on the fast path to growth in the evolving digital space market,” he says.

He goes on to opine that “activist shareholders and private equity groups are going to be doing more and bigger deals. Last year, the market saw a large number of deals in the $5 billion to $10 billion range. That will continue because companies will seek to monetize acquisitions.”

He also foresees private equity firms putting “big money” into legacy companies and adding technology such as customer relations management systems, financial reporting and other data-driven systems. “We expect to see an increase in high valuations, which will dissuade private equity firms from counting on quick exits,” he adds. “I believe that it will take longer to build value and there will be fewer vulture capital deals.”

Vanetik has his eye on “wearable tech” because “it will turn the average Joe into a James Bond in the next decade,” he predicts.

He is also targeting legal tech for as an investment target space because “it will bring law out of the dark ages.”

As a lawyer by training and someone who regularly relies on the advice of lawyers, Vanetik has a strong interest in how tech innovation will impact not only the practice of law but also the administration of justice.

“Futurists and technologists are working on this as we speak,” he says. “We live in a world embracing self-driving cars and robots – and the law has no option but to evolve by employing technology. Investment in legal tech startups will be very hot because the legal sector will be transformed through technology, not through legislation or judicial reforms.” 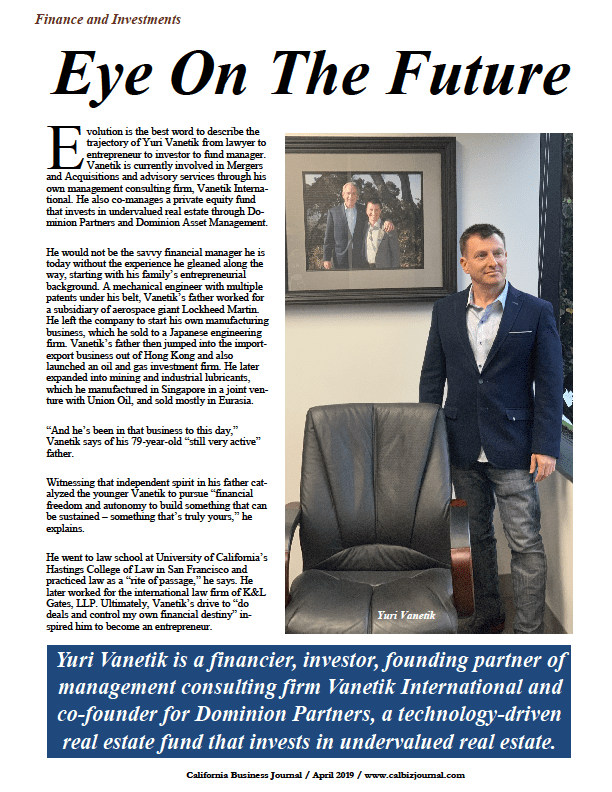 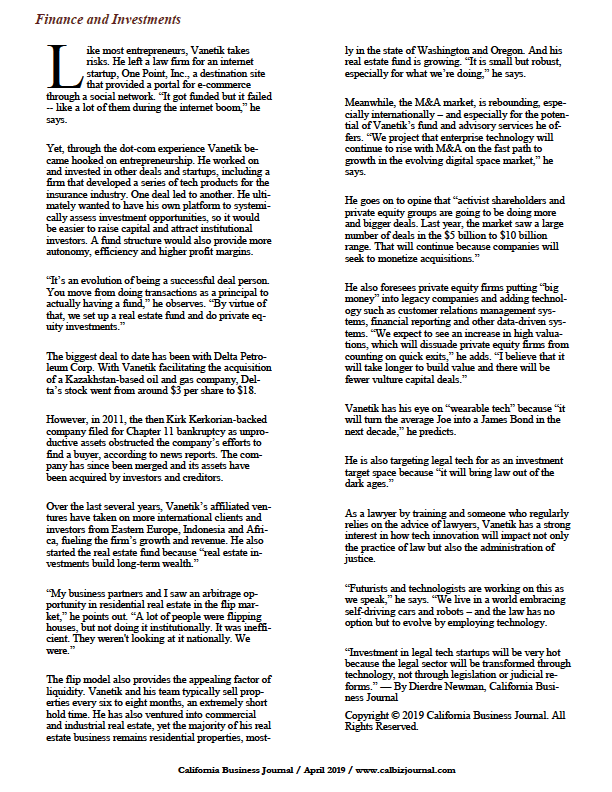