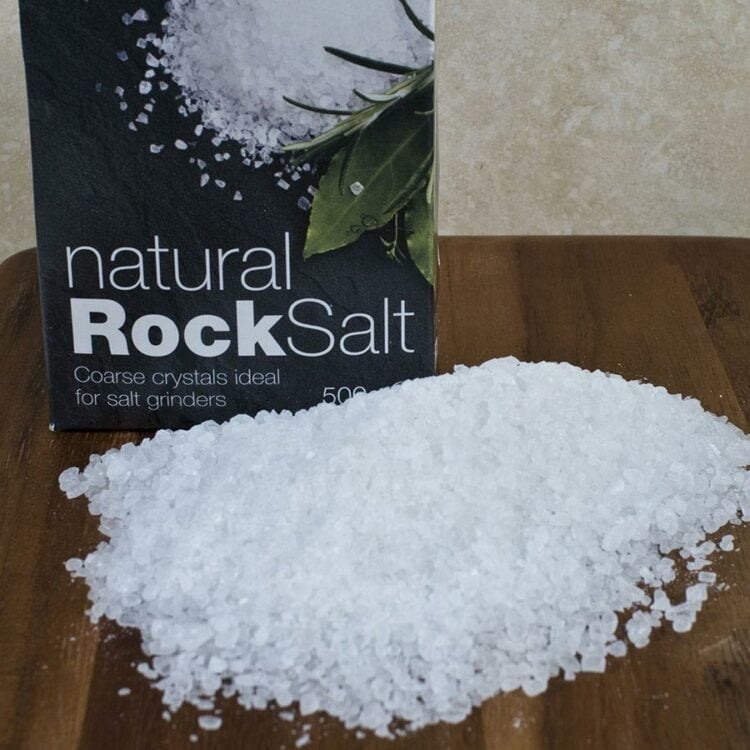 Where is rock salt used?

Each of us most likely heard about rock salt. But perhaps not everyone understands what it really is.

Rock salt is a natural material that consists mainly of sodium chloride. The composition of all impurities depends on the characteristics of the rock salt deposit itself. In its natural state, this material is indeed salty rocks.

However, after human processing, it becomes the usual white powder that we are used to seeing at home in a jar for spices or in a salt shaker. In this form, this substance is called table salt.

Rock salt is also called halite. It can be of various colors and shapes. It also has a number of features:

· Transparent or translucent surface
· Solubility in water
· Shine like glass
· Pronounced salty taste
· Resistance to negative temperatures
· Has a fragile structure. This facilitates its extraction and processing. Although, by nature it is hard and dense
· Changes its color depending on the place of extraction. May be white or grey. Sometimes minerals of black, blue, red or pink color can be found.

After halite is mined, it is processed. After processing, it acquires its usual form, in which it enters stores. Salt prices may vary. They depend on the place of extraction and the method of processing.

Deposits of rock salt were formed in a dry and hot climate during sedimentary processes. The origin of this substance is associated with the slow drying of endorheic salt lakes, shallow waters and sea bays. Salt is also formed in small quantities during volcanic activity during soil salinization. Salinization itself occurs in arid regions.

This process develops for two reasons:

· Natural salinity. It occurs in a place where groundwater with high salinity approaches the surface. The water itself evaporates, and a salt crust forms on the soil. Also, the soil can become saline during sea floods or tsunamis. Then a large amount of salt water penetrates into the lower layers of the soil. After that, the water evaporates, and salt forms on the surface.

· Anthropogenic salinization. A person can saline the soil in a dry climate with frequent watering. As a result of irrigation, minerals appear on the surface that were in different soil layers, and a salt crust is already forming from them.

By origin, rock salt is divided into:

· Stone. It lies in huge layers between various rocks.
· Self-planting. It is formed in evaporite basins, being deposited in the form of granular crusts.
· Volcanic. It is deposited in craters and lava
· Salt marshes. They are salt crusts on the surface of the soil.

· Vacuum method. Its meaning lies in the fact that minerals are digested from water with a high level of salt using special devices. For this, a well is drilled to get to the rock salt deposit. After that, fresh water is pumped into it. Minerals dissolve in it and form a saturated solution. And then the solution is pumped to the surface. Most often, salt is mined in this way for medicine and the food industry.
· Lake method. It consists in the extraction of salt in salt reservoirs. This method does not require serious equipment, but after extraction in this way, the salt requires careful processing.
· The main method of salt extraction is mine. In this case, rock salt is extracted from sedimentary rocks. Halite has to be softened under pressure and at high temperatures.
· Evaporation method is one of the most ancient methods of extracting rock salt. In this case, special equipment is used that heats seawater to produce salt.

Rock salt is used in almost all areas of industry and production. For example, in:

· Food industry and everyday life. There is a small amount of this substance in almost any cooked dish. Without this seasoning, a person simply cannot do in everyday life. Salt, which dissolves in water and food, increases the amount of ions that activate all processes in the body. In addition, halite is used to purify water and remove scale.
· Medical industry. Salt is used both in conventional and folk medicine. With the help of this component, various medicines are prepared. Salt caves are also very popular for the treatment of people. They help to get rid of poor health, respiratory diseases and increase immunity.
· Metallurgical industry. There salt is used as a coolant.
· Chemical industry. Salt is used to make hydrochloric acid. It is also used as a tannin for making leather.
· Salt as a deicer. One of the main uses in the modern world for salt is to remove ice. Ice forms when the water temperature on roads reaches 0 degrees Celsius. And rock salt, as a de-icer, removes it from the road surface.

This method of deicing has been used for years and is still popular today. Mainly because it is fast acting. The reagent is combined with water on the road. After that, it begins to release heat, as a result of which the ice melts. Therefore, the connection between the road and the ice becomes weaker and it will be easy to remove it with an ordinary shovel.

For best results, it is better to buy rock salt in advance from trusted bulk rock salt suppliers. The most popular options are bagged rock salt or to buy in bulk for the whole winter season ahead. Rock salt today is a practical irreplaceable component in almost any field of activity. Whether it’s the food industry or the need to melt the ice on the road. It carries a lot of positive properties and perfectly copes with any tasks in any field of its application.