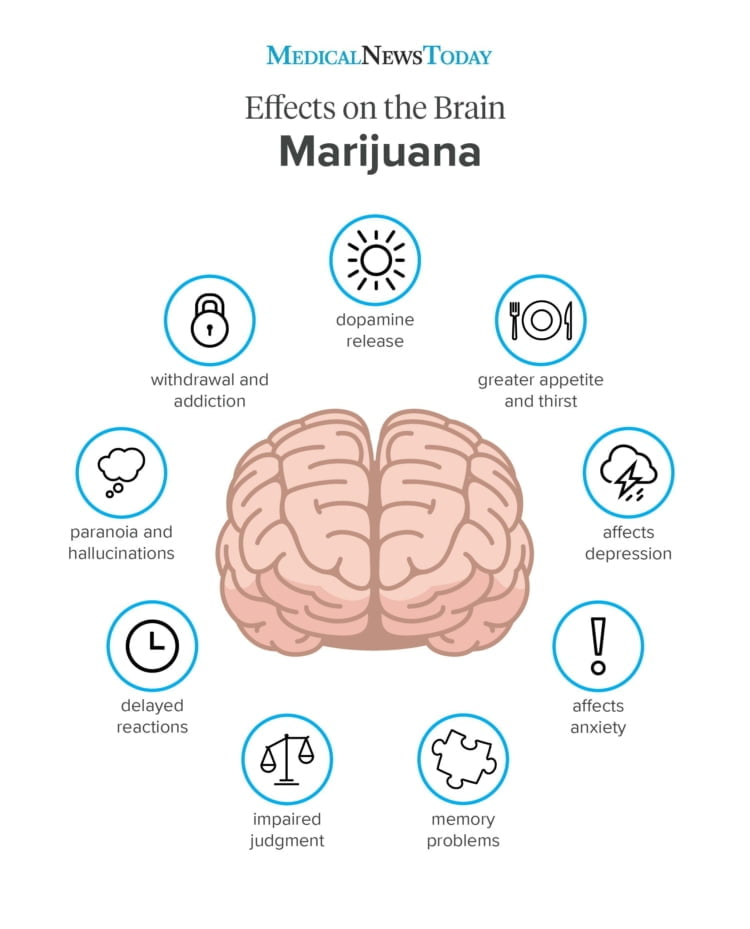 What are the Medical Causes and Effects of Marijuana Use?

Marijuana has several important health benefits including inflammation and pain reduction. Learn which weed strains are right for you.

Though marijuana has been used recreationally and medicinally for centuries, much is still misunderstood about its effects and uses. Fortunately, individuals and the medical community are becoming more open to the ways that marijuana can help ease both mental and physical conditions.

Here we will look at common reasons for marijuana use and the potential side effects. We will also look at CBD vs THC and how different weed strains can produce different effects.

What is the Difference Between CBD and THC?

Marijuana plants have over 100 different cannabinoids, chemicals that can produce various mental and physical effects. However, when it comes to medicinal use, the two most important cannabinoids are delta-9-tetrahydrocannabinol (THC) and cannabidiol (CBD).

While these two chemicals are similar in their composition, their effects are quite different. THC is known as the chemical in marijuana that produces a “high” feeling or euphoria. CBD, though it is thought to help with depression and anxiety, is not associated with the mental shifts or impairment that THC can produce.

CBD is often extracted to be used on its own in various creams, edibles, tinctures, etc. It can be ingested or applied to the skin to help ease pain, reduce anxiety, improve depression and more. THC can also have these effects but they are typically much stronger than just CBD on its own. Moreover, CBD does not have the sedative or euphoric effects that THC has.

Though the effects of CBD may be less, there are also fewer side effects. Most importantly, it will not impair your thinking or make it difficult for you to operate a vehicle. This is the primary reason laws surrounding CBD are quite different than for THC.

Effects of Marijuana Use

Along with the generally more positive effects of marijuana use such as relaxation, pain relief, and reduced anxiety, it can also have potential negative side effects. These can include headache, diarrhea, paranoia, memory loss, reduced motor skills, and increased heart rate.

Does CBD Have Side Effects? CBD, generally, has very few side effects for most users. However, it can produce dry mouth, diarrhea, and drowsiness. It can also affect the way other medications work in your system.

How to Reduce Negative Effects of Marijuana? It may seem counterintuitive that marijuana can both help to treat anxiety while also having the potential for causing anxiety. This is largely because marijuana intended for anxiety relief will have lower amounts of THC. The more THC you take, the more likely you will have negative outcomes.

To reduce the potential negatives of marijuana there are two important things to do 1) if you are taking marijuana for medicinal reasons, take what has been recommended or prescribed to you, not more. 2) If you are new to marijuana use, start slowly and learn what your tolerance is.

Similarly, even if you are a seasoned user of marijuana, you will need to learn your tolerance on different marijuana products. For example, if you have only ever smoked, your tolerance for edibles could be quite different.

Which Medications Does Marijuana Interact With?

Which Weed Strains are Right for You?

Marijuana is typically separated into three broad categories: sativa, indica, and hybrid. Generally, indica is known for having more mellow, relaxing effects while sativa is more energizing. Hybrid will have a combination of the two.

Within these categories, you will find individual weed strains with additional complexities and benefits. For example, Powdered Donuts is a weed strain in the category of Indica. This pre-rolled version of the strain not only has certain effects that are consistent with Indica, it is also known for its taste and scent of sweet citrus. Other weed strains are also cultivated for their strength, quality, and particular flavor or scent.

Why is Weed Not Having the Desired Effect?

If you have ever tried a sativa weed strain, which is supposed to be more of an upper, and found yourself sleepy, you are not alone. Though sativa may not put you to sleep the way an indica strain might, its THC levels can disrupt the sleep cycle and cause tiredness the next day.

More to the point, everyone will react differently to different weed strains. This is because of your personal physiology and also because indica, sativa, and hybrid do not have strict definitions. For example, some strains that are considered indica may be better for pain relief while others may be better for insomnia.

Additionally, popular, widespread weed strains may not be the same from every producer. For example, Acapulco Gold is a strain known for being energizing and inducing euphoria. A producer may sell seeds that have similar qualities to Acapulco Gold but not actually be genetically the same. If you purchase from a reliable source, you are likely to still get the results you seek even if it is not the exact strain.

Find the Right Marijuana Product for You

Along with different categories and strains, there are also several ways to get the effects of both THC and CBD. This includes edibles, vaping, inhalation, creams, and tinctures. Depending on the product you use, the effects can be altered. Ingesting cannabis, for example, will take longer to produce an effect but the effects will last longer as well.

Find the cannabis products that work for you by shopping at Weed Me’s selection of gummies, vapes, pre-rolls and more.

Do You Want to Try CBD Vapes but Worried About Quality?

How to Find the Perfect Packaging for Your Product

Do You Want to Try CBD Vapes but Worried About Quality?

How to Find the Perfect Packaging for Your Product