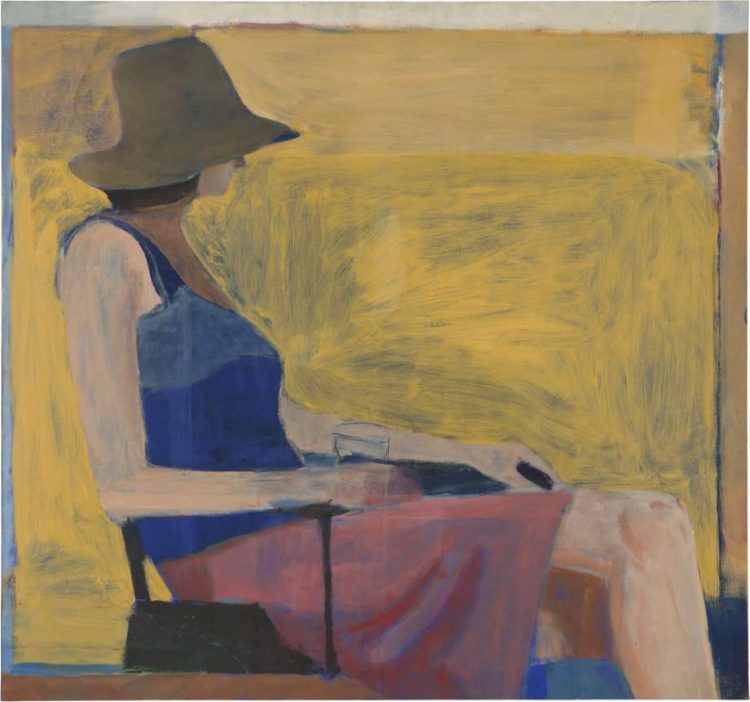 TWO MASTERS SIDE BY SIDE AT SFMOMA

There was a time when all art history classes required two projection screens. That was how, in pre-digital days, the instructor compared and contrasted works by different artists or of different periods.

“Matisse/Diebenkorn” is an art exhibition that feels a little like a freshman lecture on influence and inspiration, but with the essential difference that it’s composed of 100 original paintings and drawings by two great masters of their media, Henri Matisse and Richard Diebenkorn. The show opens at the San Francisco Museum of Modern Art on Saturday, March 11, and runs through May 29.

I first wrote, “incomparable masters.” The show, however, is all about comparison, with works presented in the same galleries, and even side by side. Some of the parallels are startling, as we see Diebenkorn making deliberate reference to Matisse’s love of pattern and enjoyment of formal disjuncture, his choices of subject matter and point of view, his technique of applying paint thickly in one place and rubbed thin in others.

Diebenkorn made no secret of his debt to the French painter. He often discussed it in interviews. He announced it specifically, artistically in a large work, “Recollections of a Visit to Leningrad,” which he painted in 1965 after seeing Matisse’s great “Red Room (Harmony in Red)” at the State Hermitage Museum.

The SFMOMA exhibition pairs those pictures and others, driving home the point to great effect in many cases. Matisse’s nearly abstract “View of Notre Dame” (1914), all dark lines and blue scumbling around a bright green tree-splotch, is convincingly played off Diebenkorn’s flatter, even more schematic “Ocean Park #79” (1975), which has borrowed delineation, brushwork and color.

Throughout the exhibition, library-style vitrines display selections from Diebenkorn’s extensive collection of books on Matisse, and the show’s catalog includes a full list of his holdings, noting his many insertions and inscriptions.

By the time a wall label tells us that a skirt in Diebenkorn’s “Man and Woman in a Large Room” (1957) “conjures the French artist’s unabashed love of stripes, as seen in ‘The Blue Eyes,’” we have no choice but to accede to the claim.

This is, in every way, an enjoyable show, put together with obvious care by top curators from SFMOMA (Janet Bishop) and its partner in the effort, the Baltimore Museum of Art (Katherine Rothkopf). Yet I will admit to feeling a bit unsatisfied in the end, like a man who enjoyed an excellent salad but suspects he missed something by not getting the steak.

We learn much about the enormous impact Matisse had on Diebenkorn’s thinking and practice. But did their work mean the same thing? Was the later artist simply updating the formal experiments of his predecessor — the look of his pictures — or his keen interest in otherwise-missed details of the home life of an artist?

The answer, if we respect Diebenkorn as an artist whose work holds relevance equal to Matisse’s for us today, is surely not. Matisse, at his best, was a revolutionary artist — a “fauve,” a wild beast. The very act of painting for him, in his time, was as much a rejection of certain habits of vision as an embrace of a new ideal of art.

By Diebenkorn’s day, that battle was long over. It is fascinating to watch him, through this exhibition, as he works out his obsession with Matisse’s brilliance. But it’s not a matter merely of adopting Matisse’s ways, or even of homage — though certainly we sense a high regard.

Where Matisse, product of his era, takes a romantic, even sentimental approach, Diebenkorn — in keeping with his own moment — maintains a greater distance. If Matisse gives us a glimpse of a palm tree and blue waters through the shutters of a darkened room, Diebenkorn shows us, beyond a doorway, the gas station across an expanse of asphalt. The plush chairs and couches of Matisse become folding chairs at Diebenkorn’s hand. Even Diebenkorn’s final, great “Ocean Park” series — after luring us close with dusty colors and textures we want to touch — impassively, coolly shuts us out.

Matisse’s “Pansies” (circa 1903) are compared in the exhibition to an untitled work done by Diebenkorn in 1964. Each shows flowers in a container on a brown table that takes up roughly the lower right quarter of the picture; each is against a predominantly light-blue field. “Pansies,” though, “nod(s) to the grand tradition of still-life painting from previous centuries,” as a wall text points out, by depicting a few flowers fallen from the vase to the table as a reminder of our mortality. The later painting includes no such memento mori. Where the background of “Pansies” is a patterned drapery, Diebenkorn’s vase (it may actually be an old jar, with label still affixed) is seen against three blank and blocky forms — windows, probably, but with no view.

Diebenkorn’s “Window” (1967), with its Matissian curled ironwork in the foreground, is compared to that artist’s “Large Reclining Nude” of 1935. How telling, though, that the flesh-colored form that commands the center of the Diebenkorn picture is no nude but a distinctly unwomanly, featureless rectangle.

The visual art media that is aspiring artists the most is ... Watercolour.