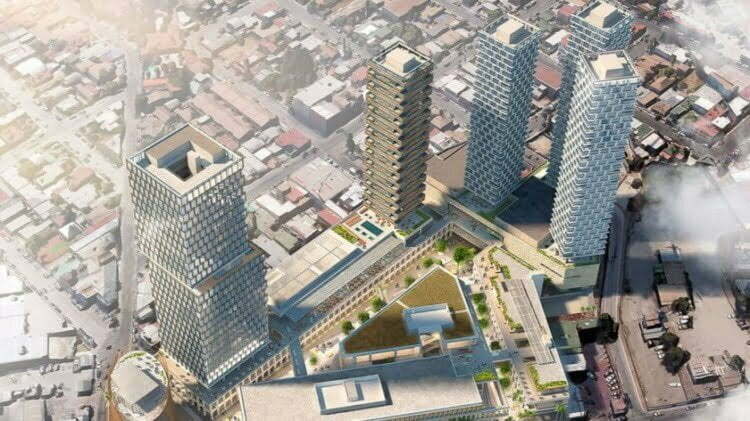 The Bajalta development will include 400 condos, a hotel and office building and mall. (Artha Capital)

Tijuana is experiencing a residential building boom in the upcoming years.

José Luis Corona didn’t expect to move back to Mexico when he left for the United States 12 years ago, but that was until he saw the Horizonte luxury condominiums in Tijuana.

The 54-year-old, originally from Mexico City, already owns a home in Chula Vista but decided about a year ago to get a $290,000 condo in Horizonte, which features a roof garden, gym, security and views overlooking the Club Campestre golf course and much of the city.

Corona, who works for an aerosol can manufacturer with offices in San Diego, said the quality he gets at Horizonte is substantial for the price — around $500,000 to $750,000 less than what the average new condo built in the last two years goes for in San Diego County.

“I like both places,” he said, “(but) I think things are improving a lot in Tijuana.”

Corona is one of hundreds of Mexican nationals who have embraced homeownership in Tijuana, a city long known for its transient population.

Developers are in the process of constructing roughly 2,000 condos over the next two years with towers that will drastically transform the skyline of Tijuana. Some of the planned towers, already approved by the Mexican government, are more than 30 stories and will become the tallest buildings in the city.

The prices are much cheaper than what is expected on the American side of the border, but aren’t exactly going for a paltry sum. Prices typically vary from $200,000 to $300,000 per unit, but there are some penthouses that have reached $700,000.

About half the buyers are Mexicans who work in San Diego County, according to real estate agency Probien. The other half are Mexicans who have benefited from Tijuana’s growing manufacturing sector or are retirees.

Americans are a non-factor, making up less than 2 percent of pre-sales, Probien said.

The building boom makes it the biggest residential construction push in the city in a decade and the most condo building in its history.

“Give us five years. The whole city is going to be vertical,” said Sergio Gonzalez, business developer for Probien.

It isn’t just the San Diego Regional Chamber of Commerce’s estimated 25,000 to 30,000 workers who cross the border northbound every day to work who can afford a new condo. Developers say there is pent up demand from years of meager construction during the recession and drug violence from 2008 to 2010.

Probien said it gets frequent calls from people looking for single-family homes, but like San Diego, the amount of buildable land is shrinking. So, developers have turned almost exclusively to condos.

Tijuana’s builders must contend with the shadow of Trump Ocean Baja, and other projects that went bust, causing Americans who invested to lose out on thousands of dollars.

Those projects failed, city leaders said, because they were financed by pre-sales of condos, so when the economy took a dive and some buyers pulled out, those projects abruptly halted. Today, developers working in Tijuana say most of the new development is already financed so construction won’t stop if buyers back out.

“There’s a lot of capital in Mexico right now,” said Hector Bustamante, director general of Bustamante Realty Group. “The difference (from before) is we have experienced  developers and we are doing our due diligence.”

Bustamante estimates more than $100 million will be invested in Tijuana condos over the next three years.

The crown jewel of Tijuana’s residential building boom is Bajalta, a 63-acre development in the center of the city with 400 condos that is scheduled to start construction this winter. The first residential units and retail components are expected to be finished by 2019.

Bajalta will have four residential towers, an office tower, hotel and a mall. The developer of the project is Mexico City-based Artha Capital (Almost all new condo construction in Tijuana is financed by Mexican sources). Bajalta is designed by New York based-SHoP Architects, which worked on the Uber headquarters in San Francisco and Google offices in Mountain View.

Mario Roberto Rubio, Artha Capital project director, said sale prices for the condos have not been set, but pre-sales will begin in November. The development is at the intersection of Agua Caliente and General Abelardo L. Rodriguez boulevards, the site of a former paint factory.

Artha Capital, a private equity firm that focuses on real estate investments in Mexico, says it has more than $500 million in assets under management. Its other current projects include a 2.9-acre shopping and entertainment center in Yucatan; a 13-story mixed use project in Veracruz with a three-story shopping center, movie theater, 10-story office tower and five-story hotel; and a 14.6-acre project in central Mexico with nine six-story office buildings.

For most of the projects, pre-sales typically require a 15 percent  to 30 percent down payment. The majority of developers and real estate agents in Tijuana are not as open about revealing sales prices as in the United States, preferring instead to wait until projects are closer to completion.

The flashiest new project is Adamant Tijuana, a 32-story tower near Estadio Caliente, the stadium used by Club Tijuana. Out of 180 units, 142 have already pre-sold, Adamant said.

Milk Life Investments, based in Mexico City, is currently building two other Adamant towers in Puebla and a third in Querétaro.

The first development most border crossers will see is NewCity Residencial, off Boulevard Padre Kino less than a mile from the border, which has ambitious plans to build more than 400 condos. For now, around 60 are for sale for $220,000 to $400,000.

Construction on NewCity began in 2006 and will include seven towers. The luxury condos are two to three bedrooms and some are already for sale. For example, a 1,883-square-foot three-bedroom unit with four bedrooms is going for $350,000 on Vivanuncios, a Mexican website similar to Redfin or Zillow.

NewCity’s Diamond Tower, 27 stories at 334 feet, is now the tallest building in Tijuana. The development also will include NewCity Medical Plaza, a 26-story tower with doctors offices, a medical lab, a surgery center, and a 140-room hotel. The fourth residential tower is expected to be completed by December 2017 but there is no set date yet for when a fifth tower will be completed.

Another closely watched project, Cosmopolitan Residences, is aiming to become LEED certified, which stands for Leadership in Energy and Environmental Design. There are just seven buildings in the city that have the environmentally-sensitive designation, says the U.S. Green Building Council.

Buyers in Tijuana have a much more challenging job finding a condo to purchase than their neighbors across the border. It can sometimes be difficult to find prices and locations of the latest projects. Very few developments have individual websites, and the ones that do often don’t include prices, size of units or detailed information about when construction starts or ends.

With condo and home prices rapidly rising in San Diego County, some real estate watchers are predicting Tijuana will become a viable option for San Diegans. But, buying instead of renting can get complicated.

Americans can buy a condo in Tijuana by establishing a trust with a Mexican bank that typically costs $2,500 and up, according to attorney Ben Rosen. It usually has a yearly fee of $500.

The trust runs for 50 years and whoever is a beneficiary of the trust can renew for another 50 years every time the deadline comes up. There can be multiple beneficiaries, and substitutes, so it is possible to pass the property on to children.

Still, broker Herb Kinsey, owner of MLS Baja Website, highly suggests getting a lawyer to help with the transaction and to keep in mind foreign buyers waive rights to Mexican government intervention in the case of a property dispute. Also, he said not all real estate agents in Mexico are equal.

“If you are told by a seller or agent that this beautiful piece of land on the border or this lovely house on the beach does not need to be in a corporation or in a trust,” he wrote on his website, “or it does not need to be closed by a notario, walk away immediately . . . and very quickly!”

The U.S. State Department does not keep track of how many Americans live in specific Mexican cities, just that there are more than 1 million U.S. citizens living in Mexico. Some experts say 50,000 Americans live in Baja California, but finding the exactly how they know that can be arduous.

Greg Shannon, a San Diego developer building a boutique hotel in Tijuana, said it makes sense for San Diegans to seek housing south of the border, especially with increasing prices.

About 52 percent of San Diegans owned their own home in 2015, but that figure has continued to decline from its 1960 peak of 58.6 percent, according to the U.S. Census. San Diego County’s homeownership rate in 2015 was one of the lowest of any metro area in the United States and below the national average of 62.9 percent.

“I think it makes a lot of sense depending where you work,” Shannon said of Americans living in Tijuana. “I know a lot of people that enjoy the lifestyle. It’s definitely more laid back.”

Shannon and others acknowledge the border crossing as the biggest barrier for San Diego workers living in Tijuana, although recent improvements have made the trip much easier. The U.S. Customs and Border Protection’s SENTRI system, which allows for pre-screening of travelers, can — on a good day — make the trip less than 10 minutes.

Even with new ways to speed up crossing the border, horror stories of getting stuck at the border for hours are common place.

“The pressure for inexpensive quality housing might find its way in Tijuana in the same way it finds its way, to a much larger extent, into Murrieta (Riverside County),” he said. “It’s simply too expensive for people with low-paying jobs to live here.”

London said San Diego’s dependence on Tijuana workers, especially in the hotel industry, and a substantial number of their children attending school in the United States, have already laid the ground work for future housing solutions.

“This idea that they are building large condo projects in Tijuana is unprecedented,” he said. “It makes it feel more like San Diego.”

Yet, Probien’s Sergio Gonzalez says he needs to be realistic about Americans buying condos in Tijuana. He knows the border crossing is an issue, there is a language barrier and San Diego is an amazing place to live.

“It takes a village. It takes the government. Municipal, federal and state government to actually make this work,” he said. “For us to appeal to the American market, everyone needs to work on this.”