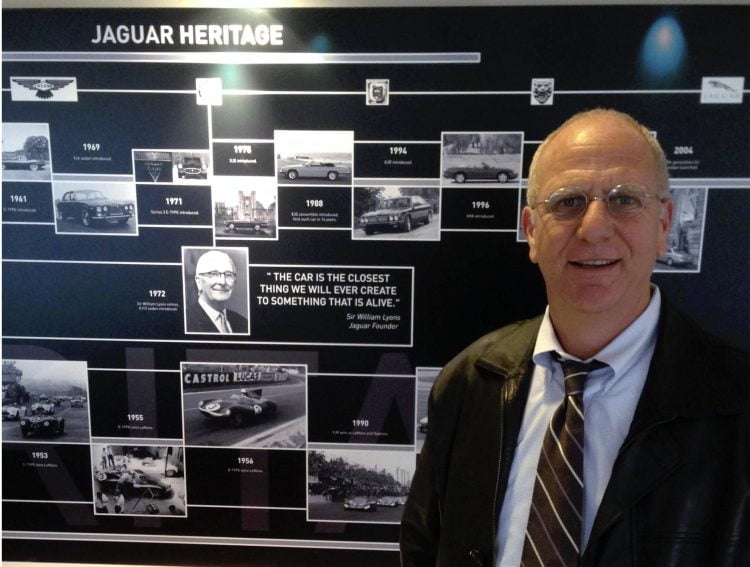 Sir William Lyons, the original creator of Jaguar, has made quite an impact on millions of people over time, including Joe Saeh. 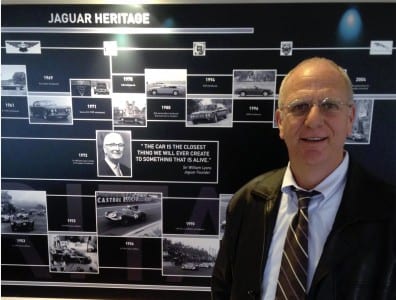 OVER JOE SAEH’S RIGHT SHOULDER IS A PLAQUE THAT READS: “The car is the closest thing we will ever create to something that is alive.” – Sir William Lyons.

Just a few feet away from Saeh’s desk at the Jaguar Land Rover Anaheim Hills dealership is another tribute to Lyons – a full scale poster that illustrates the timeline of Lyons’ Jaguar from its inception.

“Sir William Lyons was responsible for the styling of every new model Jaguar introduced,” Saeh says. “It was quite remarkable because he wasn’t a trained draughtsman. He designed Jaguar cars using full scale 3-D mockups.”

Even though Lyons had partners and a team behind him, he is considered most responsible for the Jaguar vehicles the world admires today. Jaguar owners are likely unaware of the influence Lyons had in shaping the sensual body lines that carry through to the designs of today. After all, you won’t see his name on the trunk lid like you might see on a Porsche or a Ferrari. That wasn’t Lyons’ style. His was understated elegance and grace.

Lyons’ legacy remains as large as ever today, his mark indelibly etched in every Jaguar. Even now, nearly three decades after his death in 1985, his influence is still seen. The newest XJ Series incorporates modifications suggested by Lyons himself.

“Without Sir William Lyons, there most certainly would not have been the Jaguar as we know it,” Saeh says.

And the automotive world would have been deprived of one of the greatest motorcars ever conceived and produced. 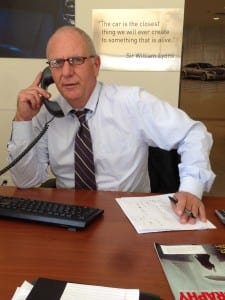 Saeh has always admired Jaguar and Land Rover, two of the most iconic British automobile brands. Yet in all his years in the automotive industry, Saeh never worked with either vehicle.

When a friend of his joined the Rusnak Auto Group’s Jaguar Land Rover Anaheim Hills dealership, he reached out and eventually joined the sales team.

“My life has changed since coming here,” he says. “I feel like I wasted a lot of years by not making this change earlier in order to experience these two vehicles.”

No one embraces Jaguar and Land Rover more than Saeh. He’s head over heels in love with these vehicles.

“Jaguar is a trending product,” he says. “It’s the hidden jewel amongst the sea of luxury cars. Based on what you get out of Jaguar compared to other cars in its class, it’s no contest – Jaguar wins. When you look at the other cars in this class, Jaguar is the clear winner, period – in my opinion.”

Not only did Jaguar record a 42% year on year increase in sales in 2013 – its strongest full year sales performance since 2005, but from all indications, 2014 is expected to exceed, according to various media reports. Additionally, the 2014 Jaguar F-Type and 2014 Jaguar XJR were named 2014 Top-Rated Vehicles by Edmunds.com; Jaguar was also awarded the 2014 Kelley Blue Book Brand Image Award for “Best Car Styling Luxury Brand;” and for four consecutive years, Jaguar’s F-Type Convertible has been Automobile Magazine “All-Star” for its part in redefining and modernizing the brand.

When asked about Land Rover, Saeh slowly shakes his head and smiles. For just a moment, he’s speechless. Then, he says, “Land Rover is the most exciting product I’ve had the pleasure to be involved with after so many years with other luxury lines. To me, Land Rover is the leader of the SUV. It’s royalty. If you own a luxury-line SUV or vehicle, and it’s not a Land Rover, there’s something wrong. You need to try it. You have to try it. You’re missing something if you don’t. You’re losing out on something spectacular.”

He pauses and continues: “Land Rover will change your life,” he says. “It’s built like an airplane. No manufacturer does what Land Rover does. Where else can you leave your driver’s door open with the vehicle tilted at a 39-degree angle and get out of the car without it tipping over. No where. I challenge anyone to try it. Most cars can’t do that at any significant angle, let alone 39 degrees.”

Saeh rises from his chair and paces for a moment, gathering his thoughts.

“If you want to be different, you drive a Land Rover,” he says. “It’s above and beyond every other vehicle. It will take you wherever you want to go with no issues whatsoever. I wish I began selling this car 15 years ago. But better late than never. Now is the perfect time too. It was a very luxurious car then. And more so now.” 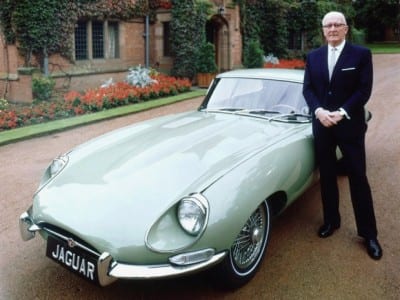 As for Jaguar, well, Saeh can’t say enough, either.

“I’m fascinated with everything Jaguar, particularly with Sir Williams Lyons and how he created it,” he says.

Born in Blackpool, England in 1901, Lyons lived in the fast lane, fascinated with speed, motorcycles and cars.

As a teen, Lyons would often be seen zipping around his hometown on a motorcycle.

Across the street from Lyons lived William Walmsley, who created a stylish “octagonal-shaped” sidecar called “The Swallow.” Intrigued, Lyons bought one. He later convinced his neighbor that the general public would like a chicer version of the otherwise “ordinary” sidecar.

Wansley like the idea and soon they became business partners. 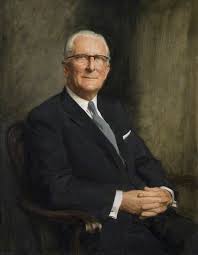 Lyons exhibited a phenomenal business sense — quite amazing for someone without formal training at the age of 20. He convinced Walmsley that they could increase production — and profits — by securing a larger workspace as Walmsley’s garage was far too small for Lyons’ big production dreams.

In 1922, they created the Swallow Sidecar Company, which turned the automobile world upside down when they designed and built a stylish two-seater vehicle. At that time, most auto builders offered basic, no frills black cars. The sight of a modish two color-toned Swallow was astonishing to the public.

Soon, Lyons and Walmsley moved their operations to the English countryside, where production went from 12 cars a week to 50.

“William Lyons was clearly ahead of his time as he began designing the themes and characteristics that now distinguish all Jaguars,” Saeh says.

Other manufacturer’s engines and chassis placed styling restrictions on the free-thinking Lyons, so he decided to design his own. And this led to the development of Jaguar. Lyons tinkered with the names Gazelle and Hawk before settling on Jaguar.

At the time, the motoring world lacked Lyons’ inspiration and originality — and the automotive press raved about his innovations, particularly the new Jaguar.

“All the attributes of sports models are incorporated in a refined manner, and this, coupled with a striking appearance, is bound to attract enthusiastic motorists of modest means,” wrote one journalist.

Lyons continued to strive for his cars to have the best performance. He hired the best engineers he could find and surrounded himself with most talented and motivated experts to develop an engine that would be worthy of his new Jaguar line. 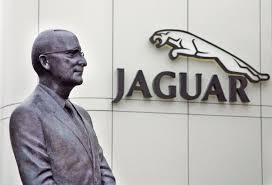 When Lyons unveiled the Jaguar line, the motoring world was thrown for a loop. As impressed as they were with the car’s stylish looks and performance, they were surprised to learn that the cars would sell for about half of what they collectively estimated it would cost.

Following the success of the first four-door Jaguar, Lyons switched gears and turned his attention to developing a true Jaguar sports car. The result was the very striking vehicle that one journalist said “was the epitome of the stylish pre-war sports car.”

Lyons’ beautiful new flowing Jaguar shape screamed speed — and when a new 3.5 litre engine was added to the range, a car of vivid performance was the result.

Today, Lyons’ legacy is as powerful as ever.

“His impact on the automobile world was staggering and it will never be forgotten,” Saeh says. “It’s wonderful to be part of his legacy.”