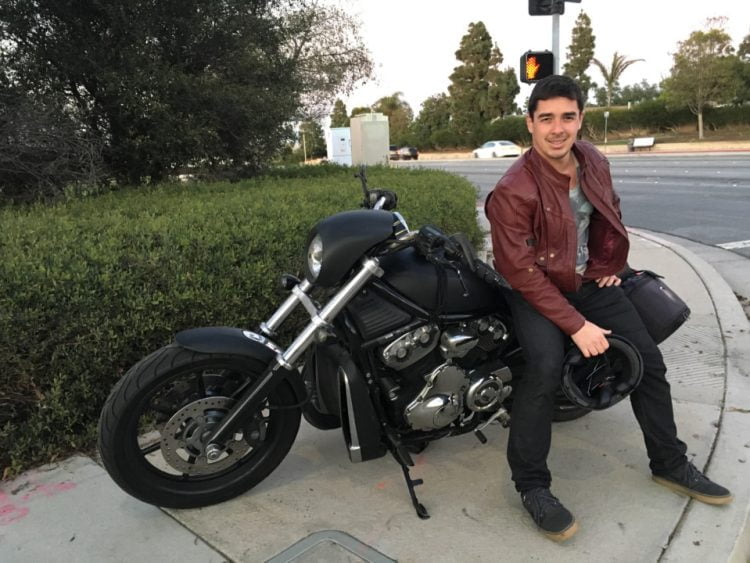 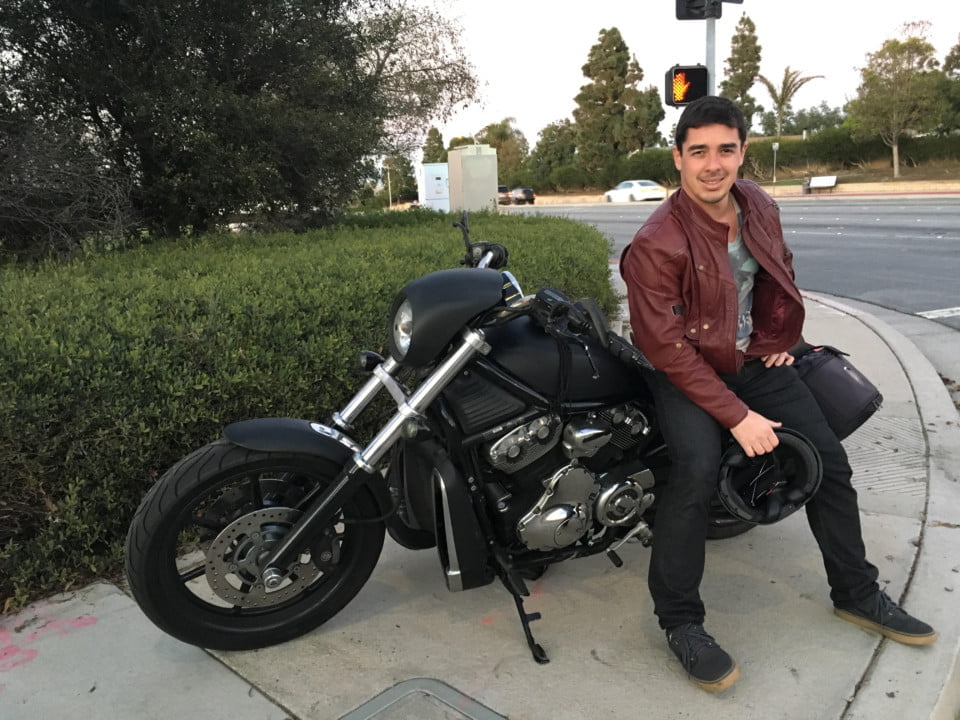 While recovering from a broken hand suffered in a motorcycle crash, Guillermo Cornejo came up with a brainstorm of an idea: a motorcycle sharing business.

This is how a great entrepreneurial idea evolves: Guillermo Cornejo was sitting in his Fort Worth, Texas apartment nursing a broken hand that he sustained in a motorcycle crash. The injury cost him thousands of dollars in medical bills, depriving him of the opportunity to buy the new motorcycle that he had his eyes on.

He had no alternative but to start looking into renting a motorcycle. “As my hand healed, I knew I’d get the urge to ride as soon – to get that adrenaline rush,” he says.

When Cornejo inquired about motorcycle rentals, he found they were quite expensive – nearly $200 a day. “That wasn’t an option for me – not with thousands of dollars in medical bills,” he says. “I figured I might as well buy a new bike and make a monthly payment.”

He continued to research alternatives to see if there was something cheaper. He couldn’t find anything. Suddenly, he glanced out of his kitchen window and noticed his neighbor’s motorcycle propped up on the side of the house.

“It dawned on me: ‘My neighbor is at work, yet there’s his motorcycle, sitting around all day not being used,’” Cornejo says. “I was sitting there wanting to ride and there’s my neighbor’s bike sitting there being unused. What a waste.”

Then it struck him: a motorcycle sharing community. He jumped on his cell phone and started calling automobile sharing companies like Turo and Getaround to find out if they rented motorcycles. They didn’t.

“Fine — no one is doing it so I’ll do it myself,” Cornejo said to himself. 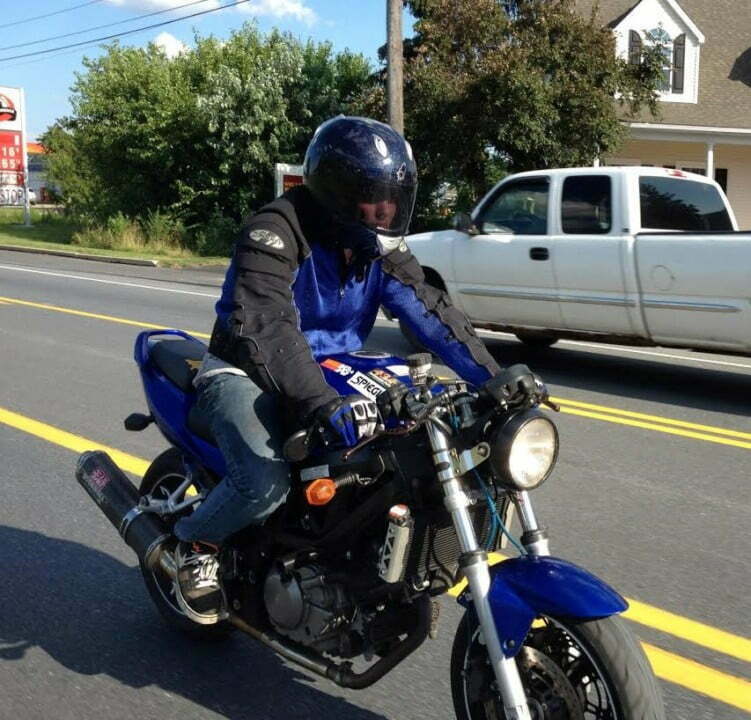 Further research showed Cornejo that the average annual motorcycle mileage is 3,000 miles vs. 12,000 for automobiles. “That confirmed it – that told me that motorcycles were just laying around in a person’s garage or driveway while they used their car to go back and forth to work,” he says.

Then, at that very moment, he thought of AirBNB’s business model and decided it would work for motorcycles too.

What evolved was RidersShare – the AirBNB for motorcycles.

Today, two years after its inception, Cornejo’s business is taking off.

Cornejo’s first move was moving to California, which he strategically targeted as one of largest markets for motorcycle rentals, specifically Orange County and Los Angeles.

“Southern Californians can ride all year round because of the great weather and the number of great riding trails and roads,” he says.

Step II was developing a business plan and obtaining funding.

While developing the business plan, Cornejo wondered why motorcycle sharing companies were nearly nonexistent. The answer is clear: too many accidents, too much risk.

So he decided RidersShare would minimize risk by renting to riders only 25 years or older. He minimizes further risk by requiring a motorcycle license of at least three years. “That way, we knew they’re experienced riders,” he says.

What that did was reduce RidersShare’s insurance exposure and generate additional revenue through its insurance policies. 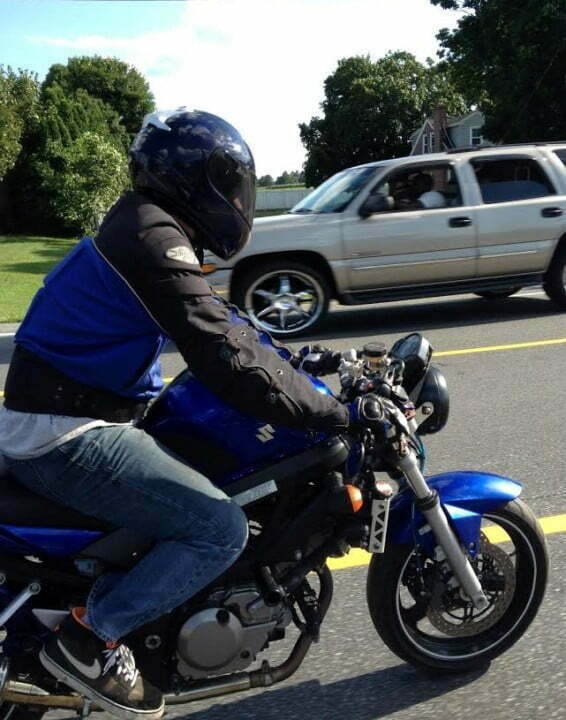 As with any entrepreneur, the big question is where the funding will come from. Cornejo used every penny he had then won an idea competition called The Mill that brought him the $5,000 prize.

That captured the attention of Chuck Pettid, a New Yorker who runs the venture capital fund called RainMakeMe. Instantly, Pettid was enamored with Cornejo and his business model.

Pettid receives seven entrepreneurial proposals and pitches per day. It’s not easy for any of them to get to Step II with him.

“RidersShare starts with Guillermo,” Pettid says. “He’s an amazing guy who knows what he’s doing. He impressed me immediately. He recognized a great business opportunity and clearly communicated how he would execute his plan. To me, it was more about him than anything else. Anyone can have a great idea. What it really comes down to is the individual and their ability to execute it. Guillermo was night and day vs. other entrepreneurs I’ve met with. It was easy for me to recognize we had something special here.”

RidersShare receives 25 percent on each motorcycle rental. It also takes in revenue through its insurance policies. Cornejo envisions renting 500 motorcycles monthly with revenues hitting $1 million by the summer of 2018.

“When I first heard Guillermo’s pitch, I hadn’t heard of a business model like it before and there weren’t any competitors actively involved in the market,” Pettid says. “It’s a slam dunk of an idea and with a guy like Guillermo behind it, there is no doubt in my mind that he is going to hit his goals.” 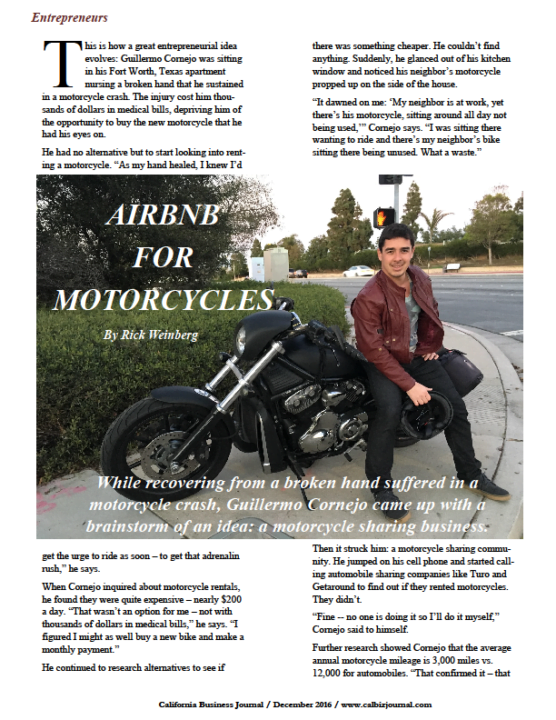 How Much Do Motorcycle Accidents Cost On Average?

Understanding the Responsibilities of a Motorcycle Accident Lawyer