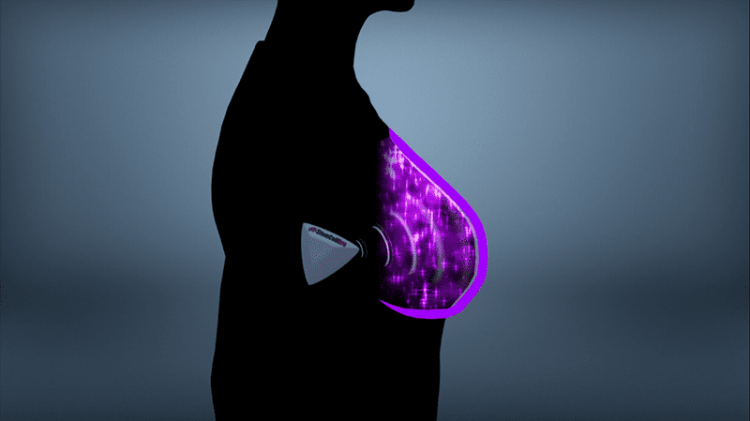 After years of development, a revolutionary bra is set to change the world for women struggling with milk production, breast size and other adversities. John Grosso, Howard Leonhardt, Dr. Jorge Genovese and Dr. Leslie Miller have teamed up to create what may soon be one the hottest products on the market: The Stem Cell Bra.

Imagine enlarging the size of breasts without going under the knife.

Thanks to John Grosso, President of Stem Cell Bra, Chief Medical Officer Dr. Leslie Miller and inventors Howard Leonhardt and Dr. Jorge Genovese, that concept is not implausible at all.

In fact, it is now completely within reach.

Grosso, Leonhardt, Genovese and Miller have been working together for seven years to bring this product to life — and the stages of the testing has been miraculously successful.

Grosso spent seven years developing a shape-conforming bra with actor Peta Wilson of the La Femme Nikita TV series. The bra ended up being ideal for this new stem cell application. Miller and his colleagues had separately developed a patent-pending bioelectric stimulator — originally designed to home stem cells to heart scar tissue after a heart attack — that was adaptable to home stem cells to breast tissue.

“The discovery actually happened by accident,” Leonhardt says. “The doctors were treating a mouse for heart attack recovery and the electrical conduction probe connected to the external bioelectric stimulation signal generator accidently slipped out of the mouse heart and landed in the breast tissue. Surprisingly, the team observed an increase of the breast tissue volume as a side effect of this slippage and Stem Cell Bra was born by serendipity.”

When Grosso and Wilson — and their shape-conforming bra — met Leonhardt, Genovese and Miller – and their bioelectric signaling system for breast tissue regeneration – it was a natural match for the two groups to join forces. What followed was successful animal studies using bioelectric stimulation to stimulate the native genes and proteins responsible for tissue regeneration in the body – with specific signals for native breast development.

The team took its animal-testing phase to Argentina where they began painlessly stimulating one breast in a sheep for one hour at a time three days per week for four weeks. It led to a 20% increase in breast size with a biopsy of the breast showing an increase in normal glandular tissue.

Next, the groundbreaking team stimulated the utters of three different species of cattle that showed the physiologic result of similar stimulation of an average 15% increase in milk production. The increase, in mild production, lasted for over two months once the stimulation was discontinued and the biopsies of the utter confirmed only normal glandular tissue enlargement.

The first clinical trials began in Brazil and South Africa. The next step is bringing the trials to the U.S. At this time, the product is being assembled outside of the U.S. primarily from U.S. and Australian-sourced components.

The best part about the Stem Cell Bra? “No pain and no discomfort,” Miller says, enthusiastically. He adds: “it is simply a potentially safe and painless way to enhance the size of breasts enhancing normal tissue.  We are committed to undertaking properly controlled studies in small steps with patient safety put first to prove this out over time.”

Miller is author or co-author of 240 peer-reviewed publications and was an investigator in 80 FDA-cleared clinical trials. He was Chairman of Cardiovascular Medicine at the University of Minnesota for more than a decade and co-editor of one of the leading textbooks on regenerative medicine.

The Stem Cell Bra may potentially be beneficial for women who come out of surgery, according to Grosso. Whether the surgery is one for breast enhancement, a mastectomy, a double mastectomy, or anything else, women are not allowed to wear wire bras “because it can be very painful and dangerous,” he says.

The Stem Cell Bra changes that because it does not have the same functionality as a wire bra. Instead, it is lined with a conductive gelatin that, with the help of a bioelectric stimulator, works to enlarge breast size. What makes the bra more unique from others is the way it is fitted, Grosso says.

“A women changes shape every month,” he adds. “They have their cycles. They have their moments throughout the month. So what ends up happening is that sometimes one breast is bigger than the other.”

This isn’t just during a woman’s cycle — it is common for women to have one breast that is slightly bigger than the other. Thus, she is left with a bra that “just fits ok,” as Grosso puts it, “so the $300 bra she bought ends up leaving her dissatisfied.”

The Stem Cell Bra accommodates cup sizes A-G because of its “adjustability strap that adjusts 4-8 inches on each side,” Grosso says.

It is so comfortable, in fact, that when tested on the cattle and sheep in Argentina, the animals fell asleep while wearing it.

Using the Stem Cell Bra will also save money that would otherwise have to be used for breast augmentation or other invasive procedures. “It will cost far less than any surgery,” Grosso says.

Better yet, the bra — and the work that it does — is all-natural. 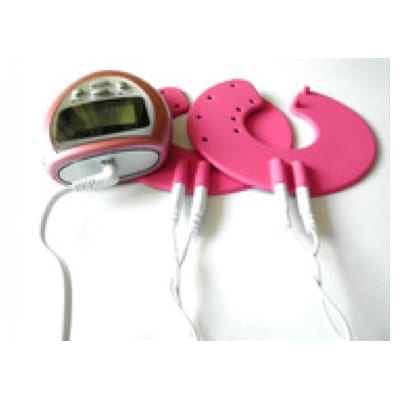 The human trials in progress in South Africa and Brazil will lead into studies in the U.S. to help gather the data required by the FDA to start studies.

The team is working with cGMP certified suppliers for stimulators and gel tape electrodes that already have FDA market clearance for other indications of use such as improving blood circulation, pain relief and accelerated healing.

“We are gathering sufficient data in properly-controlled studies over time to authorize broadening of the indications of use labelling for the already market cleared products,” Grosso says.

At this time, the bra is only available for investigational use in South Africa and Brazil. Safety and efficacy have not yet been proven.

In addition to the Stem Cell Bra, Leonhardt’s Launchpads innovation and startup accelerator has 29 other startups in its 2019 portfolio class.  All but one is based on the same core IP platform of applying bioelectric signaling, including stem cell homing, and when needed biologics to organ regeneration and recovery.

“For every disease or condition we can think of, there exists encouraging evidence that we can stimulate the release local proteins, such as Klotho, sonic hedgehog, SDF1, IGF1, tropoelastin and PDGF that can potentially result in native tissue regeneration,” Miller says.

When asked how the team goes about testing this wide array of ground-breaking medical-related products, Miller shared this intriguing analogy: “Imagine an old wave radio and when turning the knob to find the best reception, you get static and then it becomes a crystal-clear signal. Then it fades out again on the other side. We have been able to identify over 25 signals that when delivered into target tissues results in significant increase in that protein right where we want to stimulate. Sometimes, it’s almost too good to be true.”

Some of Grosso’s and Miller’s other current projects on personal health treatments including ErectiSTIM to aid with erectile dysfunction, treatment of skin and hair regeneration using a very potent new anti-aging gene signal, as well as a range of treatment from painful osteoarthritis in large joints to wound healing.

“We believe that our platform of tissue and organ regeneration is applicable to all forms of tissue damage or dysfunction. We have 30 companies with the Accelerator focused on a wide variety of conditions,” Leonhardt says.

With all the projects happening at the same time, the most significant buzz is about the Stem Cell Bra.

“There are many regenerative factors outside of only an increase in breast size. We are talking about the many issues of elasticity, as well as repairs and issues outside of just trying to grow the breast,” Grosso says.

“We are excited about delivering a service that many women are very interested in,” Miller says. “The alternatives are high costs and possible disfiguration. The bra is simple, easy, and fulfills the science we found in animals to help women across the world.”

As the team is quick to point out, the bra is in the earliest stages of clinical investigation and does not imply – in any way — that safety or efficacy has been proven yet despite the encouraging results in large animals, Grosso says.

“The research investigators are proceeding slowly with great caution putting safety first and starting with very low dosing times,” he adds. “All patients must be cleared through thorough breast cancer examinations before being permitted into these early pilot studies.” 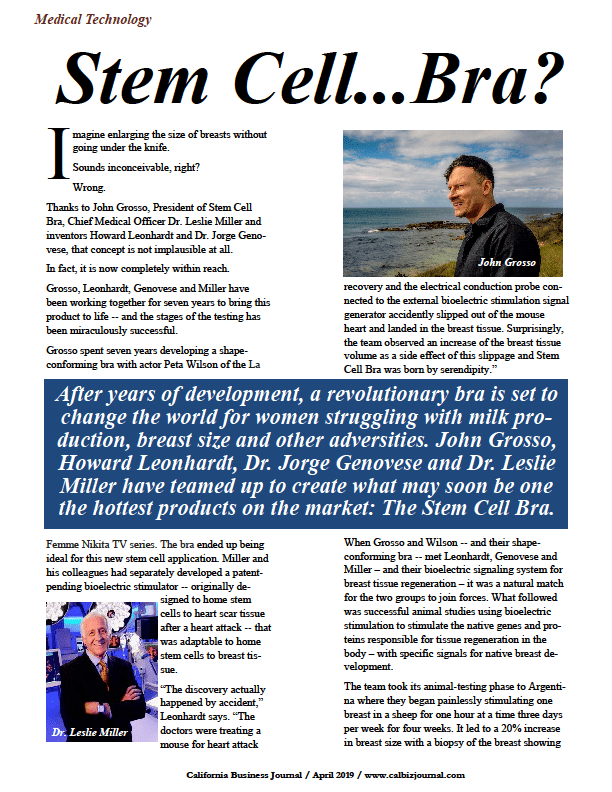 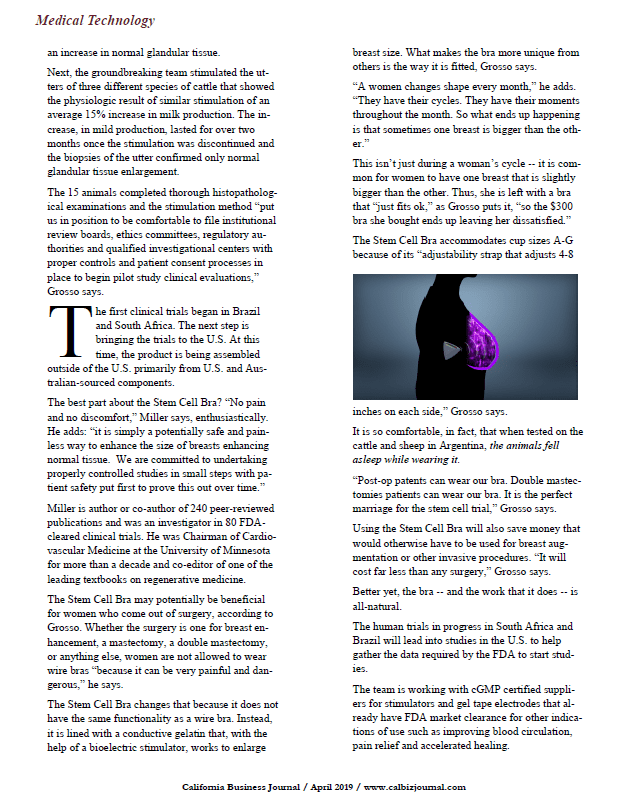 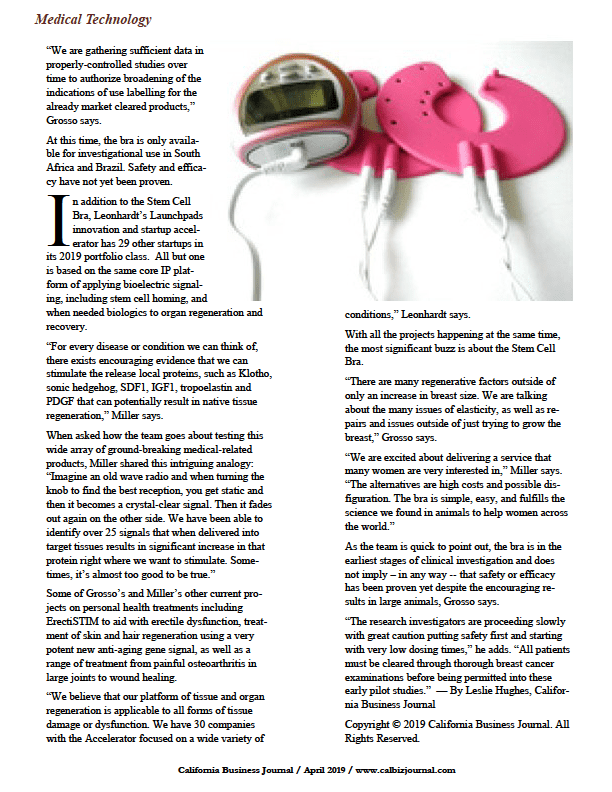