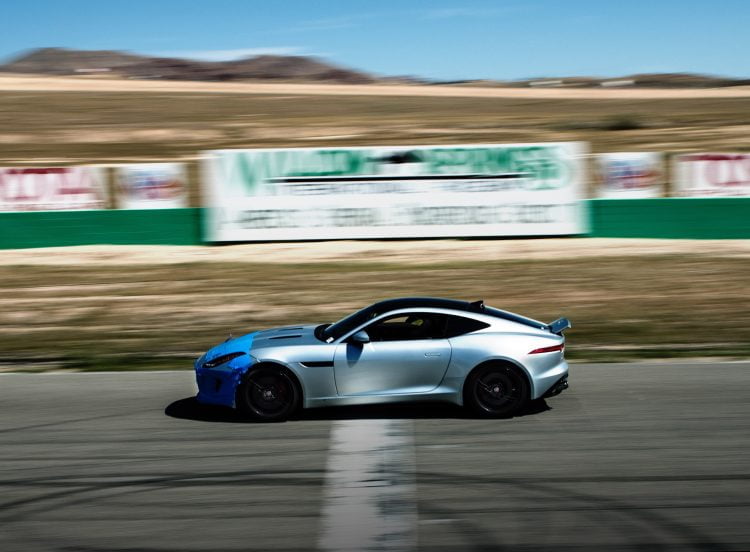 The smooth-handling 2015 Jaguar F-TYPE R Coupe was the Star of the Day at the 4th Annual LACC/JDRF Track Day Invitational at Willow Springs International Speedway.

An uber-impressive lineup of performance cars — totaling more than $20 million dollars in value — graced the Willow Springs International Raceway in Rosamond, California for the 4th annual LA Car Connection/Juvenile Diabetes Research Foundation Track Day Invitational. Drivers flew in from as far as Michigan — some even flew in locally by private helicopter — for a spin on the world-renowned race track.

In the midst of the luxury lineup was the incredibly powerful, smooth-handling 2015 Jaguar F-TYPE R Coupe, provided by the Rusnak Auto Group’s newest dealership, Jaguar Land Rover Anaheim Hills. General Manager Sven Larson even scored Tony Hunt, a 10-time U.S. Auto Club champion, to “show off” what the Jaguar can do.

“Jaguar’s 2014 F-TYPE R was the best one they ever made — until this one,” says Hunt, who is considered one of the most versatile drivers in U.S. Auto Club history.

With its blistering 550 HP Supercharged V8 and extraordinary handling and performance, “this is a sports car for the youthful ‘immediate gratification’ crowd,” Hunt says.

“What amazes me is that not only does it have 550 horses but it also has incomparable balance of handling. To me, that’s rare. If you have too much horsepower and not enough performance to handle it, you’ve made a beast that’s not driver friendly for the performance-minded enthusiast. But because Jaguar incorporates both balance and performance, it’s a real driver’s vehicle.”

It is easily Jaguar’s most powerful series-production sports car ever. What Jaguar has done in recent years is “unprecedented,” Hunt says. “They recreated their image, emphasized the performance of the vehicle and brought a tremendous amount to the table with its superb handling dynamics. And every year, they tweak it a little and keep on making it better.”

The two sleek new Jaguars on this gorgeous California day at Willow Springs drew by far the most attention. Participants were required to sign up to drive specific vehicles. The demand to experience the Jaguar was so high that organizers had to add the second Jaguar — with a second professional driver, Renan Bayar, a veteran race car driver who is also a professional pilot for The Eagles.

“That’s a first,” said event coordinator Eric Brooks, President of L.A. Car Connection, regarding the overwhelming response to drive the Jaguar. “And probably not the last,” he quickly added with a smile.

That’s how special this new Jaguar is.

Larson and Brooks ensured that every cent collected for the opportunity to drive either of the two F-TYPE’s on the track was donated to the Juvenile Diabetes Research Foundation.

The atmosphere on this magnificent sun-splashed day was electric from the moment both organizers and participants arrived at the historic race track. Everything from classic car tunes to Coachella hits blared from huge speakers as rows of high performance rolling thunder lined up and sped off, some reaching speeds as high as 165 on one of the country’s fastest and most challenging tracks.

“Listen to that – that’s the best sound of any car here,” says participant Dennis Misetich as the Jaguar F-TYPE raced by like a silver flash of lightning. “It’s the ‘throatiest’ car here.”

No doubt, the extraordinary sound of the F-TYPE R under full throttle is music to the ears of any performance auto enthusiast.

As two other participants awaited their turns to drive the stunning new Jaguar, one said: “The sound of that is wicked.” 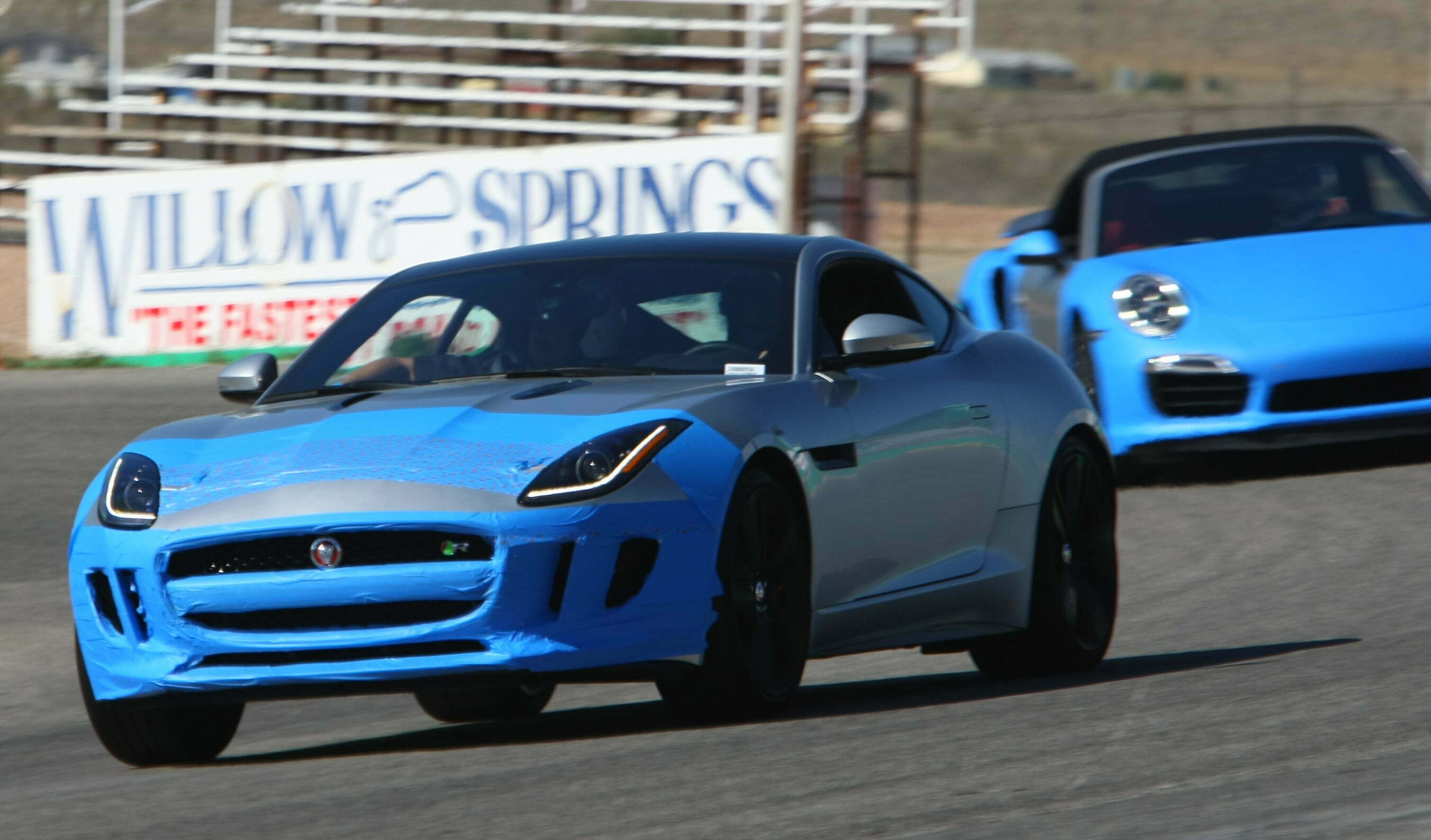 What they got was the “drive of a lifetime,” LA real estate mogul Gary Simons said.

For more than a half century, Ron Sluyter fantasized about racing a Jaguar sports car on a wide-open track where he could “open it up” and experience the thrill of the iconic British brand first-hand. He finally got that opportunity – at the age 68 – on this day. He flew in from Ann Arbor, Michigan – a 2,250-mile trek — for the event.

“Driving this Jaguar was on my bucket list,” he says with a smile as he slips into the cockpit-like cabin of the exquisite F-TYPE R. When he returned from his Jaguar racing adventure, he was initially speechless. “The wait was worth it,” he says, wiping a bead of sweat from his brow. Calling it “awesome” and “spectacular” just doesn’t do it justice, he points out. “It’s well beyond that,” he adds. And Sluyter knows cars, having worked at Ford for 30 years as an engineer.

“This is absolutely the best car I’ve ever been in, let alone driven.” He was surprised when he found himself neck and neck on the straightaway with some of the world’s fastest machines, including a Porsche 911 Turbo – “and I’m no race car driver,” he quickly adds with a laugh.

When Bayar was asked about the F-TYPE R, he said, “I love it. For as large and as sexy as it is, it handles like a [NASCAR] Sprint Series Cup Car – it’s like a street legal factory race car. I really can’t say enough about it – as a daily driver, it blows them all away.” 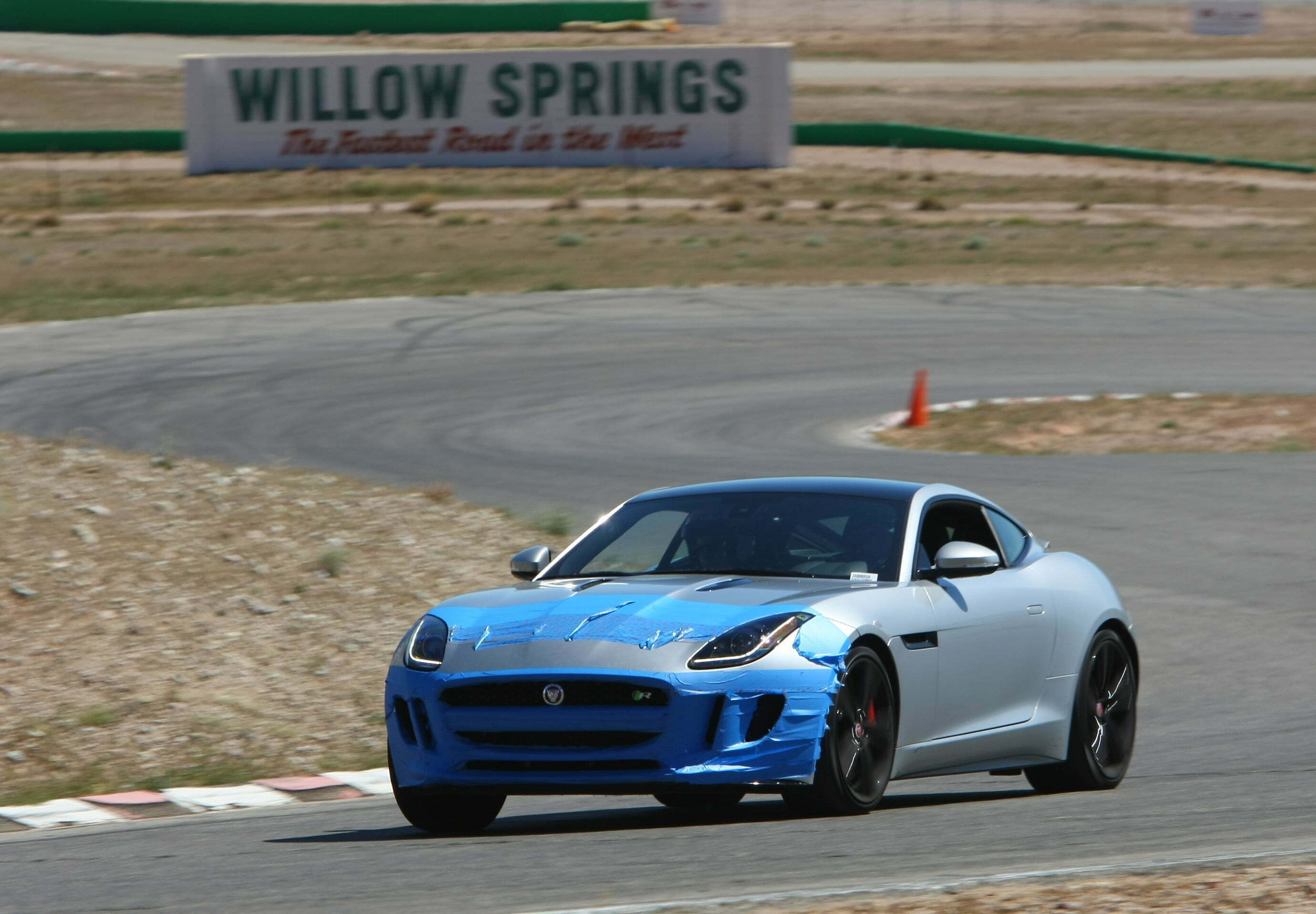 One driver called it “sex on four wheels” as he marveled at the sound of the switchable exhaust baffle, which “releases an unbelievable beast under this lid. It feels like a race car, not an everyday car, which is quite amazing.”

At the end of the day, the mission was accomplished by both LA Car Connection and Jaguar Land Rover Anaheim Hills. All participants had an unforgettable time — and through donations, a silent auction and a live auction, more than $90,000 was raised to support the efforts of the Juvenile Diabetes Research Foundation – a new all-time record for the event. 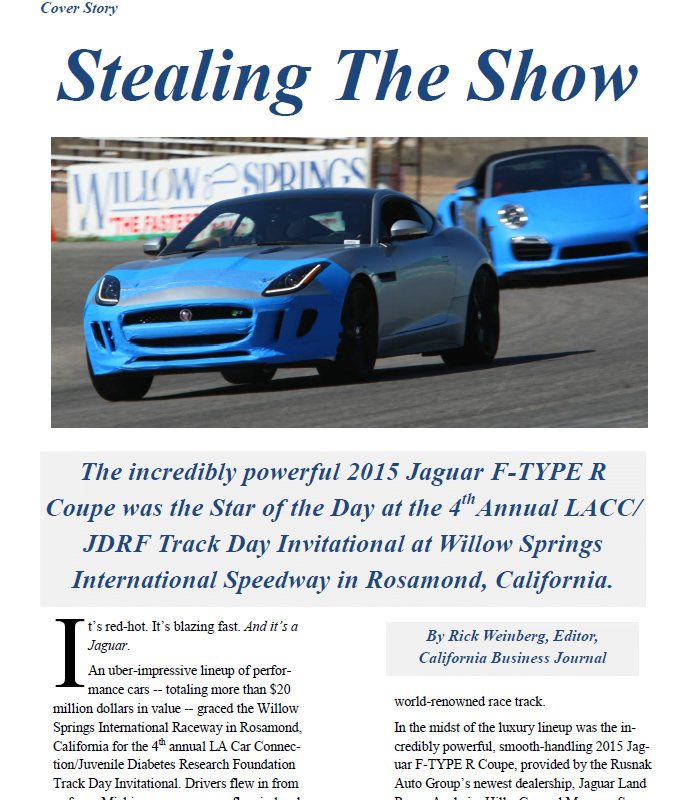