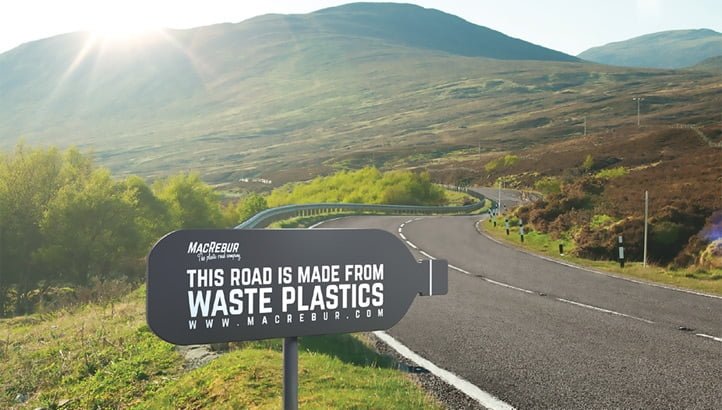 Revolutionary Breakthrough: Plastic Destined for Landfill Transformed For Use in Road Mix

For Toby McCartney, it began with a “Dad Moment” at his daughter’s school assembly. “The assembly was based on ‘What Lives in our Oceans’ and I remember one girl saying ‘Fish,’ and then a boy says, ‘Whales and dolphins.’  And when my daughter put her hand up, she said, ‘Plastics,'” McCartney recalls.

On the way home that evening, “I asked my daughter about her answer. She said she had read on the Internet that by the time she reached the age of her mother and I, it was expected that the oceans would be filled more with plastics than fish,” McCartney says. “After looking at her research – we saw she was right.”

Further familial exchanges paved the way for McCartney’s new mission as co-founder and CEO of MacRebur. Working as a professional public speaker and training others to overcome public speaking fears, McCartney’s family-circle matters fast rekindled memories of his extensive global travels. He had taken myriad work trips to India and he recalls seeing “pickers” whose job it is to go to landfills and pick out various items, including plastic.

“They were taking these plastic items from the landfill, putting it into their potholes, pouring diesel all over it, lighting it and then everything would melt down to form a seal in the hole,” says McCartney, who, amazingly, was cuffed by police in the process. “I ended up taking my own household waste, put it into potholes in my local municipality, poured diesel all over it, lit it on fire and everything melted down to form a seal.  And I was arrested for it,” he laughs.

Despite the bust, McCartney’s mind was unshackled on the possibilities that lay ahead. With no professional backdrop in either construction or recycling, he brought in friends Nick Burnett, who was working in council waste management, and Gordon Reid, a civil engineer with a construction business (hence, “MacRebur”) to assist with an at-home dabbling project to create a new polymer recipe for roads.

The research went on for three years. “And 844 tests later I couldn’t find the answer,” McCartney says.  “So, I sent some of these tests to a lab, and asked them to work out for me how we could do it.  And it was that 845th test result I got back which was a success. That was our first product.”

In 2016, the formation of MacRebur was knighted. “We entered a business competition held by Sir Richard Branson, called the Virgin VOOM, and in 2016, we won it.  And that literally took us from being an idea and working on some private drives into a fully-fledged, global business.”

Backed by a rush of new interest, MacRebur moved ahead in fifth gear. Four years later, the company’s mission is both succinct and impactful: Taking waste plastics destined for landfill or for incineration, and using them in a replacement recipe for oil-based bitumen, which traditionally goes into an asphalt road mix.

“Our business is based around solving two world problems: We call it the plastic epidemic on one side – challenges faced with what to do with waste plastics,” McCartney says.  “And then on the other side, it’s addressing the poor road qualities we see the world over, with cracking, rutting and potholes.”

Test controls on same stretches of road, contrasting the MacRebur product with traditional road product, are proving that MacRebur roads are lasting longer and are proving stronger, with polymers adding not just strength, but also flexibility. When adding a polymer, there’s less likelihood of deforming that road while increasing resistance to fatigue, according to experts. They also point out that MacRebur roads last longer and require less maintenance.

Today, MacRebur products are now being used on every continent — in both extreme heat and cold – seen far and wide as Australia and New Zealand to Saudi Arabia, Bahrain and Eastern Europe (Slovakia and Hungary).  Domestically, MacRebur brand listening plants for regional U.S. road projects can be found in both Southern and Northern California (San Francisco), with factories soon to be installed in Arizona and Colorado.

The company’s first domestic road dates to 2017 in San Diego. “That road is the main route leading into the UC San Diego campus; there’s now a sign there saying that, ‘This road was made with waste plastics,'” McCartney says. San Diego is also the site of a MacRebur domestic manufacturing plant, which debuted in December of 2019.

McCartney delves deeper into a study of recycling: his research is resulting in a learned belief that a mere 2% of what people are placing in recycling bins is actually being recycled. “The rest of that plastic is then destined for landfill or incineration, with massive costs placed on municipalities – and, most importantly, taxpayers — and much of it shipped abroad to places such as Malaysia,” he says.  “It’s the stuff that nobody else can use – which we can.”

McCartney continues to put his métier to microphone with public speaking appearances that include a series of “Ted Talks.”  In preparation for an upcoming Talk in the States, viewers learn the impact of McCartney’s new recycling research. “I’ve placed small GPS trackers into plastic bottles that have gone into recycling bins, and I’ve done this in both the States and in the U.K.; and these trackers communicate with me twice daily,” he says.  “Of the 20 trackers I’ve put into bottles on the West Coast of the U.S., not one, so far, has ended up at a recycling center.  Seven of the 20 have been shipped abroad, and, at this point, the rest are all sitting in landfill sites.”

McCartney never set out to create a road company, yet he quick to point out, “We’re an environmental company that has created a new style of recycling and it’s a viable way to help get rid of the world’s plastic problem.”