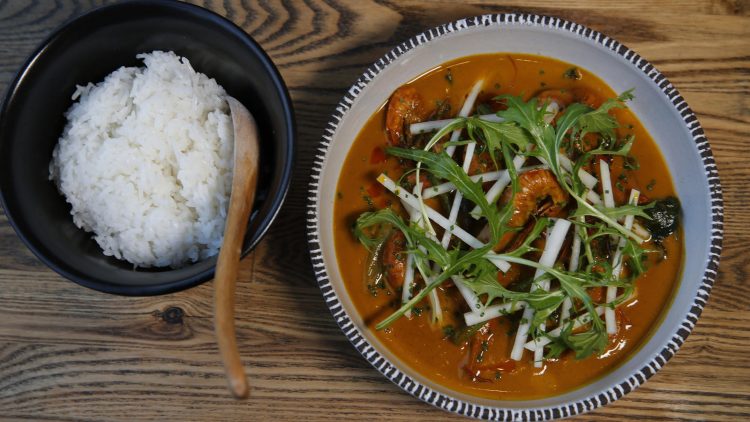 When you hit Irenia at the right time in the afternoon, maybe late on a Saturday when the lunch rush has faded away, you may run into a couple of old guys who look as if they’ve never left their table in the bar, nursing bottles of San Miguel and idly crunching their way through a bowl of dilis, tiny dried anchovies, toasty and warm from the pan. Sometimes they’ll dip the fish in a bit of chile-infused vinegar; sometimes they’ll pop them into their mouths unadorned.

The protocol apparently is to eat the anchovies one by one instead of tossing them back like popcorn, so that each individual fish can be savored on its own — one particularly salty, the next crunchy, the third fragile as glass. It is a way of celebrating the anchovies as once-living creatures, each with characteristics and a tiny soul of its own. 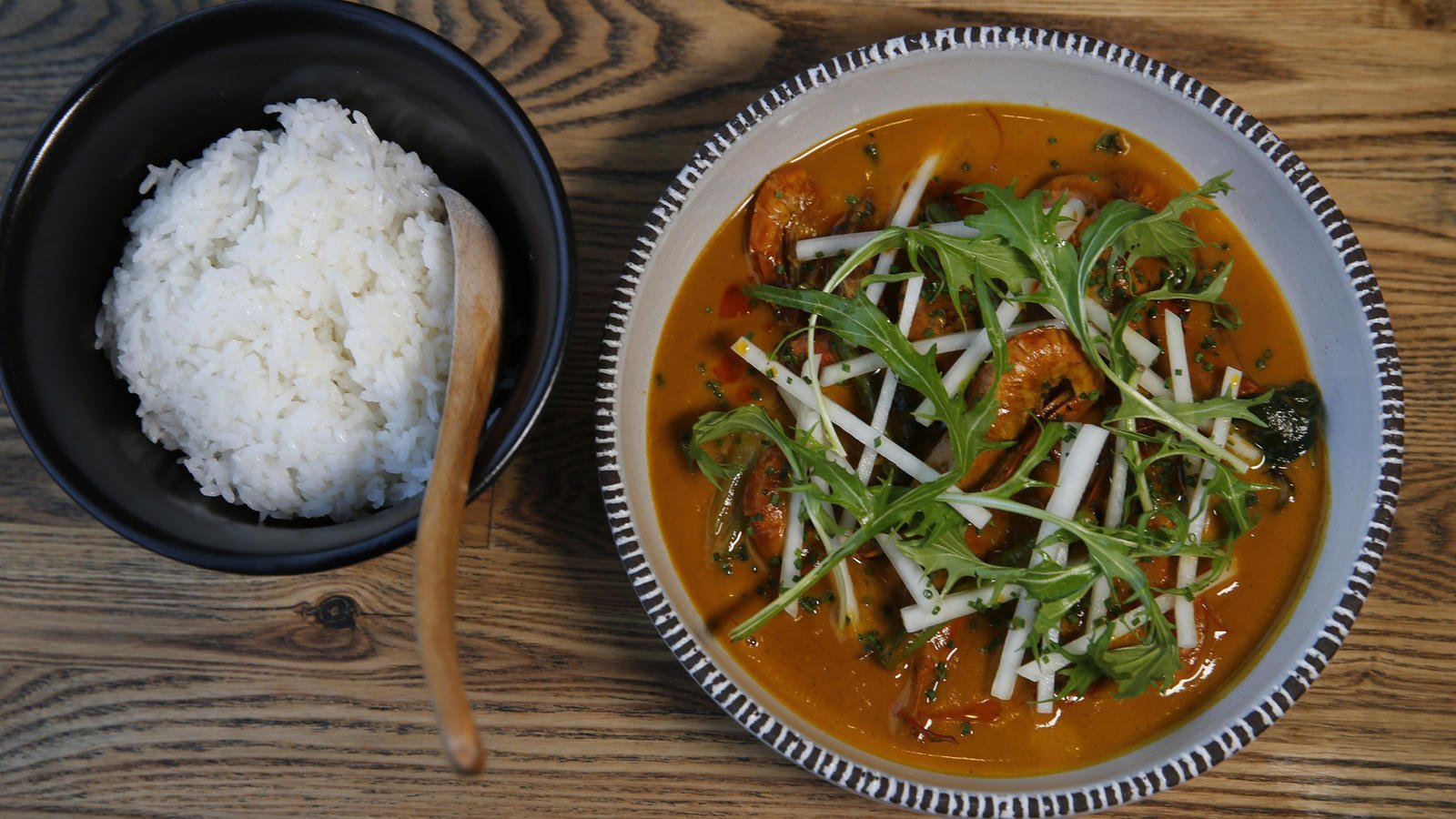 Dilis is a powerful food, both metaphorically and in its unmistakable pungency, which can water your eyes from across the room. It is by no means a rarity —  dilis is among the most common Filipino snacks — but it takes on a special resonance in this Santa Ana dining room, even when you give up and dump them all onto a bowl of rice. Irenia is a modern restaurant, part of the new Filipino food movement flashing through Southern California, but I suspect that the kitchen cares as much about feeding the appetites of its grandmothers and uncles as it does about making the scene. It is not an accident that Irenia is named for the chef’s grandmother.

Downtown Santa Ana has become one of the most unlikely culinary neighborhoods in the state, dotted with cocktail bars, tapas joints and the sprawling 4th Street Market, which includes spaces for food-business start-ups; Electric City, a butcher shop that draws some of its customers from 50 miles away; and Alta Baja, a store devoted to artisanal Mexican foods. Playground is a mainstay of The Times’ 101 Best Restaurants list. You are rarely more than a few steps away from a taco, a quinceañera dress or shade-grown coffee.

Irenia, tucked next to a Starbucks, is the project of Ryan Garlitos, a young chef who first made his name working alongside Carlos Salgado at the wonderful Taco María. It is Garlitos’ aim, one suspects, to do for Filipino cooking what Salgado did for Mexican food, to take apart the iconic dishes of his childhood, reconstruct them with farmers’ market ingredients and Western technique, and serve them within the context of a New American meal. His food isn’t influenced by the Filipino palate — it is Filipino, reinterpreted and presented in a new way. In this, Garlitos shares the vision of Lasa’s Chad Valencia and Rice Bar’s Charles Olalia. If your knowledge of Filipino cooking comes from only church-carnival adobo and cheap steam-table joints, Irenia will change the way you look at the cuisine.

So sinigang, the tamarind-soured broth usually used to moisten great handfuls of rice, becomes denser and milkier when Garlitos makes it, more about the broth and the seared cubes of daikon in it than about the jolt of pure acidity. Ginataan tends to be a thick coconut-milk stew; Garlitos uses it to accent a dish of romanesco. His pancit, chewy house-made noodles garnished with citrus and snips of fried chicken skin, is served like a plate of Italian pasta, but its sour-savory flavor is straight out of Manila.

Kare kare, oxtail stewed with peanuts, is made with charred bits of cauliflower instead of the meat; broccolini is served with a squirt of puréed egg yolk, a dribble of caramel enhanced with toasted shrimp paste and a sprinkling of shaved dried bonito; and you’re probably going to swish bits of the big, deep-fried turkey leg through a sweetish chicken-liver sauce that tastes a little like Filipino-style giblet gravy. 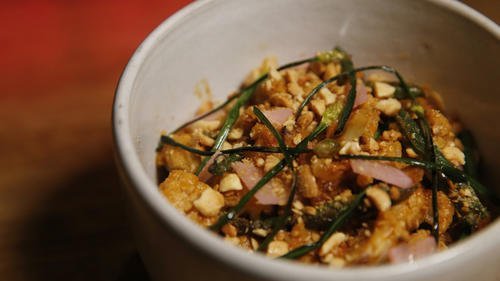 You are never far from a drop of the fish sauce patis, a smear of the fermented shrimp paste bagoong, or a squirt of calamansi lime, but there is an almost unexpected suavity here, even when charred heads of little gem lettuce are smeared with a paste made with bangus, Filipino milkfish, sweet segments of Cara Cara orange and what looks like a streusel but tastes like pure anchovy.

Dinuguan, a stew of pig innards in a super-pungent sauce made with pork blood and ground liver, is usually one of the most fearsome dishes in the Filipino arsenal, but Garlitos lightens the cocoa-dark sauce — the liver becomes no more than a fleeting hint of bitterness — and replaces the intestines and such with crisp-edged slices of roast pork shoulder. It was the most popular dish at the table.

Are the main dishes more conventional? The main dishes are always more conventional: braised beef shank with charred shishito peppers; crisp-skinned chicken thighs in a gingery sauce; or ridgeback prawns in a coconut-milk sauce that tastes almost Thai. (It is nearly impossible to pry the little prawns out of their shells — I tend to regard them as I do the shrimp in a gumbo, there more for flavor than for actual sustenance.) You would expect an adobo at a Filipino restaurant, and there it is —sweet, soft pork belly braised with soy, vinegar and lots of garlic, served over what in an Indian restaurant you would call a mung bean daal.

For coffee, you’re going to have to go to nearby Portola or Hopper & Burr. But you are going to want at least a slice of Irenia’s lovely ube brown sugar pie, which tastes a little like a Southern chess pie after a long Filipino vacation. And while you’re at it, you may as well get the bouncy rice cake called bibingka, sweetened with coconut and sprinkled with deeply roasted peanuts. The coffee shops are a couple of blocks away. You need to sustain yourself for the stroll.