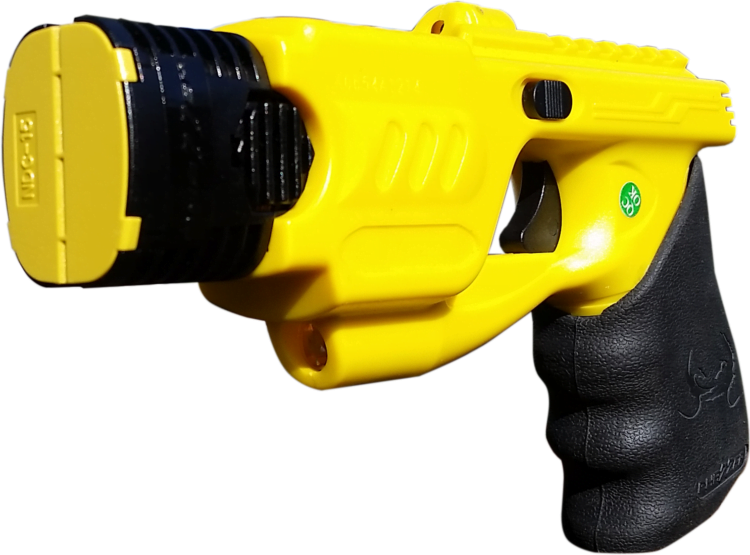 The company’s flagship CEW, the PhaZZer® Enforcer™, is on the fact track to become the stun gun of choice for law enforcement agencies across the country, including police departments in California.

When stun guns were initially introduced back in the 1960’s, law enforcement agencies outside the U.S. were the first to embrace the new technology as a weapon designed to subdue assailants without causing serious bodily injury or fatalities. Conducted Energy Weapons (CEW’s) began to make their way into the U.S. in the 1970’s as an alternative to deadly force when police departments, department of corrections prison facilities and security guards nationwide began to adopt the technology.

Headquartered in Sheridan, Wyoming, PhaZZer® LLC designs, develops, manufactures, and distributes conducted energy weapons and accessories under the PhaZZer® brand. The company’s flagship CEW, the PhaZZer® Enforcer™ is on the fast track to becoming the stun gun of choice for law enforcement agencies across the country, including police departments in California.

The recent successes for PhaZZer® can be attributed directly to the new safety concerns and budgetary realities facing law enforcement. While the PhaZZer® products have zero fatalities in the nearly decade since their market introduction, a chief competitor to PhaZZer® continues to receive headlines for deaths resulting from its use.

To date, municipalities have had to pay over $186 million in wrongful death settlements stemming from the nearly 1,100 stun gun fatalities. This single statistic has law enforcement looking closely at PhaZZer® for its patented advanced safety technology.

“Defund the Police programs are resulting in decreased budgets for police departments and increased response time to serious emergencies for the public,” says Steven Abboud, CEM of PhaZZer US. “Our nation’s police have an awesome responsibility to protect and serve. In addition to meeting their daily life-risking challenges, today’s law enforcement professionals face less than reliable equipment that impacts their ability to protect — and decreasing budgets that minimizes their ability to serve.

The PhaZZer® Enforcer lives up to its name, giving officers a defensive weapon they can rely upon for its unmatched safety record and police departments a weapon that meets their challenging budgetary limitations.

In the market for nearly a decade, the PhaZZer® Brand has zero fatalities associated with the Enforcer CEW, a fact that can be credited directly to its Safety Shut Down Circuit Technology™ specially designed to prevent over-exposure of the electrical charge, a leading contributor behind Taser fatalities. Patented by PhaZZer®, this game-changing technology deactivates the weapon system after three consecutive five-second discharges. This “15 second” rule, recommended by the AAEM, AHA, and DOJ, shuts down the circuit and brings a mental awareness to the operator that the weapon has reached the maximum exposure in a 24-hour period as recommended by the American Academy of Emergency Medicine AAEM.

In addition to the adoption of the PhaZZer® Enforcer™ by the officer on the beat, PhaZZer® is also experiencing an increase in demand among Departments of Corrections for its newest addition, the PhaZZer® Force™, another in the company’s product line that is designed especially to meet requirements unique to detention facilities and prison guards.

Key among the appeal of the PhaZZer® Force™ to the justice system is the addition of a 4 ½ foot retractable circuit disconnect ripcord that deactivates the weapon in the event that the user loses control of it.

Following in the wake of the Defund the Police programs, slower police response times and public concerns over Washington’s threats toward the second amendment, PhaZZer® has entered the consumer market with a professional grade Conducted Energy Weapons (CEW) specially designed to meet the growing demand for civilian self-defense. The PhaZZer® civilian stun devices are also professional grade weapons and provide an effective defense solution for women and men should they find themselves or their families in a threatening situation.

“As it becomes increasingly evident that the public requires and deserves a less-lethal option for self-protection, consumers are reassured that the same PhaZZer® stun guns tried and tested by law enforcement are now available to them, together with a training certification program to ensure their PhaZZer® is used responsibly and effectively,” Abboud says.

Built to serve as non-lethal alternatives to traditional firearms, PhaZZer® dart-firing stun guns do not require a Federal Firearm License (FFL) and are classified as a non-firearm by the ATF as they are Nitrogen-propelled and not propelled by a pyrotechnic. At the same time, use permits in most jurisdictions are not required either; however, consumers are encouraged to check with their local ordinance.

“With crime rates on the rise, nearly doubled in some cities across America, there is a greater likelihood of an individual falling victim to a crime,” Abboud concludes. “This coupled with the continued defunding of our Nations Law Enforcement Agencies, causing a shortage of Officers, decreased budgets and increased response times, is fueling the need for civilians to be able to protect themselves.”