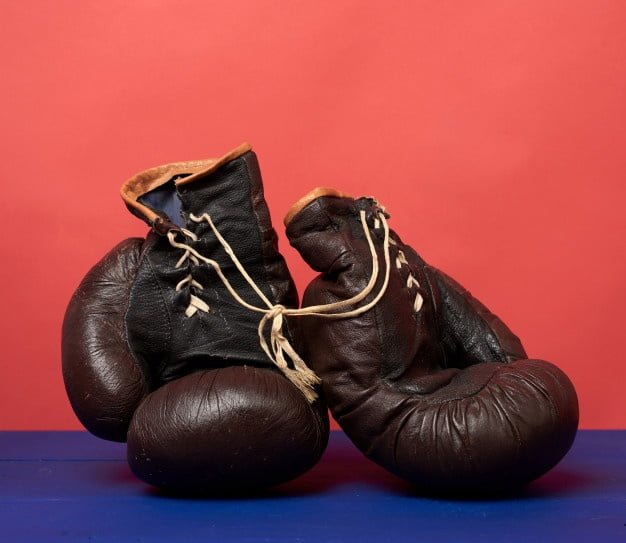 Zach Hirsch begins another training session at his South Florida home with Cory Spinks, a two Division and five-time world boxing champion. Spinks, who beat Zab Judah, is the son of Leon Spinks, famous for his gap-toothed grin and his stunning victory over Muhammed Ali for the heavyweight championship in 1978. He is also teaching Hirsch, an 18-year-old Instagram influencer, the intricacies of the sport he loves, up close and personal.

The immersion includes sparring twice a week with Spinks or BJ Flores, who amassed a 34-4-1 record as a professional boxer, including three major world title challenges. Flores has diversified his game since then, serving as a color commentator for The Impact Network and trainer for YouTube social media sensation Jake Paul, who gained an even bigger audience when he knocked out former NBA guard Nate Robinson as part of a late November celebrity pay-per-view exhibition featuring former champions Mike Tyson and Roy Jones Jr., who fought to a draw.

Hirsch scored insightful interviews with Tyson and Jones, and plenty more social media followers after a sit down with 25-year-old internet star and Jake’s older brother, Logan Paul, who signed on to a celebrity pay-per-view exhibition match against 43-year-old Floyd Mayweather Jr., once considered by many boxing analysts the best pound-for-pound fighter in the world.

Jake has 14.4 million Instagram followers, while his brother Logan counts 18.8 million, substantial figures that has catapulted them into the center of the ring of boxing, despite never throwing a punch as professionals.

Tyson, no stranger to side show stunts and uncensored takes, credits the brothers, who have more than 42 million YouTube subscribers combined, and other fellow YouTubers for helping to revitalize the sport.

Add an assist from Hirsch, who’s better known as Mystic Zach to his growing legion of 357,000 Instagram followers who track his interviews, boxing and mixed-martial arts predictions, and sports wager prognostications.

Hirsh, who started picking sports winners at age 10, has a knack for playing the odds. Last year, he correctly picked over 90% of football, basketball and combat sports wagers, buoyed by a run of 21 straight college football winners, including the SEC Championship, the College Semi-Finals and the National Championship Game.

The record helped him secure a gig as the official on-air handicapper for Bare Knuckle Championship, which bills itself as the fastest growing combat sport in the world.

“I’ve been around it my whole life,” says Zach, whose boxing acumen, friendly on-camera demeanor and insightful social media posts won over Steve Marcano, whose production company partnered with The Impact Network to broadcast the championship boxing series.

“Zach personifies the future of what all entertainment is becoming: live events, tied to social media,” Marcano says. “It also helps that he has nearly half a million followers on Instagram.”

The five-year deal between Impact Network and Steven Marcano Holdings Group LLC calls for 36 televised events in 2021, a busy schedule that Hirsch is embracing as he balances work and school.

“The more fights you do the more people will be interested,” says Hirsch, who provides analysis and boxer interviews before and after each match. “It’s a great opportunity for me to get more experience in the field of commentating and maybe eventually get on some huge network.”

The freshman with an academic scholarship at Lynn University in Boca Raton attends classes Monday through Thursday. He flies to Los Angeles on Friday, does the show on Saturday, and is back home on Sunday in time to watch NFL games in the afternoon.

“To me, it’s not really work,” he says. “I had a great debut and I’m looking forward to doing more.” 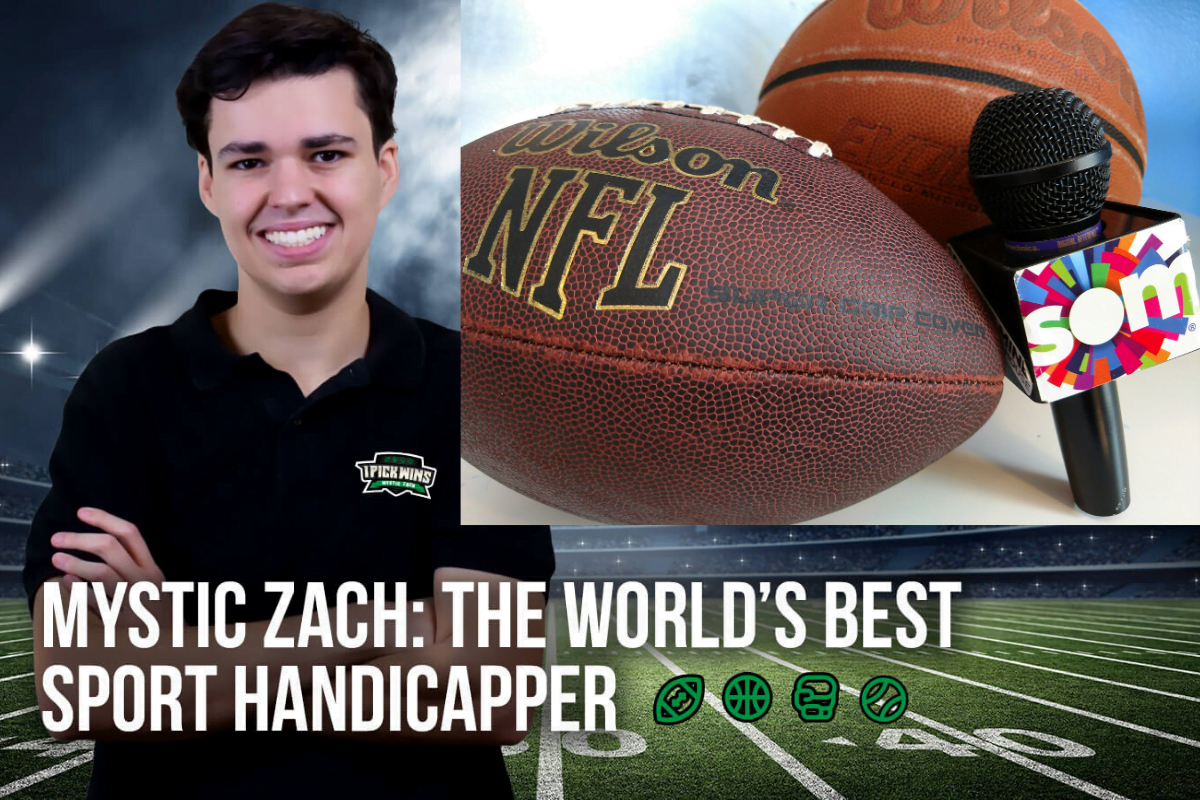 The Impact Network, which is the largest black-owned, faith-based network airing content in over 93 million homes through major cable and satellite providers, wanted a commentator who could connect on camera with fighters and a growing, younger audience. Hirsch, a Gen Zer, plans to launch a daily fantasy sports site among other brand monetization efforts, hitting the parlay on both fronts.

Until then, he’s back in the ring training and working on his inside game, skills he can take to the booth.

“I realized how much I can learn and adapt as a boxing commentator,” says Hirsch, who hasn’t ruled out an influencer bout of his own. “I’m really taking this boxing stuff seriously and if an opportunity comes up, I’d love to do an influencer match.” 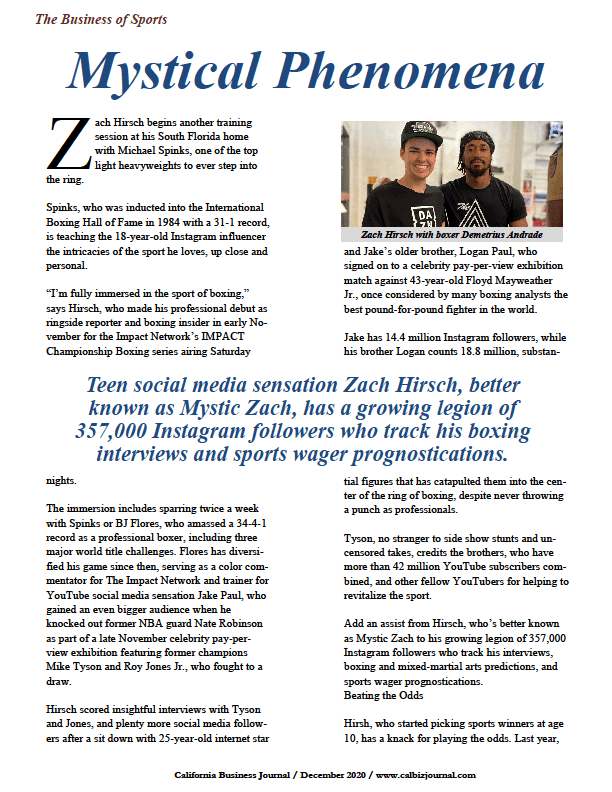 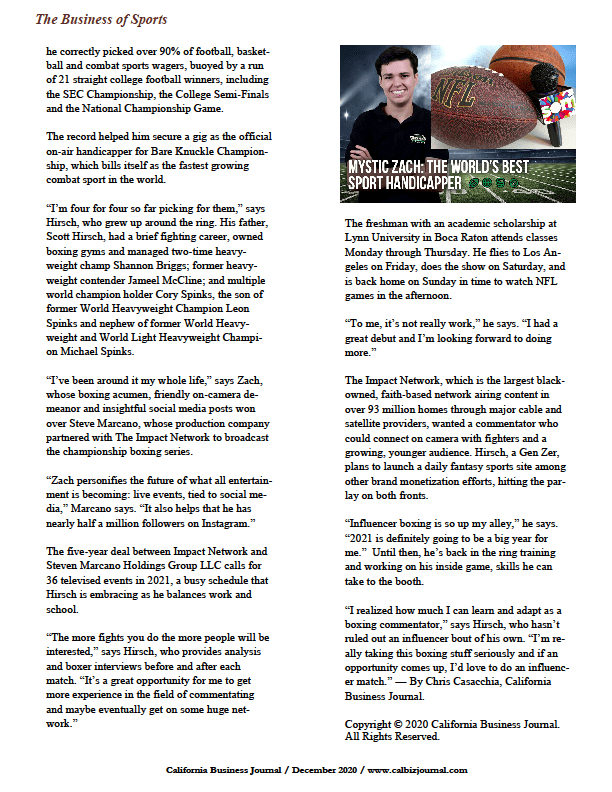