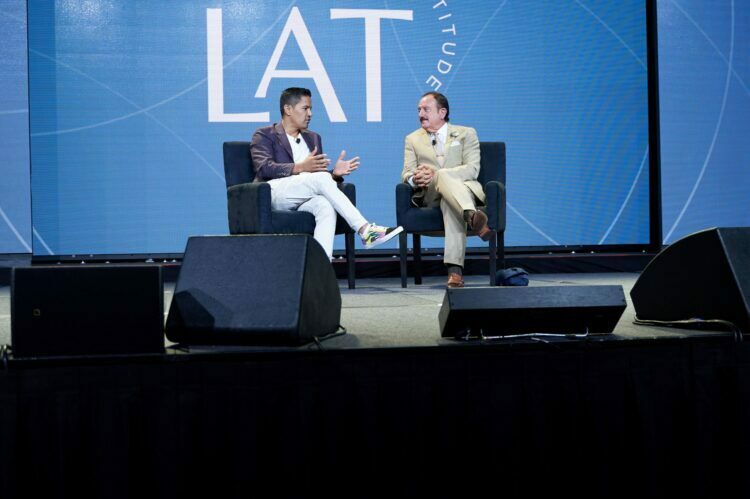 Latino entrepreneurs, consumers and workers are among "the patriots" battling the Covid war.

The dream of explosive economic growth is alive in the minds of Sol Trujillo and Gary Acosta, co-founders of  L’ATTITUDE, which, despite the complications presented by Covid-19, will meet virtually this week, September 24-27, to explore the ways that Latinos are driving the “New Mainstream Economy.”

The New Mainstream Economy is Trujillo’s way of describing how Latino entrepreneurs, consumers and workers — what he calls the Latino cohort — are driving growth in the U.S. economy.

“Latinos are the healthcare workers, they’re the ones preparing our food, growing our food, picking our food. That’s not to say that that’s all Latinos do, but there’s a huge proportion, probably over 30 percent in every sector that is carrying the load. They’re the patriots battling the war here.” — Sol Trujillo

Latinos will  continue to play a major role in restarting the economy after it crashed at the beginning of this year, says Trujillo, who has served as CEO of various companies, including US West, Orange S.A. and Telestra. “This cohort is so resilient, they took us out of the last financial crisis, and I can tell you, given the youthfulness, given the entrepreneurship, and given their other characteristics, that it will continue in a big way.”

Congressional leaders, entertainers and C-suite executives will attend the conference to discuss ways they can invest in Latino businesses, which were largely left out of government programs such as PPP.

“With racial injustice top-of-mind in America, it is important to be aware of the more subtle ways it plays out for U.S. Latinos,” says Acosta, CEO of the National Association of Hispanic Real Estate Professionals (NAHREP). “Not only did Latino small business owners not get equal access to government pandemic support programs, but Latinos have for also decades found it difficult, if not impossible, to access credit. In spite of these troubling trends, they have still been the driving force behind over 80 percent of the net new businesses in the past decade.”

The Latino Donor Collaborative that Trujillo runs will release a new study on U.S. Latino GDP this week. Likewise Acosta will release a similar study on Latino homeownership.

In addition to discussing the benefits of investing Latino businesses, this year’s  interactive, four-day event will include a critical discussion about making capitalism work for the many as opposed to the few.

Executives such as Bank of America CEO Bryan Moynihan and Blackrock CEO Larry Fink will discuss transitioning away from the current conception of capitalism that has concentrated 79 percent of the nation’s wealth in the hands of just 5 percent of the population.

What new conception of capitalism they have in mind is still unclear, as Trujillo and Acosta discourage government intervention in favor of the market solutions that many argue is what allowed wealth to concentrate at the top in the first place.

One benefit of the Latino cohort that Trujillo and Acosta choose to highlight is its youth. By all accounts, young people in the United States are more skeptical of capitalism now than they were a decade ago, and much more open to the possibilities of socialism than their parents and grandparents.

According to a Gallup poll, less than half of Americans ages 18-29 have a positive view of capitalism, while more than half have a positive view of socialism. Nevertheless, Trujillo and Acosta believe that the best solutions to the problems besetting the working people of America are market solutions — specifically an influx of capital towards the segments of the economy that are growing, namely the Latino cohort.

“The simple thought is that the U.S. Latino segment currently is slightly under 60 million people that within the next 25 years will grow to 100 million people, and probably at that point in time, one in every four Americans will be Latinos. Right now, with the average incomes there is a barbell effect where there are many people at the very low income range who are earning minimum wages, not even livable wages, and then there’s an emerging division of entrepreneurs and people that are much more educated than their parents were, and they’re playing in the system very effectively and growing incomes rapidly,” Trujillo says.

The way that Acosta sees it,  L’ATTITUDE  is as much about informing people about the benefits of investing in the Latino cohort as it is about introducing them to it.

“There is a knowledge gap,” Acosta says. “There is systemic racism, but it doesn’t necessarily mean that people have a nefarious behavior mechanism. People tend to do business with people that they know, tend to do business with people who look like them, talk like them, have similar backgrounds and experiences, and those scenarios have created gaps in our economy, and have made it tougher for certain segments of our population to access these things over time. So there has to be a more intentional effort to reach these markets.”

The list of C-Suite attendees confirmed to participate in L’ATTITUDE 2020 include:

(Featured photo: Sol Trujillo and actor Jay Hernandez of Magnum PI discuss the Latino impact on the U.S. economy at the L’ATTITUDE conference.)

L’ATTITUDE 2021: The Spotlight Is On The New Mainstream Of America