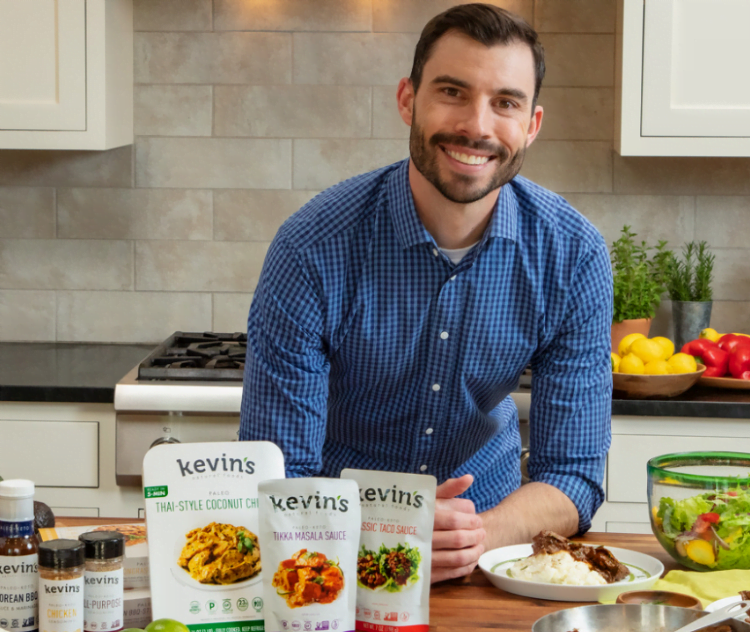 Delicious, diet-friendly -- and especially affordable -- you don’t have to be with the paleo crowd to relish Kevin’s Natural Foods.

Kevin McCray became violently sick in his 20s. A devastating auto-immune disorder sapped his energy and repeatedly sent him to the hospital until he discovered the one thing helped him feel better: food. Specifically, certain foods: a diet rich in whole foods and free of refined sugar. He learned to prepare meals with a smattering of ingredients that didn’t cause inflammation or a relapse of his condition.

He knew others were struggling with the same condition too. He would later hear in focus groups that nearly every person wants to eat healthy, so what was stopping them? In most cases, they feel that they don’t have the time to prepare a healthy meal — and McCray sympathized.

“Nothing was out there to help me with dinner,” he recalls. But thanks to his idea for a healthy, restaurant-quality, pre-cooked, pre-packaged, diet-certified line of entrees that people could easily find and prepare in under five minutes, there is now.

McCray teamed up with serial entrepreneur and master chef Dan Costa in 2018 to create delectable dishes that met the strict dietary restrictions that he used — and continues to use — for his own health.

His team spent eight months focusing on the flavor and quality of the proposed product line, along with perfecting the sous-vide method of cooking the meats “slow and low.”

The Kevin’s Natural Foods internal team motto: no bad bites, meaning they ensure each piece of meat has been thoroughly trimmed of cartilage or fatty chunks.

McCray and Costa also tackled sauces, which are critical for flavor in most dishes. Most companies rely on heaps of salt and sugar, but Kevin’s was determined to make their dishes flavorful without refined sugar and excess sodium. The goal was to make a variety of authentic-tasting sauces that were so good, a customer couldn’t tell the difference between McCray’s and one made with traditional ingredients.

McCray hosted dozens of focus groups, discussed every angle of the product, debated how they shop and cook at home, and ultimately, taste-test the entrees.

“It was by far the most fun part of starting the business,” he recalls.

The first indicator that McCray had a winner on his hands was at the launch. When the recipes were locked in and the production facilities were ready, McCray and his team prepared for their first unveiling at handful of Bay Area Costco locations. The initial order sold three times what was forecasted.

“We pulled all of our PO’s forward to fill the orders,” he says.

By February 2020, Kevin’s Natural Foods was on the shelves at a slew of Costco’s and 1,200 Publix (a southeastern chain) and Whole Foods. McCray added non-perishable items to the lineup, like keto and paleo simmer sauces and seasonings that can be found on Amazon today. 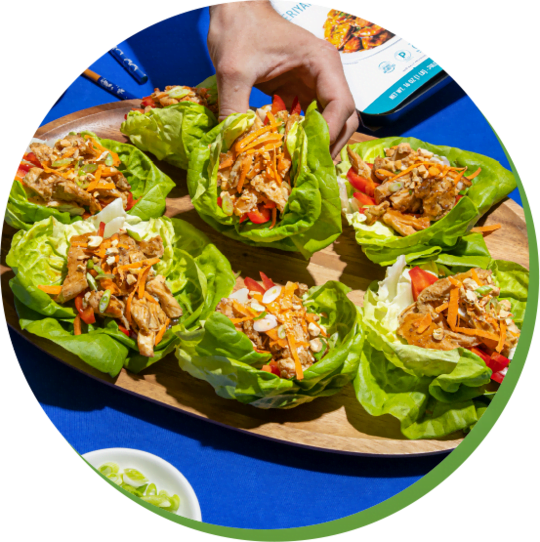 Then the pandemic struck business with grocery stores instantly changed.

Demand initially jumped at existing stores, as grocery stores were among the only places to shop in March through May, but stores that were going to add their line had to postpone so they could focus on existing items.

In June 2020, stores found their footing and moved forward with planned item swaps. Kevin’s went onto shelves at Ralph’s, Sprouts and Safeway. Today, it is steadily adding 1,000 stores a month and recently expanded its menu to include healthy sides like riced cauliflower.

Kevin’s also added 200 new jobs to keep up with demand.

In grocery stores, shoppers will find Kevin’s Natural Foods in a convenient, if unusual place: the pre-made meal section of a store’s meat department. It’s here that McCray realized the power of packaging. His clean, simple, and bright white packaging stands out in the colorful mess of packaged mashed potatoes and sugar-filled pulled pork.

The simplicity reflects the freshness of the ingredients and the company’s message of clean eating.

“It’s easier to embrace healthy eating when the food is superb, not to mention affordable.” — Kevin McCray

McCray’s team feels strongly about a reasonable price point, especially given its location in the grocery store. Each meat entree serves two adults and costs less than $10.

Since his business was borne from a desire for different flavors and ingredients, a cookbook “is the logical next step.” 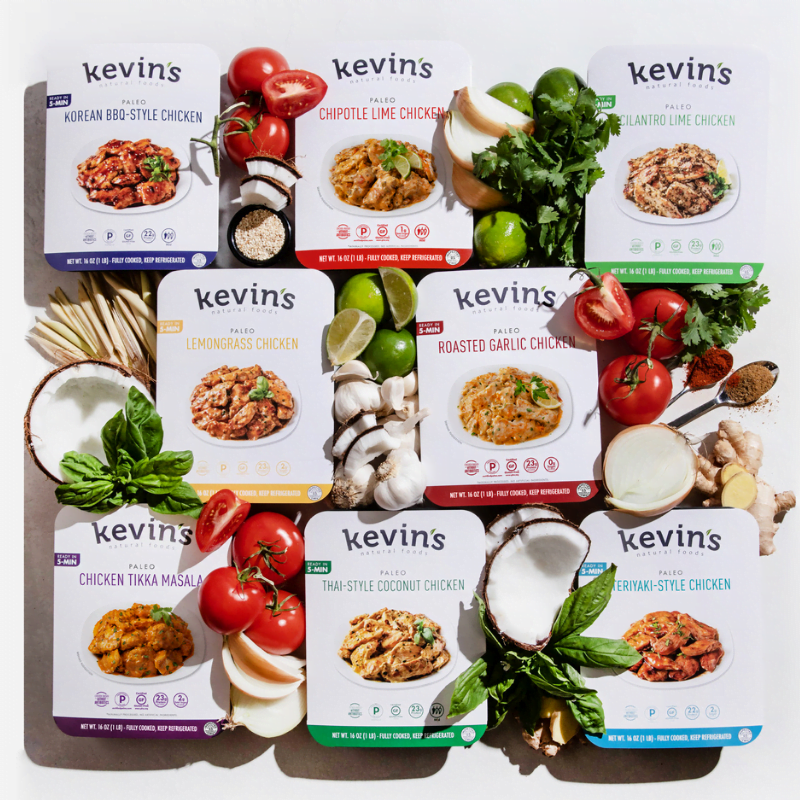 At the same time, McCray acknowledges meal-prep fatigue in the time of coronavirus.

“The novelty of cooking at home has worn off, but more people are trying to eat healthy than ever before.”

He’ll also debut a new Kevin’s-branded searing pan on its website. Designed for the health-conscious home chef, his pan is ideal for searing and contains no harmful chemicals.

“These are products that can truly help people,” he says. “This isn’t just for hard-core dieters, this is for everyday people who want to improve their lives.”

Editor’s Note: From the author, Victoria Kertz. “Kevin’s Natural Foods is refreshingly affordable and can be enjoyed by just about anyone. Wondering what to try first? I tried the Paleo Teriyaki-Style Chicken. The sweet and satisfying zing of the sauce seemed to get better with each bite of sous-vide tender chicken from California farms and I found the serving size to be more than enough for two people. Kevin says the teriyaki dish holds a special place in his heart “because it took so many rounds to get it just right.” 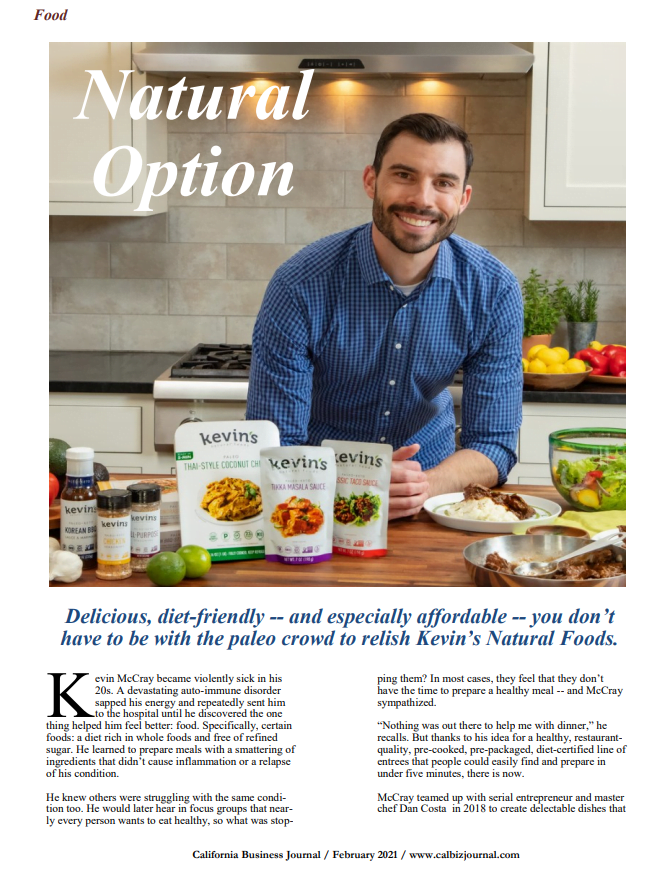 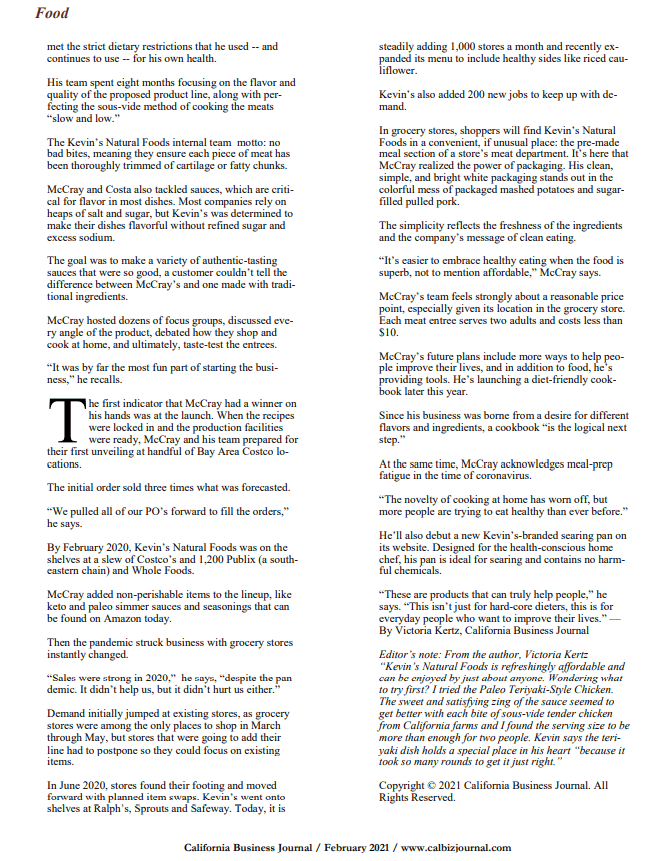