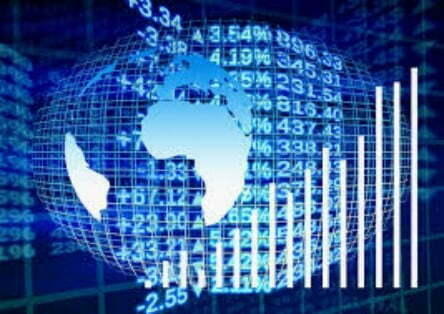 Is Virtual Financial the Future of Financial Services?

While competitors are still teaching and using a system created in the 1950s, Mike Hinsvark and Chris Delfino of Virtual Financial have taken that old model and built a new one that they consider to be “the future.”

Virtual Financial Founders Mike Hinsvark and Chris Delfino have created an innovative new platform that they say is “the future of the financial services industry — a system that enables average entrepreneurs to establish a business anywhere in the world,” Hinsvark says.

While Virtual Financial’s competitors are still teaching and using a system created in the 1950s, VF has taken that old model and built a new one that leverages the internet and social media for 2020 and beyond. “It is a virtual model that is the only one of its kind. Our model of building an agency is very unique,” Hinsvark says. “By that I don’t mean selling insurance in more than one state from home — other companies teach people how to sell for a living. However, in our company, we teach agents how to build a virtual insurance agency in all 50 states.”

Rather than it just being about sales, Hinsvark and Delfino’s  model focuses on building distribution and growing a nationwide agency.  “We’re able to retain our leaders more effectively than a traditional commission sales income because we teach our agents how to build an agency that can create a passive residual business income,” Hinsvark says. “One of the best parts about this business model is that you can build from the couch in your office or from anywhere where you can connect online.”

That’s because VF has, as Delfino says, “enabled our licensed agents to delegate the sales process to experienced industry professionals. Our virtual model allows us to recruit in a market that wouldn’t normally consider the insurance industry.”

He explains further: “A stay-at-home mom or wounded warrior could get an insurance license and could work from home and delegate the sales part to a financial professional.”

The thought of sales is a hard “no” for many people and would turn most away from entering into the industry of financial services. However, with Virtual Financial, “these individuals now have a chance to make an income without having to specialize in sales,” he adds. Instead, they can work with a financial professional with more experience to help make the sales with referrals.

“It really comes down to a major simplification of roles in the industry, with the one requirement of a license,” Defino says. The necessity of the license weeds out the aspiring home business entrepreneurs who, according to Delfino are “weak and aren’t willing to work hard to play hard.”

Instead, by putting in the work, Hinsvark sees the concept brought to light by Tim Ferriss in his book, The Four-Hour Workweek, which Hinsvark pushes the agents to read.  “An important concept is relative income, since time is the greatest asset,” Hinsvark says. “What matters most is how much you earn per hour instead of just how much you earn per year. Of course, $100,000 per year in San Francisco or Manhattan is not the same as $100,000 per year in a city with a lower cost of living. So we teach people that upon becoming successful, you want to be able to limit the hours you need to work to be successful in your business,” Hinsvark says.

With a focus on “teaching people how to improve their life and how to get more free time,” Virtual Financial trains its agents to how to stay productive even when traveling. This is a concept and model that appeals to the wide majority of people, especially when learning that the financial services industry is nearly twice as big as the retail industry and the real estate industry combined: Financial $109 Trillion; Real Estate $32 Trillion and Retail $24 Trillion.

Hinsvark and Delfino say its model has a strong natural – and monetary — appeal compared to the traditional brick and mortar model. “It’s common sense,” Delfino laughs. “Think about it — do you want to attend meetings? Drive to appointments? Work locally? Or would you rather work from home or anywhere in the world and build residual passive income?”

Both Hinsvark and Delfino are veterans in the financial services industry, each with over 20 years of experience. Hinsvark brings to the table strengths stemming from his previous creation of a traditional agency with offices around the country. Delfino brings knowledge and success from building a branch agency. With those combined strengths, Virtual Financial became part of World Financial Group, a Transamerica Company. Rather than the traditional brick and mortar concept where clients have to come into an office, or where agents have to travel into homes, VF has made the full process virtual.

When done virtually, “a husband and wife can be themselves,” Hinsvark says. Rather than trying to use body language to share their thoughts with the other, they can just mute the phone and discuss. More importantly, no one has to drive anywhere saving precious time and money plus the risks of being on the road today.

“What we’re doing is empowering entrepreneurs to build a business that produces a residual income,”  Hinsvark says. “We see a great future with VF’s business model becoming the new norm. The only question Virtual Financial has about its concept is, “When are we going to take over?” 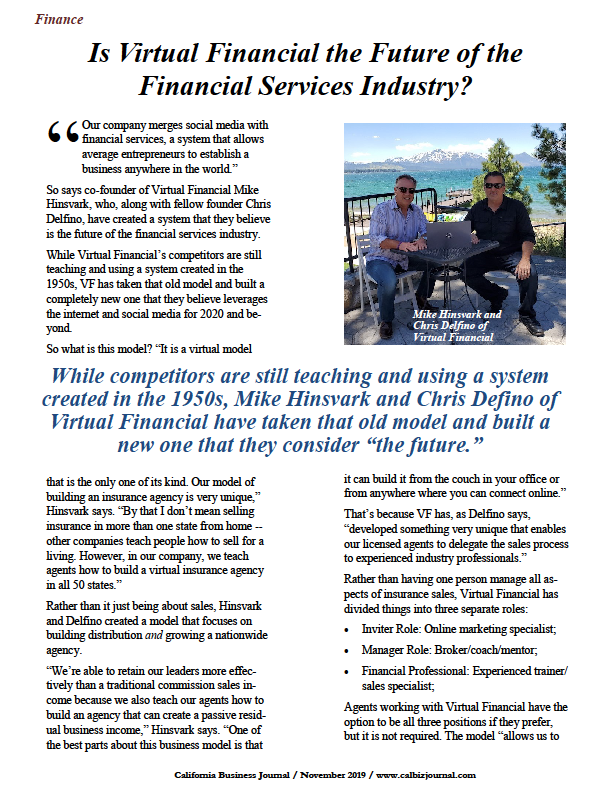 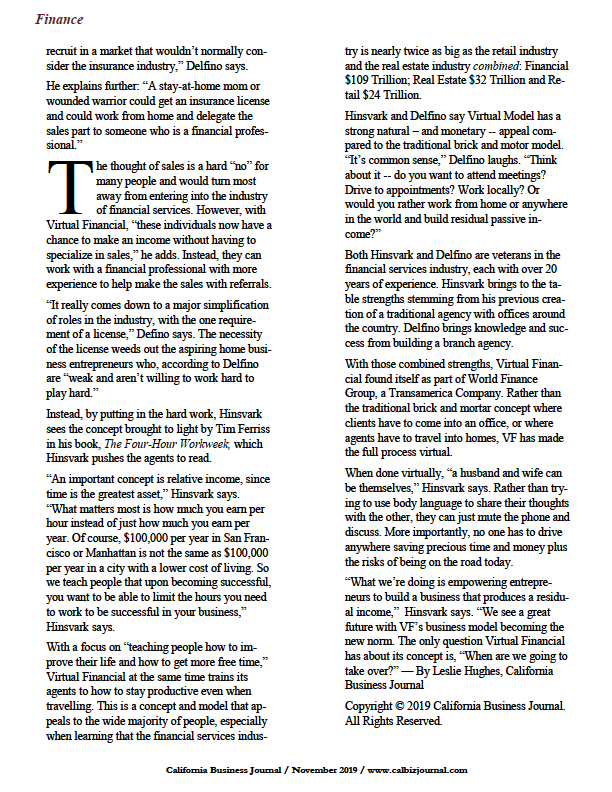