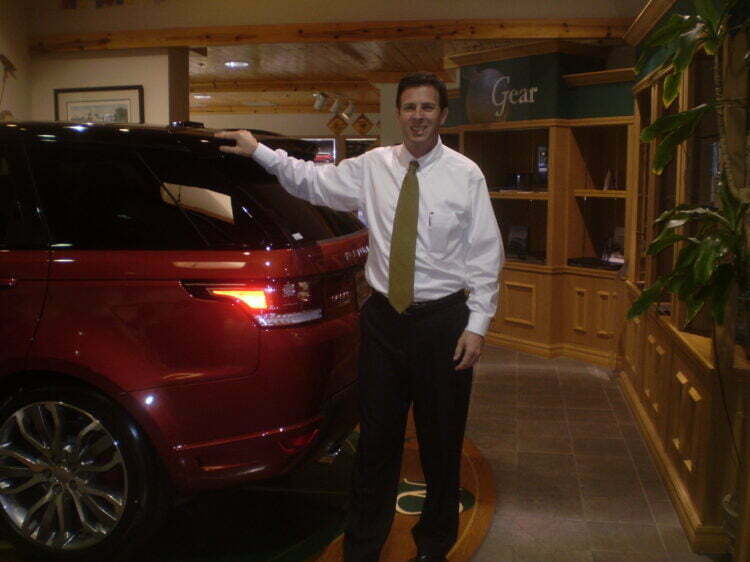 John Totaro calls Land Rover “the hottest car on the planet.” With demand so high, you can blink and the vehicle can be sold right out from under you while you’re thinking about buying it. 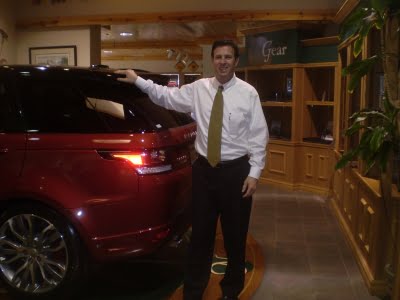 IF YOU ARE LOOKING TO PUT A NEW RANGE ROVER IN YOUR GARAGE THESE DAYS, get in line — yes, that long line that begins around the corner … and bends around the next corner.

Why is there such a demand for Land Rover’s latest version of their flagship Range Rover and Range Rover Sport?

“Because it’s the hottest car on the planet,” says John Totaro of Jaguar Land Rover Anaheim Hills, one of the top dealers in Land Rover sales in the Southwest.

There is six-month backlog on Range Rovers, which is such a sizzling brand these days that it has completely changed the dynamics, philosophy, approach and strategies for Jaguar Land Rover Anaheim Hills and its sales team.

“It’s much different compared to when I first started with Land Rover 10 years ago,” says Totaro, a genuine aficionado and historian of the iconic British vehicle.  “Years ago, it was a somewhat lengthy and enjoyable process because you were able to spend time with your customer going over all the car’s features, its history and the remarkable capabilities of the vehicle.

“By spending time with the customer, you get to know them, find out their needs and why they were interested in Land Rover versus other brands.”

“It’s a huge challenge today because even though you want to take quality time with customers – take time to enjoy the experience — you really can’t because the vehicles are selling so quickly,” he says. “They’re selling before you even have time to drive down to the dealer. It’s crazy. I’ve had people call me to tell me they’re coming down and when they get here 20 minutes later, the car is already gone — sold right out from underneath them.”

Totaro was recently working with a customer when another sales person came over to get the keys to a new black Range Rover Sport to show someone else. About 20 minutes later, to Totaro’s astonishment, he saw his colleague’s customer drive off the lot – in the same Land Rover he was showcasing.

“My jaw was hurting because it hit the ground so hard,” he says with a laugh. “These days, you just blink and the car is gone.”

That puts a little pressure on the client – and the sales person.

“Same thing when purchasing a Land Rover. You want to enjoy the experience. It’s that much of a special vehicle. But it’s difficult now because of the rate of speed these cars are selling – which is rocket speed.” 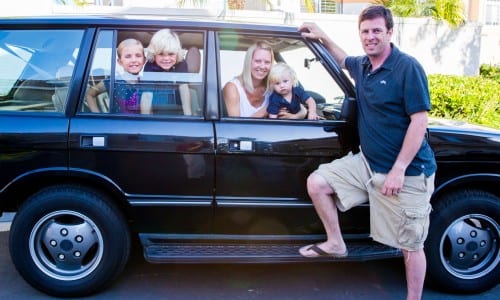 This new “sense of urgency” has changed Totaro’s perspective, scope and sales approach. And that’s a problem for him because of his friendly, talkative nature.

“I’ve gotten chastised before for being such a story teller,” he says with a laugh. “My dad was that way. I got the gift of gab from him.”

Yet his gift of conversation is attractive to Land Rover buyers. Take Ivan Anderson. To this day, he vividly remembers meeting Totaro at the Land Rover dealership.

“He struck me as someone really different,” says Anderson, the President of Anderson Productions, an Entertainment Production Company in Southern California.

“He’s not your typical sales person. He has an air of confidence about him that my wife, Kristiana, and I really liked and appreciated. He carried himself is such a way that you wanted to work with him.”

Anderson and his wife were completely ‘wowed’ by Totaro’s knowledge and passion for Land Rover.

“I never met anyone who had such knowledge and passion for a car,” he says.

Sven Larson, the General Manager of Jaguar Land Rover Anaheim Hills, can’t be any happier that someone like Totaro is on his team.

“It’s true. John is not your typical sales person. And we like that,” Larson says. “We like career Jaguar Land Rover advocates. That’s John. He’s a people person – he likes to interact with people. And his enthusiasm for the product is genuine and very contagious.”

Larson also likes the fact that Totaro “is not the typical ‘car guy’ who is just passing through to get to the next dealership,” Larson says. “This is his career. He is a career Land Rover guy.”

Growing up in Lake Tahoe, Totaro had dreams of becoming a fireman.  At the age of 18, while waiting to hear if he made the cut, he landed a job at American Airlines in ramp operations.

He thought it would be a short-lived position. But as he sat on the long list of people hoping to become fire fighters, he became entrenched with the airline. He remained there for 20 years.

“After 9/11, the business changed quite a bit – for the worse,” Totaro says. “There were huge staff cuts. A handful of us in management who were lucky to keep our jobs were suddenly doing the work of two or three people.”

That took a toll on Totaro – particularly his back. He suffered two torn herniated discs. He took a leave of absence and averted surgery, barely.

As a result, he didn’t plan to return to the airlines.

“I had already been through two strikes, major layoffs, and I felt enough was enough,” he says.

“Plus, I didn’t want to be that guy you saw hobbling down the road with a cane.”

Especially a family guy like Totaro, who with his wife Deana has three children — Makena, Kai and Mikah.

So it was on to a second career. 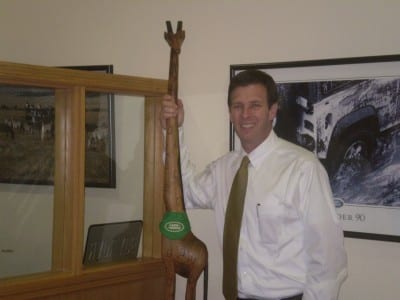 Always fascinated with automobiles, especially off-road vehicles, Totaro was checking out the new Land Rover LR3 one day with Deana. Totaro “hit it off” with the general manager, who was impressed with Totaro’s knowledge and passion of the brand, his character, confidence, personality and his ability to communicate.

“You’re pretty good at this – you should give Land Rover sales a shot,” he told Totaro.

Initially, Totaro declined, but the more he thought about it, the more he was intrigued. He had always been an off-road enthusiast, even during his early teenage years. At 16, he purchased his first car, a ’66 Jeep, specifically for off-roading in the Nevada desert.

“Those were the days,” he says with a grin, reminiscing. “The people off-roading today don’t know how great they have it in a new Land Rover. All you do now is turn on a switch or push a button then go have some fun – the new Rovers make safe off-roading possible even for the inexperienced and uninitiated.”

Land Rover’s Hill Descent Control (HDC) engages with the push of a button activating the computers that maintain a perfectly disciplined descent. Without touching the brake pedal, the vehicle will progress safely down a slope or hill at a few miles per hour … like it has its own brain.

“When we would go off-roading in my Jeep, we’d have guys hanging off the side of the car to keep it from rolling over,” Totaro says. “It was hardcore, bare bones, bare knuckles off-roading.”

Totaro could not be happier with his decision to be with Land Rover.

“I realized early on that I had a longing to interact with people,” he says. “When I was working for American Airlines, I was in a secured area. There weren’t many people I could talk to. When I left the airlines, it was like the lid was taken off the box I was in. It was great to communicate and interact with people again.”

Totaro’s fascination with Land Rover – and his familiarity of the brand’s history — is quite intriguing to customers.

“I love telling customers the history of Land Rover,” he says. “When they hear the story, it’s like, ‘Wow, that’s amazing.’”

Then, as if on cue, he goes into his spiel …

“Land Rover has a great story, going all the way back to its humble beginnings in the mid-1940s,” he says. “It’s no joke. You look at the heritage of Land Rover and the brand almost didn’t happen. It was made from scraps left over from World War II. It was inspired from the American World War II Jeep and it was originally built on a Jeep chassis. It’s amazing how it began and now it’s the industry leader in this product type.”

To which Larson says: “It has evolved, literally, as the premier luxury SUV on the planet. It’s an amazing success story. And it’s also remarkable that the people behind it had the vision to see how much more a four-wheel drive vehicle could be other than a Jeep.”

Sometimes, when a new Land Rover customer sees the price of the vehicle, they become a little weak in the knees. But Totaro quickly says: “Yes, it’s not a product for everyone.”

Land Rover “is not sensible transportation,” he goes on say. “This is not a Toyota or Honda, taking you from Point A to Point B. They’re good, reliable cars. But when you take ownership of a Land Rover, it’s like you are buying a luxury yacht, or a Gulfstream jet. You’re taking possession of a vehicle that is far more than just transportation. That’s the difference between Land Rovers and every day cars.”

And the brand is growing bigger every day, fueled by the worldwide demand for the vehicle.

“I wish Land Rover’s owners could pull back just a little bit,” Totaro says. “I almost wish they could slow the growth. I’d like to bring back the old days when Land Rover was a little niche for the select few that understood and truly appreciated the power and unique character of the vehicle.  Today it seems that nearly everyone is aspiring to own one someday.  The genie is out of the bottle and can’t be put back in.”