by Daniel Langhorne, Staff Writer, California Business Journal
A A 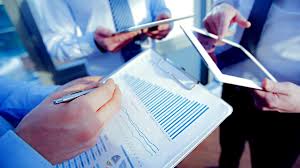 When executives at encrypted flash drive manufacturer IronKey needed help securing an early round of venture capital, they called in Dan Gravelle.

Under Gravelle’s oversight as a consulting Chief Financial Officer, the company grew from $2 million to $13.5 million in annual revenues within a year.

“We were all running as fast as we could,” Spencer says. “Dan owned that piece of it which meant that I didn’t have to dig into it and could focus on other critical matters.”

Gravelle was so successful in helping IronKey save money by renegotiating a deal with a vendor that the company was able to hire an additional engineer, which, in turn, increased productivity — and revenue.

“That’s the value a consulting CFO can bring to a company,” says Gravelle, who launched CFO Particeps in 2016 to help early growth-stage companies by providing interim – and impactful — Chief Financial Officers.

Gravelle puts the companies he works within two distinct categories.

The first are new companies that need help managing their finances but aren’t complex enough to require a full-time Chief Financial Officer. In these cases, the partners get to know the company with a checklist of the basics, including insurance, payroll, employee benefits, controls for internal expense, banking relationships, hiring human resources staff and reviewing audit requirements.

“When you’ve been doing it as long as we have it becomes second nature,” Gravelle says.

When working with energized entrepreneurs, the partners find themselves asking questions to help clients think through proposed growth and additional research and development projects. These clients tend to keep Gravelle’s team on for an average of two and a half years.

“We might have a different client every day of the week and each of these clients think their product is going to change that world and that type of thinking has a very positive effect on me,” he says.

The other type of client CFO Particeps sees are established companies that are in financial distress because of mismanagement. He affectionately refers to these as “smokejumping” assignments, named after firefighters that parachute into remote areas to fight wildfires.

“We haven’t yet encountered outright fraud, yet we help companies fix their audit report,” and in cases where loan payments have been missed, the partners have the experience working with bankers to “help get companies back on track with their creditors,” Gravelle says.

These types of assignments typically last for six to nine months. Gravelle and his partners are able to “put out the fire” that some companies find themselves in after getting rid of their CFO. He says that it’s typically easier for companies to recruit a new CFO that they would like to keep for four years if they hand the company “a clean bill of health.”

Once Gravelle’s team is on the job, the partners seeks out answers to questions like “how could these problems have happened” and “are there some processes that aren’t happening?”

One of the biggest assets CFO Particeps offers clients is a deep network in the venture capital community. This has not only proven to be tremendously valuable  to clients looking for their next round of funding but also to CFO Particeps as a major source of referrals for prospective clients.

Beyond renegotiating contracts with vendors, Gravelle helped IronKey coordinate employee benefits costs and structuring the company in a way that was agreeable to its capital partners.

“Dan knew just the right things to say to the venture capitalists to help structure the deal,” says Spencer, IronKey’s CTO. “It was quite impressive.”

Specifically, Gravelle encouraged IronKey to ‘back burner’ research and development projects that were cool and not bringing in revenue. The strategy was to prove to venture capitalists that they were “tightening spending.”

Thanks to Gravelle’s work, IronKey is one of the fastest technology companies to reach $20 million in annual revenue. The software side of the company was later sold to Proofpoint. 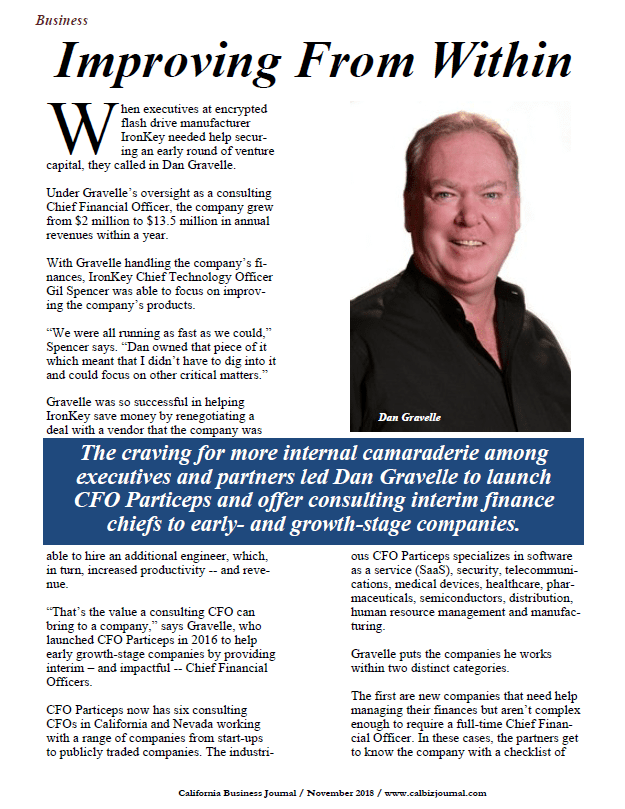 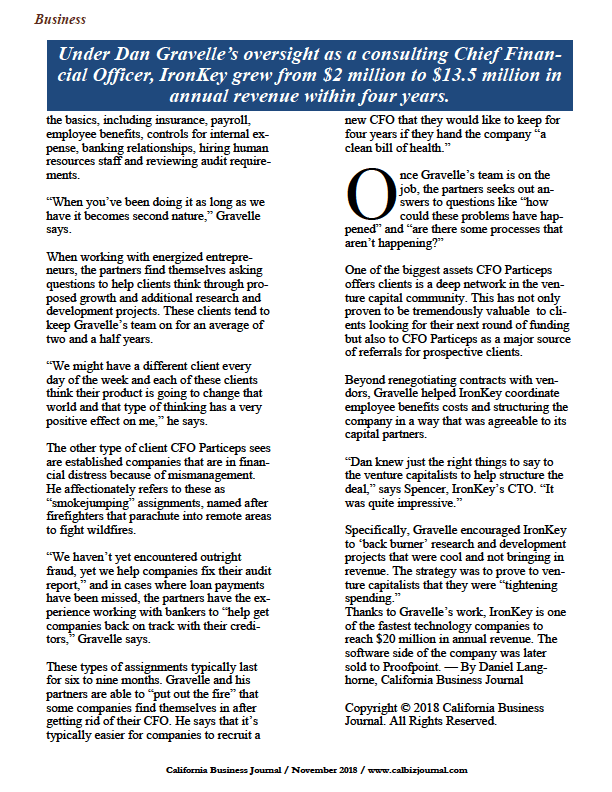