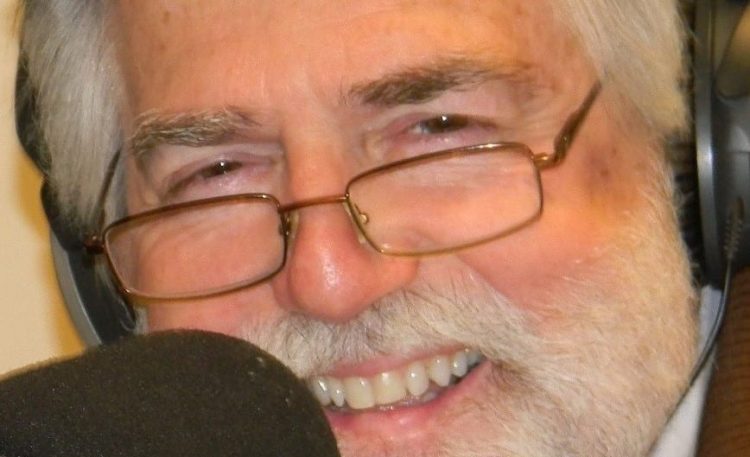 Whether consulting for Fortune 500 companies or advising married couples on how to strengthen their relationship, internationally acclaimed speaker, author, trainer and psychotherapist Dr. J. Mitchell Perry shows clients how to maximize human relationships for personal and professional success.

On a sunny Southern California weekend, you might find Dr. J. Mitchell Perry leading a group of weekend warriors on a sailing expedition off the Golden State coast or golfing at an ocean side resort. These are just some of the adventure training programs that the renowned human behavior expert offers clients to put the teamwork skills gained through his classroom training into practice.

“We have used sailing, whitewater rafting, skiing, volleyball, mountain biking, cattle and horses, cooking, and other circumstances in which people have to get out of their day-to-day experience,” says Perry, CEO of Ventura, Calif.-based JM Perry Learning Technologies. “The perception is that it is a little dangerous, though in reality it is very safe, but it has to be a high-impact experience in which they realize that they must replace their counterproductive habits with productive ones.”

Dr. Perry’s motivation for helping human relationships succeed goes back to his childhood in Santa Barbara.

“I got into this field for the same reason that former drug addicts and alcoholics go into substance abuse counseling. I grew up in a very dysfunctional family, which meant that I had to learn how to get unstuck from all of that. And I was also very fascinated with the whole dimension of people,” he says.

Decades later, the University of the Pacific alumnus is now in his 43rd year of doing what he loves best.

“I take my peculiar personality and continue to remove the clinical and theoretical nonsense and psychobabble, make it about common sense, and add humor, which is the anesthesia.”

Investing in the Human Dimension

From tech giants such as Amazon to IT industry behemoths like Accenture, Dr. Perry attracts a devoted following who seek to improve the most powerful and expensive, yet most underperforming resource in the American economy: people.

“If this is the most powerful and expensive resource, what are you doing on an ongoing basis to invest in getting the best return?” Dr. Perry asks. “More than half the time, business owners invest in technology, equipment and information, yet neglect investing in people. And people generally underperform for all sorts of reasons, which is our particular scope of practice.”

When examining the root causes of relationship dysfunction, Dr. Perry looks at the American educational system, which largely omits human interaction and fiscal literacy – both integral factors in being successful – from school curricula.

“The only way you would fly an airplane would be with a lot of guidance and training,” he says. “On the other hand, you try to fly a marriage without knowing a thing about how to do it. Is there any wonder that in California we have a 55% to 60% divorce rate within five to eight years into the relationship, while we have a very small percentage of airplanes that crash? This is because people try to fly a marriage without learning how to do it.”

Whether in a marriage or business, Dr. Perry says humans interact with each other using one of three methods: criticism, silence or reinforcement.

“About 95% of all adults become experts in two of the three – criticism and silence. The one that is most therapeutic – ongoing reinforcement – is the one we experience the least. In business, this costs a lot of money,” he says. “When people receive ongoing criticism and indifference, what do you think happens to their work performance?”

The impact of poor relationships can be a make-or-break factor in business success. As an example, Dr. Perry notes that diners often return to a restaurant in which the food was only average, but the service was exemplary, yet eschew an establishment with the best cuisine but poor service. He even partly credits the shift to digital platforms in retail to poor or ineffective customer service relationship building in brick-and-mortar stores.

“It is always about the relationship. When someone says ‘you need to see Dr. Perry, he’s the best,’ the recommender hasn’t received any clinical training. It is about the relationship,” he says. “Most of the time, when people improve the relationship, it impacts the qualitative outcomes, such as positive feedback, and the quantitative impact, which includes the cost of business going down and the revenue going up.”

JM Perry Learning Technologies is focused on improving the people dimension in four areas: relationship effectiveness, high performance effectiveness, character development, and common sense. The tools for success in these interrelated areas are often things that most adults know but fail to put into practice.

“With common sense, you generally already know it,” Dr. Perry says. “Rather than having to figure it out, it is right in front of your face. But insanity is what most people do. “For most people, there is a big difference between what they know (common sense) and what they routinely do (insanity). That means they practice the same bad habits and achieve the same bad outcomes.”

The solution is to “do what you know” to make the right behavior or practice an instinctive habit that becomes ingratiated into the daily routine (such as brushing your teeth or exercising).

Often I personally work with the C-suite of major organizations to custom-tailor programs to achieve high performing outcomes and improvements in their bottom line.

Because of Dr. Perry’s proven tools and guidance to enhance performance and relationship effectiveness, his clients have realized well over $10 billion in increased revenue while decreasing the cost of doing business.  His expertise continually demonstrates how improved relationship and performance skills produces bottom-line results. 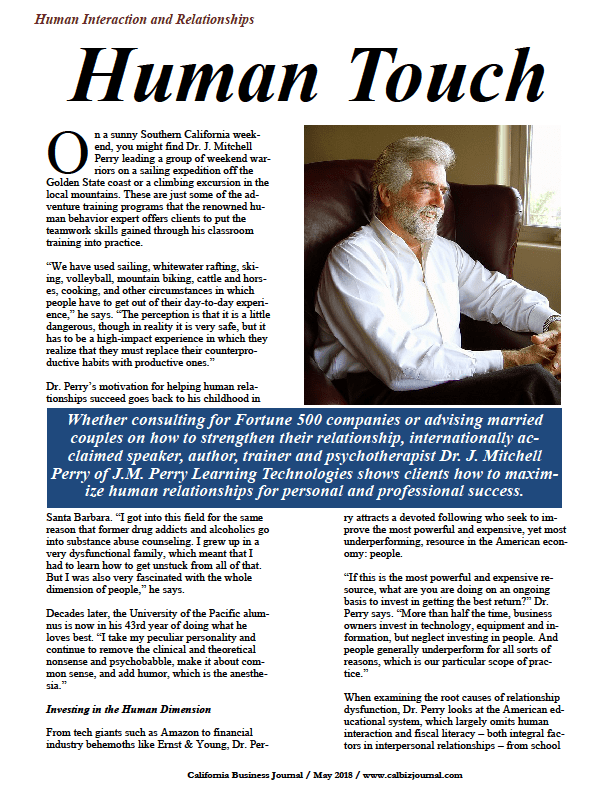 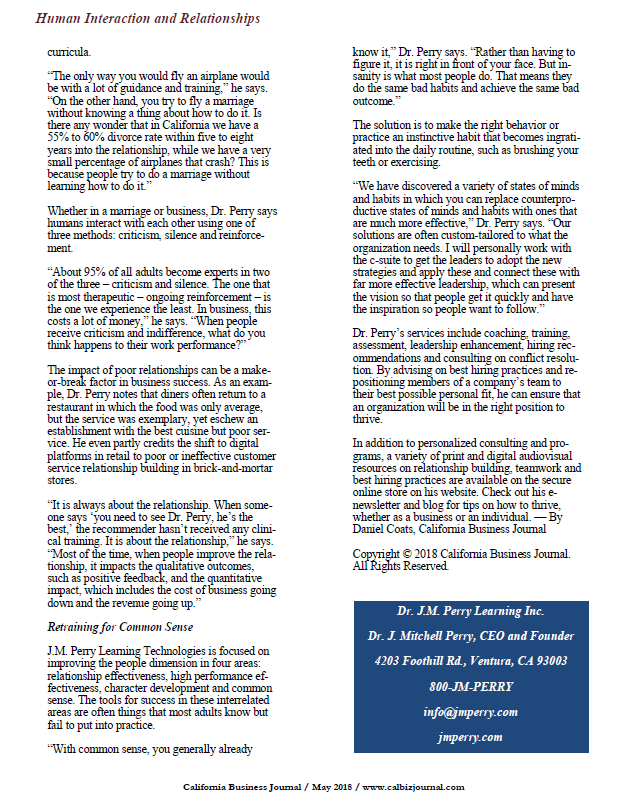