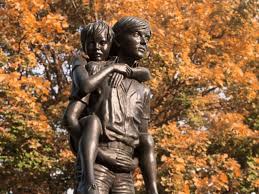 Boys Town California held its annual fundraiser, Uncork for Hope, at the Center Club Orange County in Costa Mesa, Calif. The event was packed – standing room only – and raised more than $110,000 in donations.

Until he arrived at Boys Town.

Boys Town is one of the largest non-profit child-care agencies in the country with two major facilities in Southern California. Founded almost 100 years ago and headquartered in Omaha, Nebraska with 11 facilities nationally, Boys Town provides compassionate treatment for the behavioral, emotional and physical problems of all children – boys and girls — and their families. The success rate at Boys Town – along with the graduation rate of its participants – are off the charts.

Just recently, Boys Town California held its annual fundraiser, Uncork for Hope,  at the exclusive Center Club Orange County in Costa Mesa, Calif. The event was packed – standing room only – and raised more than $110,000 in donations.

“Phenomenal event, phenomenal turnout,” said Adam Miller, the chair of the Uncork for Hope Committee and managing partner at the law firm of Miller Miller Menthe LLP. “We could not have dreamed of more support from the Orange County community and local supporters of Boys Town California.”

Uncork for Hope was Miller’s idea. He came up with it four years ago. The event has been an unprecedented success … with many more successful years to follow.

“Boys Town is a very special and unique organization,” Miller says. “It really makes a difference in children’s lives. The graduation rate of children at Boys Town is higher than the general population. That says it all. When I heard about Boys Town, and learned about its impact and successes, I knew this was an organization that I wanted to support and be a part of.”

Thomas – the young boy introduced at the beginning of this article — experienced one success after another after entering Boys Town. He went to college, majoring in psychology and philosophy. He worked on Capitol Hill. He has been a featured speaker at a number of events and he plans to obtain a master’s degree in social work while pursuing a career as a clinical psychologist for foster youth.

“What Boys Town does is invest in you,” he says. “They took me, this lost kid, and made me into something.”

Lawren Ramos began working at Boys Town 12 years ago as a Youth Care Worker. He remains there today — as the Executive Director.

“Once you see the transformation these children make – turning a terrible life that could lead to death or prison into a productive life – you can’t help but want to be a part of it,” Ramos says. “That’s what happened to me. I couldn’t leave. We take many children with no hope, no future and make them productive members of society and the workforce. I get tremendous satisfaction working in this capacity for the cause of helping children and families.”

Boys Town was originally established for at risk boys only. Soon, organizers opened the facility up to girls and renamed the organization to reflect the admission of girls. The organization has had as much of a positive impact on girls as it has had on boys.

Take Diana. Like Thomas, her life was spiraling out of control. She was kicked out of her already-unstable home by their mother’s husband at the age of 14. The only place Diana and her older sister could find refuge was in a drug house.

Eventually, they had to resort to selling drugs just to keep a roof over their head and stay alive.

One day, an argument in the house resulted in the death of a drug dealer. The dealer who committed the crime ordered Diana to clean up the bloody crime scene. When police arrived, Diana was arrested and placed in a juvenile detention center. She thought her life was over.

Soon, she discovered Boys Town, applied to get in and was accepted. The compassionate care and teaching helped transform her into a confident young woman and a vastly different person from the scared teen who had arrived from a detention center.

Diana graduated in 2001, attended Creighton University on a full scholarship and later went to law school there, earning double master’s degrees. Today, she works at a law firm in Arizona.

“Boys Town doesn’t give up on you,” she says. “It’s not just like you’re there and then you leave. They teach you to build healthier relationships and they care about you. It shows you that there are better things out there.”

“These programs and services impact the lives of over 19,500 kids and families in California each year,” says Jon McClintock, a committee member with Uncork for Hope and Board Member of Boys Town California.

Boys Town was founded in 1917 as an orphanage for boys and has grown into a pioneering nonprofit organization dedicated to helping troubled youth.

Boys Town has been admitting girls since 1979. From 2000 to 2007, the organization was named Girls and Boys Town, before changing back to Boys Town.

In a striking recognition that hardship knows no gender or race, Boys Town soon will introduce a new symbol at its entrance, a statue of an older boy carrying a littler girl on his back. The young man is black, the girl is white.

Congress has authorized the U.S. Mint to produce a series of coins commemorating Boys Town’s 100th anniversary in 2017.

About the Center Club Orange County: Located on the garden level of the award-winning Center Tower, the Club is adjacent to the Segerstrom Center for the Arts. Center Club is the premier members-only private business and social club in Orange County. It is an ideal environment for entertaining clients or friends and for holding private social and business meetings. In addition, Center Club Orange County offers members a variety of speaker programs, special events, pre-theater dinner on performance nights, outings and children’s events. The unique water and sculpture gardens beyond the Club’s dining rooms were especially created by Peter Walker to provide a sense of inspiration and beauty. Two original sculptures by renowned Swedish artist, Carl Milles, and a notable collection of California impressionism artwork add to the elegant drama of the Club. Center Club’s 30-year history of excellence extends to its unparalleled cuisine, gracious service and exquisite surroundings. The elegant table settings, exceptional service and superior vintage wines create an incomparable dining experience.