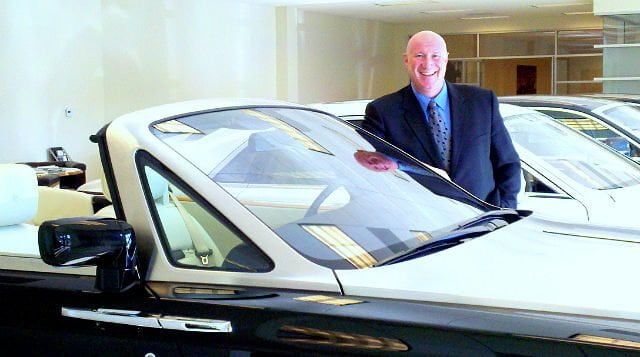 At 6-foot-2 and 265 pounds, Vadim Fedorovsky is intimidating at first glance, but as Jaguar Land Rover Anaheim Hills GM Sven Larson says, “He’s a gentle giant – a sweetheart of a guy.”

IMAGE GROWING UP in a country of 150 million people with a GDP of $3.5 trillion yet only manufactures but one automobile that virtually everyone in the country drives.

Sounds like something out of a SciFi film, huh?

When Vadim Fedorovsky was growing up in Soviet Russia in the 1970s, the communist nation manufactured just one automobile — Volga.

“Most people have never even heard of Volga,” Fedorovsky says with a laugh.

For Americans, Germans and Brits – countries that are the world’s premier automakers – a nation like Russia producing just one vehicle is quite strange — yet it is not a surprise when you consider this…

“In Russia, if you need milk and you get to the store five minutes after it opens at 6 a.m., there won’t be any milk left for your family,” Fedorovsky says.

That’s quite difficult for most Americans to comprehend.

“One of the jokes about Russia is that we have 100 TV stations – Channel 1 is propaganda and Channel 2 to 100 is a KGB agent saying in a low, husky voice, ‘Go back to Channel 1,’” Fedorovsky says with a hearty laugh.

Despite Russia’s lack of automotive ingenuity, Fedorovsky was a passionate car enthusiast – as passionate as anyone can be. Whenever he’d see a car magazine, which was about as rare as Russia changing leaders, his eyes would near pop out of his head.

He devoured each and every American and British car magazine he could lay his hands on. He was obsessed with the styles, designs and engineering of the vehicles.

When it came time to “register” for a profession as a young teen, Fedorovsky, to no one’s surprise, choose automobiles. He worked on Volga day in and day out. He built them, repaired them, rebuilt them and tore them apart, piece by piece.

No one, it turned out, knew the inner engineering works of an automobile better than Fedorovsky.

By the early ‘80s, the Fedorovskys wanted a better life for them and their young son, so they petitioned to come to America. The petition was approved – then suddenly revoked. The family was crushed – not only because their petition was rescinded but also because they had already left their jobs and home, as is required by the Soviet government.

They were now what Russia referred to as “Refusniks.”

“For two years – two terrible years — we were in limbo,” Fedorovsky says. “When you apply to leave Russia, the government makes you resign from your job and sublease your apartment. Basically, they turn your life off. We fell in between legal and non-legal status. It was illegal for us to even work.”

Luckily, the Fedorovskys had an “out” plan: Vadim’s grandmother’s sister lived in England in the early 1900s and had 13 children. They all wound up having 10+ children. One of them petitioned the Russian government and the Fedorovsky’s were granted their exit to England.

By 1981, the family was in Chicago; four years later they moved to California, where Fedorovsky’s father landed a job as a mechanical engineer at the Fluor Corporation, one of Orange County’s largest and most decorated companies with global reach.

Meanwhile, Fedorovsky’s passion for cars never waned. He made it his career. He wound up owning and operating three body and auto shops for high-performance race cars from 1995-2007. He then ended up selling his business and going into sales and management.

Today, he is flourishing at Jaguar Land Rover Anaheim Hills, serving his clientele with all the spectacular automobiles the dealership has to offer. 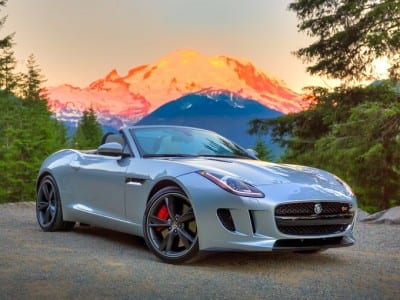 What makes Fedorovsky so effective at his craft is his knowledge of the engineering and technology of the vehicles he represents. Most sales associates in the business do not have the technical background which comes naturally for Vadim.

“I have not seen anyone in sales with Vadim’s knowledge and technical skill set,” says Khalid Omar, the General Sales Manager at Jaguar Land Rover Anaheim Hills. “He’s very rare in this business. He has tremendous knowledge of the mechanics of cars, which isn’t surprising since he has built his own performance cars.

“He’s tuned up the best of the best – Land Rover, Jaguar, Porsche and Audi, to name a few. If someone wants to know how a Land Rover and Jaguar is built – or any other car for that matter – and learn the process of how an engine works and what makes an engine more effective than another, Vadim can do that. He’s that technical. He’s truly a ‘car’ guy.”

At 6-foot-2 and 265 pounds, Fedorovsky is intimidating at first glance, but as JLRAH General Manager Sven Larson says, “He’s a gentle giant – a sweetheart of a guy. He is the quintessential car enthusiast. His interest is automatic, genuine and runs very deep. He transfers all of that enthusiasm and knowledge to the sales floor.” 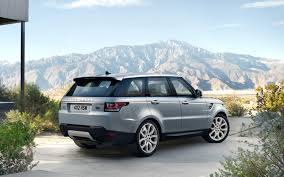 What further impresses Larson is that “Vadim is not your typical car guy. He is not just passing through. This is his career. People like Vadim are true car people. I have no interest in people who are passing through versus ones who are committed to make this their career.

“He is also a pleasure to work with — and he’s a great family man,” Larson adds. “He loves coming to work. He’s focused and is very proud of the work he does and his production. No one is better than Vadim at following up with customers. If he says he is going to do something, he does it. He has a really strong work ethic and is very appreciative of the opportunity he has with our dealership. With that kind of attitude, much success will follow for Vadim.” 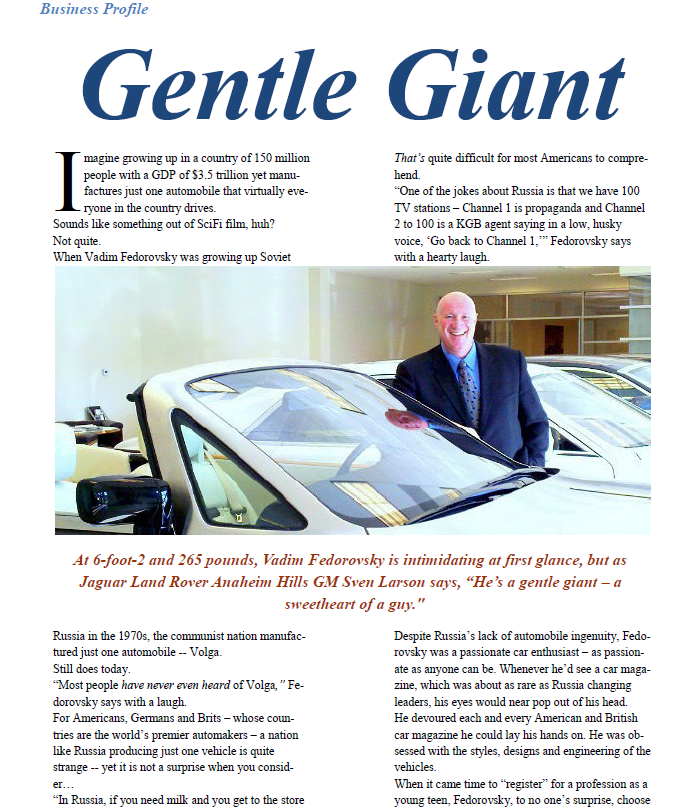