Former broker Joshua David Nicholas has pleaded guilty to involvement in a crypto Ponzi scheme. The scheme ran in the name of a fictitious trading bot, EXBOT. Nicholas and his co-conspirators raise over $100 million from investors. The money was then used as a personal fund to buy luxury items, including luxury vehicles, expensive services, and high-end clothing.

According to prosecutors, Nicholas ran a scheme in which he promised investors a daily return of 1% by investing in cryptocurrency. Nicholas raised over $100 million from investors before the scheme collapsed. He used this money for laundering via foreign cryptocurrency.

Nicholas has pleaded guilty in court. “Per California’s securities law, Nicholas now faces up to 5 years in prison. He may also have to pay a fine of $10 million along with the jail sentence,” says San Diego fraud attorney Samantha Greene.

All the participants made false claims to the investors. This ordeal is another example of the risks involved in investing in cryptocurrencies. While there are many legitimate opportunities in the space, many fraudsters also seek to take advantage of unsuspecting investors.

How Did Nicholas and EmpiresX Make Money?

Nicholas and his partners used social media to create an online persona via zoom calls in front of potential investors. They marketed the EXBOT artificial investing trading bot to the investors to maximize their money return. Moreover, their presentations, projections, and company plans were all made up. 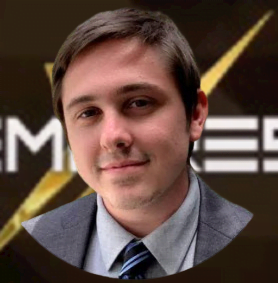 However, EXBOT was fake, and their company EmpiresX was a Ponzi scheme to launder money from all the investors. They used the money collected to pay initial profits to all the investors. A shocking revelation was that the firm wasn’t registered with the SEC.

Joshua Nicholas was a former broker who recently confessed to involvement in a Ponzi cryptocurrency scheme. Nicholas worked as a broker for four years, from 2016 to 2020. At that time, he was accused of misconduct by different clients.

It was revealed that he had been engaged in numerous activities that were deemed to be unethical, including money laundering, giving dangerous advice, and other prohibited practices. He forged the client’s signature, due to which they lost $1 million. He also provided false information, sold others’ investments, and marketed false business skills.

While many were surprised by the news, some were not. Those familiar with Joshua’s background knew he had a history of engaging in risky and illegal behavior. He was previously barred by the Financial Industry Regulatory Authority (FINRA) for his misconduct. Therefore, his legal right to be a broker ended in January 2022.

As per FINRA, he used false information to get a loan of $300,000 for his company. These funds were then misappropriated in fake brokerage accounts. Even before the Ponzi scheme, Nicholas was always involved in illegal money laundering.

All About the California Corporations Code

The California Corporations Code is the body of law governing corporations in California. This code is divided into several parts, each dealing with a different aspect of corporate life. The code is constantly being revised and updated, so it’s important to keep up with the latest version.

Section 12(a)(2) of the code covers security fraud that makes it unlawful to sell or buy a security with false information/omitted information that may mislead a person into investing. As per Section 25540(b) of the law, anyone who doesn’t comply with the Golden State’s security laws may go to prison for up to five years under 1170 of the Penal Code.

Moreover, security fraud is considered intentional if a person is misled with false corporate information. It also includes criminal negligence in ignoring information. So, someone who intentionally commits fraud may be prosecuted. In addition, anyone who unknowingly becomes a part of fraud may also face charges. This includes an investor that offers insider information and a broker who advises on fake information. Omitting information such as a risky investment may also be a crime.

Due to this, anyone is susceptible to being charged with fraud. Defrauding for property or money for a false claim may be prosecuted as a felony or a misdemeanor. While the code is comprehensive, it is not always easy to navigate. For this reason, many businesses choose to work with experienced attorneys to ensure compliance with the law.

Another code that comes into play is California’s Penal Code 532 PC. According to this, theft is an unlawful accumulation of property or funds. This may be acquired with fraud, force, or manipulation. Any untrue statement or omitting an important part of the information may lead to a misdemeanor or felony.

How Can a Criminal Defense Attorney Help with Fraud Charges?

If you are facing fraud charges, an experienced attorney at Sevens Legal, APC, can help you understand the charges against you and mount a defense. The attorney can also negotiate with prosecutors to reduce or dismiss the charges. The attorney will represent the defendant in court if the case goes to trial.