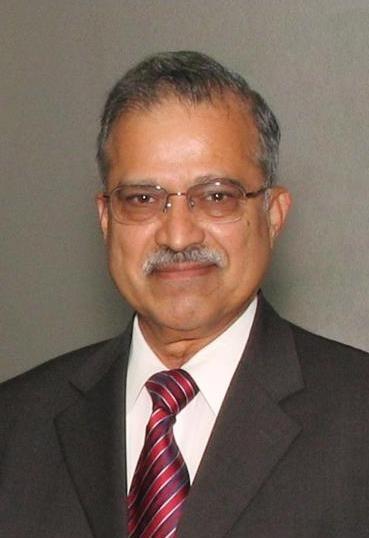 Pervaiz Lodhie of LEDronics is considered "the Thomas Edison of the LED revolution."

WITH THE LED REVOLUTION EXPLODING, EVERY DAY MORE AND MORE COMPANIES AND CITIES ARE CONVERTING TO energy-saving, eco-friendly, environmentally-safe LEDs as the mandate for phasing out traditional incandescent bulbs and CFLs inches closer.

As this seismic shift unfolds, one of the primary people responsible for this breakthrough change is Pervaiz Lodhie, CEO of LEDtronics in Torrance, Calif.

“Pervaiz is the Thomas Edison of the LED revolution,” says Jeff Mizel, a lighting and electrical consultant for Fortune 500 companies for a half century.

GE engineers call Lodhie nearly every week for advice and insight about LED-related products and innovations. So do engineers from General Dynamics, Raytheon, Lockheed Martin, Schneider, Siemens and Caterpillar, and Toyota — all the big boys. Eighty percent of Fortune 500 companies use Lodhie’s products.

“No one knows more about LEDs and no one has done more with them than Pervaiz,” Mizel says.

As a five-year-old, Delhi-born Lodhie was fascinated with electronics, engineering and lighting. While other kids were out playing soccer, he was custom-designing yoyos, spinning tops, aquariums, aircraft-shaped tie clips and bicycles – at the age of 8.

In 1980, he immigrated to the U.S., received a Bachelor of Science in Mechanical Engineering, and in 1983, he started his own LED company from his garage in Torrance. Today, LEDtronics is a 63,000 square foot building with 200 employees.

“Pervaiz is the innovator and LEDtronics is the industry front-runner,” Mizel says. “Their research and development is by far the most extensive of any company in the field. Others wait to see what LEDtronics does and then copy it – or try to copy it.”

It’s a proven fact that LEDs save cities, states, companies and organizations millions of dollars annually.

Just ask any of LEDtronics’ clients. 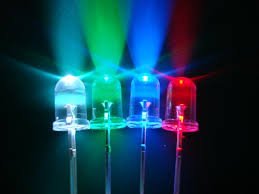 The company just completed an eco-friendly lighting project at the Pasadena Central Library that will save the City of Pasadena thousands of dollars. LEDtronics improved the lighting conditions at the library and reduced energy consumption by 90 percent. It also reduced heating and air-conditioning costs.

“Over time, it will save a significant amount of money and energy for the Library and the City of Pasadena,” Lodhie says. “This is the future of lighting.”

Other cities are taking note.

The historical pendant lighting fixtures in the main common areas of the Pasadena Library were important to retain. LEDtronics installed a high-power LED cluster designed for retrofit into the pendant fixtures without compromising the Library’s historical integrity.

“Every light at the Library that we replaced was using 900 watts of ballasted power consumption. We reduced that by 90 percent,” Lodhie says.

The Library’s 900-watt energy-inefficient metal-halide lighting was replaced in each pendant fixture by a 95-watt LED product.

The major concern for the Library and the city was reducing burdensome maintenance and power consumption costs for the city and improve the quality of lighting.

Since the old metal-halide bulbs were buried within the library fixture’s pendant bowl, most of the lumens production was being dampened. The light intensity that was left over was inefficiently bouncing off the upper reflector surface of the pendant fixture to create ambient lighting for the Library patron areas.

With the new 95-watt LED cluster of light project upwards from the top of the pendant bowl directly, the City is able to save 805 watts per fixture for its 30 fixtures; at 0.14 cents per kWh, that equates to an estimated $10,000 in annual energy savings.

Additionally, the City of Pasadena says that the high cost of maintaining the hard-to-reach suspended fixtures is virtually eliminated, as the old metal-halide bulbs and ballasts no longer need to be replaced on a continuing basis.

Pasadena decided to do the project due to the success of the LEDtronics-manufactured LED ceiling panels installed two years earlier in the downstairs document room at the Library. The 40-watt LED ceiling mount panels replaced the Library’s old 90-watt ballasted type fluorescent fixtures during its refurbishment in 2008.

The LED panels had been operating continuously for eight hours per day five days a week ever since. Close observation has shown that there has been no diminishment of LED light intensity since that time, thus proving the sustainability of well-engineered premium LED products, Lodhie says.

Thanks to LEDtronics, the Farnsworth Art Museum in Rockland, Maine saves $20,000 annually on LED lighting.

Three years ago, the museum took extreme measures to reduce the operational costs of its building.

With the economy down and a need for budget relief, “we decided to leap past the standards of most museums and become innovators,” says Aedan Jordan, Assistant Superintendent at the museum.

That innovation was LED lighting. 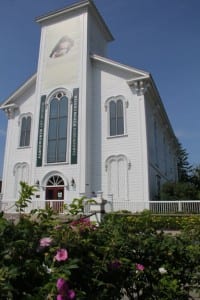 Farnsworth found that LEDtronics’ LED lighting would not only save energy and money, but it would promote art conservation, environmental stewardship, and enhance the museum visitor experience.

LEDtronics showed the museum samples of styles of lamps that could replace the incandescent lamps it was currently using in its galleries. The curatorial staff was impressed with the quality of light available from the lamps it chose, and the improvement in the way the artwork appeared under LED illumination.

When the Farnsworth made the decision on which lamps to use, it began calculating the savings and payback period. The museum bases its energy and monetary saving projections on having at least 500 lamps in use in its 15,500 square feet of gallery space. Before the LED project started, a mix of 50 to 90 watt lighting was used to light the galleries.

“We knew we could not find a LED replacement for all the lamps because LED bulbs are not made to fit all of the types of fixtures we were using in the galleries,” Jordan says. “So we streamlined our operation, and we decided to change all our fixtures [to use a Par 20 or Par 30 lamp]. These two styles proved to be the most versatile for our purposes.”

When the museum looked closer at its lighting budget for the curatorial department, it discovered some information that helped save more energy and money. The museum’s annual average bulb replacement budget for the three prior years was $2,800.

The life expectancy of most incandescent bulbs is 2,500 hours. That means, in theory, that if the Farnsworth is open seven days a week, as most museums are, it would need to essentially replace all its lamps within one year.

“After I verified we were actually spending the amount in the budget every year on lamps, I could see some promising budget relief,” Jordan says. “With the expected LED lamp life of 50,000 hours, I was confident we would see a great return on our investment.”

The museum estimates the following savings:

• Approximately $17,000 of electricity savings due to reduction of lamp wattage in gallery spaces;

• There was a large reduction of heat generated in the galleries, requiring less mechanical cooling. Estimates say that the former lighting was generating 135,115.2 Btu/hour of heat. The LED project generates 16,650.56 Btu/hour — a reduction equal to 10 tons/hour of
cooling;

• All LED lamp changes will have a payback period of 2.1-2.5 years and potentially even shorter should their utility rate increase. 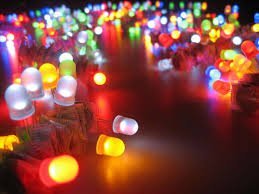 LEDs also have a huge impact on companies, cities and residential use when it is combined with solar. Lodhie believes that with the nation’s movement toward solar energy, the ideal clean-energy marriage is solar and LED lighting

“When President Obama announced in 2010 that the White House would place solar panels on its roof to save energy, it was well received by those wishing to create cleaner energy and to diminish reliance on traditional electrical sources that are dependent on coal and oil,” Lodhie says.

But the problem with the President’s announcement was that it was not an effective way to address the objectives to reduce U.S. dependency on traditional resources of energy and foreign oil, according to Lodhie.

“U.S. energy independence policy has not presented to businesses and the public a correct explanation on the best use of solar energy for business or residential use,” he says.

There will be energy savings if the current direction is followed, but they will be far less than if the current process is not reversed. Currently, the process is as follows: solar panels are placed on a building’s roof while there is no change to the internal lighting system. This process, if continued, does not — and will not — produce the maximum efficiency or savings. It is far more efficient to first replace as many inefficient light bulbs or lamps as possible with highly-efficient LED bulbs or lamps, which, when installed with solar panels, will achieve the maximum efficiency of solar power.

Here are three scenarios that present qualitative proof on what the proper direction U.S. Solar Energy Policy should follow in its education of businesses and citizens as they begin to increase the use of solar energy.

First Scenario: Every 100-watt solar panel will power one (Par 38 type) flood light bulb, which is typically used in large room lighting. Currently, there are potentially 100’s of these energy-hungry bulbs in the White House wasting 95% of electrical energy and using only a 2.6% of the 100-watt energy, Lodhie says. Additionally, these incandescent and/or Halogen lamps place a heavier load on air-conditioning systems due to the high heat they generate. There is also a great deal of light pollution, which is defined as excessive wasted light being generated.

Second Scenario: Every 100-watt solar panel may power three mercury-containing fluorescent tube or CFL light bulbs (which have been utilized as a bridge for the replacement of old incandescent light bulbs) in the White House. But again, these also produce significant heat temperatures that place additional loads on air-conditioning systems due to the heat generated. The heat of fluorescent tube lighting is actually greater because of a need for a ballast, which compounds the heat generated.

Third Scenario: Every 100-watt solar panel will power six long-lasting LED light bulbs. The heat generated by these LED light bulbs or tube will not generate heat at a level equal to the incandescent bulb, fluorescent tubes and CFL bulbs.

By comparing the three aforementioned scenarios, we have a clear picture of the best scenario as follows: 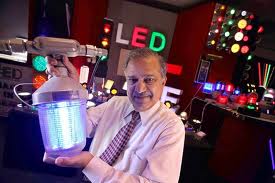 “To utilize solar panels to their highest efficiency, it is imperative to have the lighting source used within the structure be of the highest lighting efficiency for the maximum intended energy efficiency and cost savings of solar panels,” Lodhie says. “Utilizing both solar panels and LED lighting product will shorten the return on investment cycle a great deal.”

Ideally, instead of using solar panel energy storage batteries, it would be best to have the solar power go directly to the power line because reverse metering is a better method than using batteries. LED bulbs also provide clean green lighting as well as a huge savings in replacement since the LED bulb life cycle exceeds incandescent, CFL lamps and fluorescent tube lamps by a large margin.

What Obama and the Department of Energy are doing is leaving on the table the most positive contributing tool to achieve energy independence, savings and efficiencies that would maximize the advantages of solar energy by not initially addressing the use of the most efficient lighting product – the LED.

“Hopefully soon, the public and businesses will be educated to the advantage of bring together solar energy and LED green technology to initiate a large step toward U.S. energy independence,” Lodhie says.