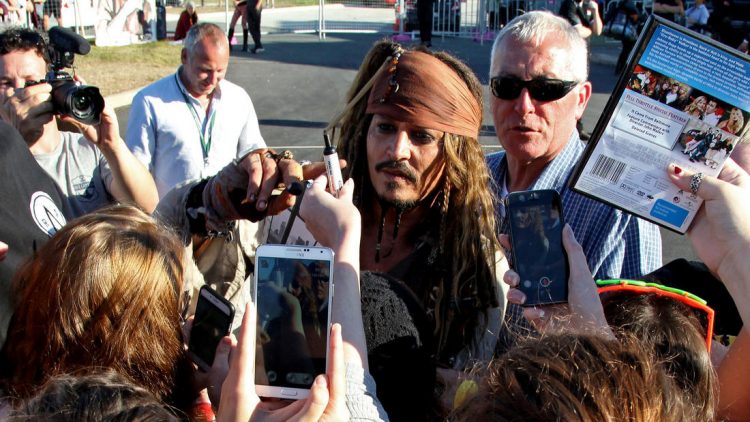 DISNEY RECEIVES HUGE GOVERNMENT GRANT TO MAKE A ‘PIRATES OF THE CARIBBEAN’ FILM OUTSIDE THE U.S. 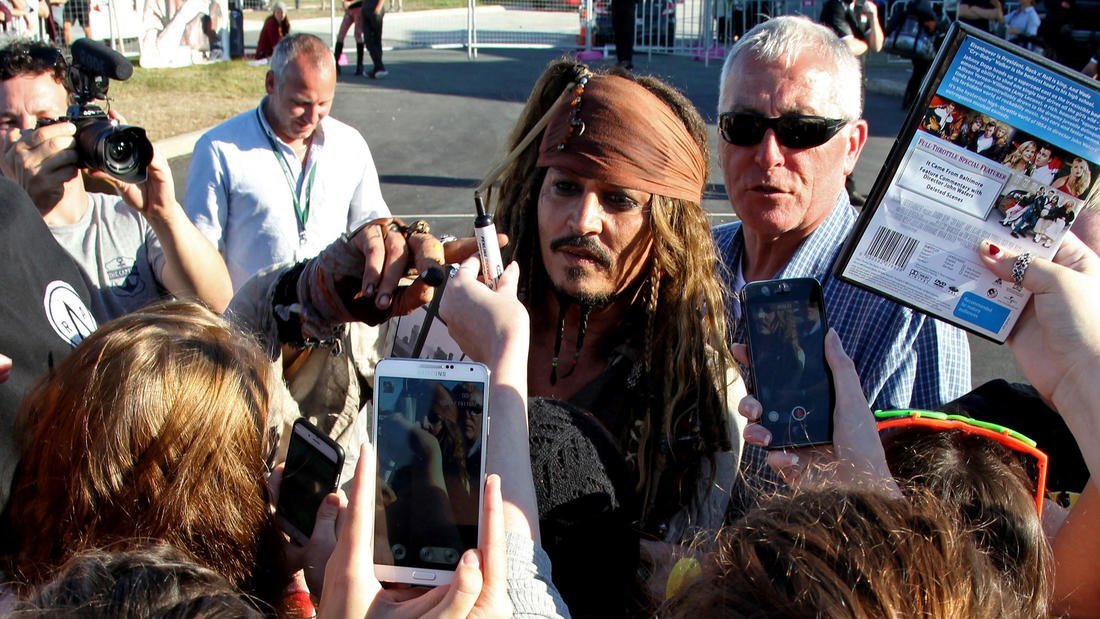 ‘Pirates’ Film made in Queensland, Australia; Nobody Will Say How Much Disney Received.

But that’s exactly what the Queensland, Australia, resident wound up doing after making a seemingly innocuous records request under his state government’s Right to Information Act in 2015.

Boyd, 39, wanted to know the size of the production grant the Queensland government gave to Walt Disney Co. to entice the company to shoot the fifth “Pirates of the Caribbean” film there. He was skeptical of claims that the movie would be a financial boon for the state.

“It was, ‘Hang on a sec, who is actually working on this? We don’t really see any benefits here,’” said Boyd, who heads a video production company in Queensland. “We went, ‘OK, well how much is this costing, as a taxpayer?’”

But Burbank-based Disney and two Queensland governmental entities took the unusual step of fighting the release of the information, contending it was confidential and that making it public could damage Disney’s business.

Film business and tax credit experts in Australia and the U.S. said they could not recall another instance in which a government or government-backed entity sought to keep secret the size of a subsidy offered for a film production. In the U.S., such information is typically available and released annually.

The Queensland incentive wasn’t the only one Disney got for the project: Australia’s federal government gave Disney $21.6 million — the equivalent of about $20 million U.S. at the time of the 2014 deal — to lure the production to the country. It was the biggest individual contribution the government has ever made to the financing of a movie.

Such large film subsidies have come under growing scrutiny from economists and others who argue that the offerings do not help as much as advertised.

“They tend to be very costly and don’t create the number of jobs that is alleged, and the tax revenue doesn’t come back,” said Michael Thom, an assistant professor at USC and an expert on production incentives. “The research shows it probably boosts the wages in the short term for people who work in the industry, but it doesn’t last. The bigger picture here is, when you don’t know how much money is being given away there is no way of knowing if it is effective or not.”

An independent auditor working for the Queensland government has made a similar point. A 2015 report by the auditor, Queensland Competition Authority, said that the state government should stop giving incentives to major film projects that “deliver benefits largely appropriated by international production companies” and instead focus on supporting productions that “deliver net cultural benefits to the state.”

In 2014, Queensland’s then-Premier Campbell Newman said that the “Pirates of the Caribbean” film would “bring in about $100 million to Queensland and create thousands of local jobs,” according to a press release announcing the deal.

There is no evidence, however, those benchmarks were reached. When asked to provide data showing the film’s actual economic impact, Screen Queensland, the government-backed agency that issued the state’s grant, declined to do so and referred The Times to Newman’s statement made before production began.

Asked to provide financial details of the subsidy it gave Disney, Screen Queensland said in a statement that the information was part of a confidential business matter. It also defended its incentive program, which offers production attraction grants and state payroll tax rebates, among other options.

“Incentives attract productions that create jobs and new economic [spending] in the state, increase investment and innovation in new technology, equipment and other infrastructure, and build a stronger, more highly skilled industry base that attracts other productions,” Screen Queensland said in a statement.

In September, the agency appealed an August decision by the Office of the Information Commissioner of Queensland that the incentive information should be made public. That appeal will now be heard by a judge within the Queensland Civil and Administrative Tribunal.

The total value of assistance Disney received from the state and federal governments is estimated to be in the range of $70 million to $90 million Australian, according to Australian media reports.

Among entertainment companies, Disney is adept at seeking out locales that that are willing to reward it with millions of dollars in credits and rebates. In recent years, the company has shot several Marvel Studios movies in Georgia, made “Star Wars” films in Britain, and earlier this year secured an $18-million tax credit for the upcoming picture “A Wrinkle in Time,” the largest production incentive ever awarded by California.

The kerfuffle over the Disney incentive comes as the local Australian movie industry fights to preserve its toehold in the global marketplace. Data from Screen Australia, another government entity that supports the production economy, shows that 29 Australian films were made from July 2015 to June 2016, accounting for expenditures in the country of $194 million. Those figures were lower than the five-year average of 35 films made per year with expenditures of $235 million per year.

Lauren Carroll Harris, a film industry researcher at the University of New South Wales, acknowledged that there are positive aspects to incentivizing the likes of Disney to make movies in Australia. But she cautioned that giving subsidies to foreign companies may not offer long-term benefits.

“There are benefits, especially because the Australian film industry is not financially viable on its own terms,” she said. “There is a real need for jobs. But I think there is an understanding that those benefits can be short-term. Because what happens when ‘Pirates of the Caribbean’ packs off?”

Filming of the Walt Disney Studios production began in Queensland in early 2015. After incentives, the movie’s budget was slightly less than $250 million U.S., according to a person close to the project not authorized to comment publicly.  It is unknown what portion of the budget was spent in Australia.

In a statement made before filming started, Philip Steuer, then senior vice president of physical production at Walt Disney Studios, said that “Australia’s robust entertainment industry and many accomplished craftsmen will provide a fantastic home base for our production.”

The project soon was touched by controversy. In May 2015, the country’s agriculture minister accused the film’s star, Johnny Depp, and his then-wife, Amber Heard, of bringing their Yorkshire terriers into the country without the proper documentation. Heard eventually pleaded guilty to providing false information on her entrance papers and she and Depp later released a videotaped apology.

The making of the movie at Village Roadshow Studios in Gold Coast, Queensland, caught the attention of Boyd and others. By the start of production, it was already public knowledge that Disney had received $21.6 million from the federal government. The project was also eligible to receive additional money from the federal government in the form of a tax rebate, but it is not clear if Disney took advantage of this offering. A government representative declined to comment, saying the information was confidential.

The opaque nature of Australia’s incentive program, which has also been tapped by other U.S. studios, including 20th Century Fox, has sparked outrage among critics of the film subsidies.

“The issue is, do the largest media corporations in the U.S. actually need to be subsidized by Australian taxpayers?” Carroll Harris said. “Australians have a right to know that.”

That’s what prompted Boyd to make his filing under the Right to Information Act. In response to his initial 2015 request to the Department of the Premier and the Cabinet, Boyd received a one-page document about the Queensland deal, but a sentence related to the structure and value of the incentive was redacted, records show. He then applied to the Office of the Information Commissioner for an external review. In August, it issued a 39-page decision, authored by Right to Information Commissioner Clare Smith, declaring that the incentive details should be made public.

In her decision, Smith summarized submissions made by Disney, Screen Queensland and the Department of the Premier and the Cabinet to the Office of the Information Commissioner that argued in favor of keeping the subsidy details private. Generally, they said that disclosing the information would be a breach of confidence and reveal private information provided by Disney to the Queensland government.

But Smith rejected those arguments, and noted that the Australian federal government’s fiscal support of the film ($21.6 million) had already been publicized.

“Why this latter amount of — substantial — government assistance might be suitable for public dissemination, but the value of Queensland Government backing is information that Disney would be concerned to keep confidential … is not clear to me,” she wrote. “Decisions by government to transfer public wealth to private interests should, in my view, be attended by the highest possible levels of transparency and accountability.”

Within weeks, Screen Queensland appealed the decision. Disney, however, did not join in on the appeal. A ruling on the matter, now in the hands of the Queensland Civil and Administrative Tribunal, is expected early next year. Boyd said he was stunned that the issue has continued to escalate, but remains hopeful he will get the answer he began seeking more than a year ago.

“We just wanted to weigh out the costs versus the benefits they were telling us about,” Boyd said. “You aren’t going to come halfway across the world unless it is worth your while. We thought, ‘Well let’s just ask.’ We are quite amazed it has gone this far. We are just a small production company. It is literally David versus Goliath.”