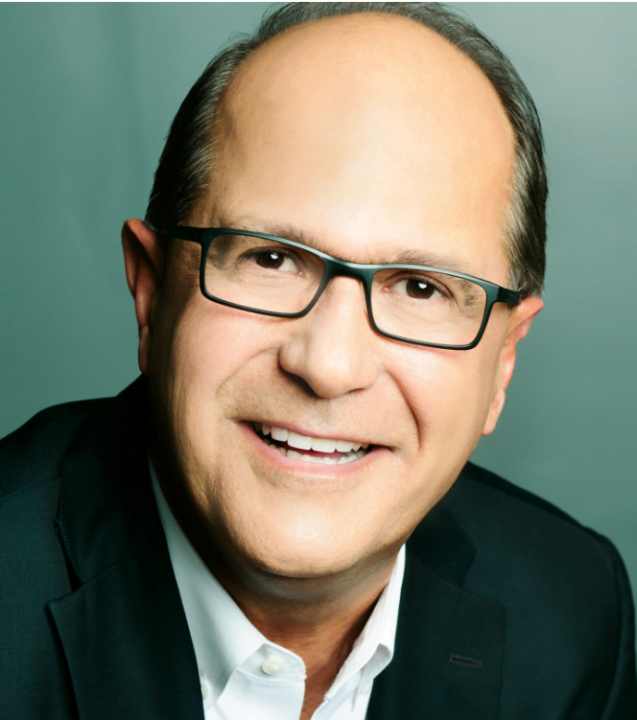 While Salesforce.com is known for “legitimizing” SaaS, Corent Technology is getting recognized for “democratizing” SaaS

Intel Inside. We’ve all seen its sticker on our PCs and laptops for decades but laypersons may not realize how that concept revolutionized the personal computing industry and beyond. Feyzi Fatehi, CEO of Aliso Viejo, California-based Corent Technology, contends the Intel Corp. “democratized” PCs with the invention of its processor that leveled the playing field for PC manufacturers for decades.

“Most people don’t realize that before Intel introduced their general-purpose line of processor chips, there was a massive barrier to building your own brand computers,” Fatehi says. “If not for Intel, Michael Dell and a number of other visionaries, would have not been able to make generations of PCs accessible to the general public at a consumer level price and create the personal-computer industry and its successors.”

Corent Technology is now doing the equivalent within the software industry with its platform that can convert virtually any enterprise software application to fully instrumented, scalable, efficient, and cost-effective Software as a Service (SaaS) almost instantly and without spending years and tens of millions of dollars in investment.

This has resulted in Corent Technology being named to Insight Success’ list of the 10 Most Disruptive Companies of 2018 and XploreIT’s list of Top 10 Cloud Technology Solution Providers in 2018.

Fatehi explains that the “Intel Inside” model was a decisive element that took the PC industry from “vertical integration” to “horizontal integration,” a model also known as “value chain.”

“Vertical integration happened when big computer companies used to build practically every component of their computers, including the processor, operating system and even the software applications that ran on them,” he says. “Once companies began specializing in specific components, most shifted to horizontal integration model. For example, there was no reason to spend years developing a new processor because Intel already did it for you, or for that matter building your own database did not make sense, since others like Oracle already built it for you and the list goes on…”

Fatehi studied the Intel Inside business model and technical disruption while getting his MBA at Santa Clara University and working for HP General Systems Division in Cupertino (the current site of the iconic new Apple headquarters), which led to the concept of attempting to replicate it for the software industry.

“Years later, we began asking colleagues if we could build the metaphorical equivalent of the Intel processor for the software of the future,” he says. “What if we created a pervasive platform to convert every software application to SaaS so every single SaaS provider won’t have to reinvent the wheel and build it themselves? What if we build it in a massively reusable, configurable, and customizable way so that everyone could use it. Many people thought we were out of our minds.”

In the early 2000s, Fatehi and his colleagues at Corent Tech began the journey that would eventually lead them down the path of delivering the “as-a-service” component of the software value chain. The technological breakthrough did not happen overnight. The company has worked for more than 12 years and has secured 77 patent claims so far contributing to what they call “Software Defined SaaS®” platform.

“I read about Thomas Edison failing over a thousand times before finally inventing the light bulb and thought we still had some room to go,” Fatehi says. “One time, in early days, we had to put aside virtually one year of R&D because we realized we were going into a dead end but you don’t know it’s a dead end until you make the turn. Then you come back and say, ‘Okay let’s learn the lessons and capture the experience and then invest it in your follow-on efforts without losing a beat.’”

Now Corent can convert virtually any software application to SaaS. Its product has been branded SurPaaS® and “Software Defined SaaS®.” SurPaaS also offers Cloud enablement in addition to the SaaS enablement component.

“Salesforce.com – the No. 1 SaaS provider – and other similar SaaS leaders have spent tens if not hundreds of millions of dollars to create their SaaS solutions and now we are removing the barriers to entry by offering it to everyone,” Fatehi says. “That is the disruption. With Corent’s Software Defined SaaS® platform, you can ‘define’ and configure your software application into a fully instrumented SaaS solution in few hours to few days without any programing.”

Another component of SurPaaS is what the company calls its “Cloudify” capabilities.

“In addition to SaaS enablement, we wanted to make sure applications run on the Cloud in an optimized, efficient way,” Fatehi says. “Conventional wisdom had been dictating that software applications not born on the Cloud would need to be thrown away and re-written from scratch in order to effectively work on the cloud. But the reality is that there are thousands of earlier products that are functional, operating and still highly valuable.”

To rebuild an application on the Cloud takes significant time and capital and besides the process has a high risk of quality assurance associated with it. But Corent can scan, analyze, migrate and optimize the non-Cloud environments to the Cloud almost seamlessly. This is its Migration as a Service offering also known as MaaS. 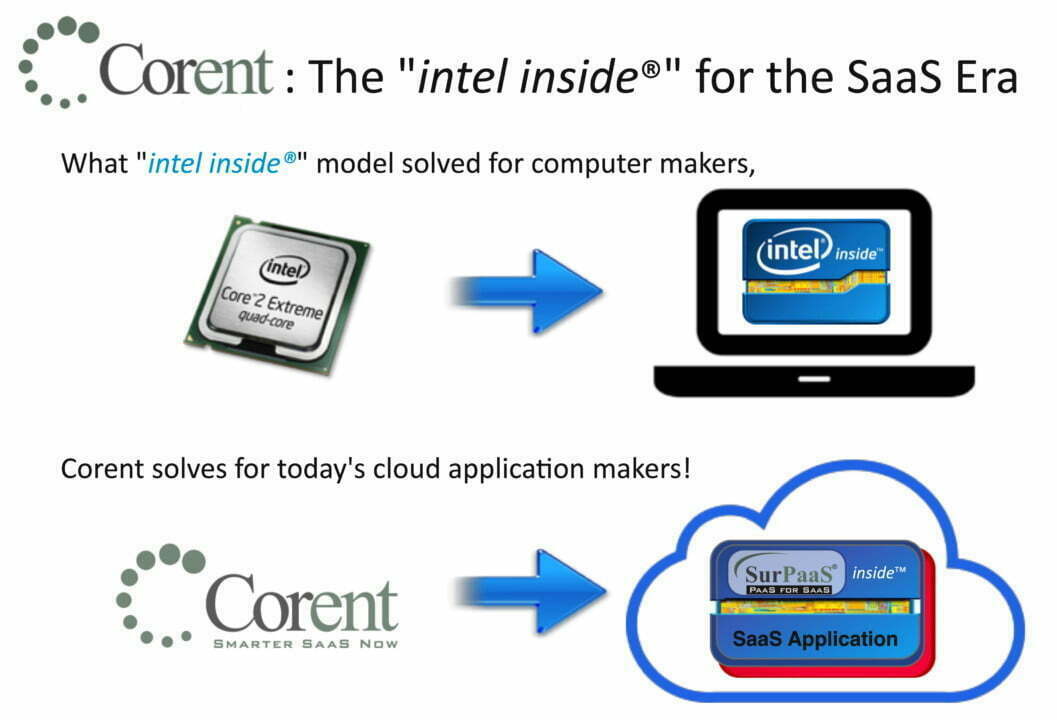 “There is a major industry growing up around migration technology and Corent is getting recognized as the most-complete and capable Cloud migration platform available in the market,” Fatehi says. “Corent is unique in offering an end-to-end, consistent, fully integrated platform to analyze, migrate, optimize, modernize, and manage software on the Cloud. As part of modernization, applications can be ‘containerized’ and start using micro services, PaaS enabled and of course SaaS enabled all with highest degrees of automation as part of supporting the customers Cloud migration journey including optional optimization on an on-going basis.”

As an example of the global impact the democratization of SaaS can have, Fatehi points to one of its most recent partnerships, the Mifos Initiative. It resulted into a SaaS-enabled Mifos X – a software application that could potentially provide banking services to more than three billion people in the developing world; something they’ve never had access to before.

Mifos is an iconic open-source software application created to bring banking services to those with little or no access, one of the key reasons for extreme poverty in the world. The application was created with the support of IBM, Vmware, Microsoft Foundation, HP, Cisco but it wasn’t made SaaS.

Corent has now converted it so microfinance organizations in small or remote towns or regions won’t have to rely on a local Managed Service Provider (MSP) to host and manage it for them. It is available on a global scale to any institution that wants to offer the service and anyone with a phone with internet connection can access it. Local resources can then concentrate on advising institutions, how to best configure it and use it to address their needs instead of dealing with the plumbing of hosting and upgrading, etc. “And the beauty is, everybody wins,” Fatehi says.

The Next Phase: OpenSaaS™ Initiative

Corent is now taking the next leap in this democratization revolution with a new industry wide venture called the OpenSaaS™ Initiative, which is still in its early stages.

“We began researching how many open-source software applications were actually being used by the Fortune 1000,” he says. “We thought maybe a couple hundred, but it turns out there are more than 1,200 and only a small fraction of them are being offered as SaaS let alone credible, efficient, scalable SaaS. 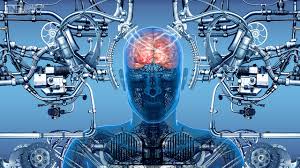 The idea behind the OpenSaaS initiative is to begin with 10 popular ones that are not already offered as SaaS and convert them to SaaS in conjunction with a major Cloud vendor and/or Managed Service Provider. The evidence shows that the project can create more than $1 billion in new annually recurring revenue within the next two to three years to benefit all stakeholders including the developers and support providers of the Open Source application. “It is not a zero-sum game. We are simply expanding the size of the pie for all involved,” Fatehi says.

He has shared this concept with a handful of industry leaders asking them to objectively analyze the logic. So far, no one has found any flaws in the concept other than saying it may be closer to two or three years than the originally stipulated one year to achieve the predicted $1B annual recurring revenue – “but it can definitely work as a viable, yet disruptive business model,” Fatehi says.

The generated proceeds will benefit all involved, top to bottom from end users to developers, to Cloud providers, to Managed Service Providers. Some of these applications are already making healthcare, education, transportation, banking and all sort of other organizations more effective; Imagine, if they can benefit millions more in a highly efficient manner.

“National research labs such as Los Alamos, JPL, and NASA have created thousands of incredible software applications and, because they’re federally funded by tax dollars, many of them can be released as Open Source Software,” Fatehi says. “Incredible technologies have been developed but are then put on the shelf mainly because they cannot be delivered as efficient, secure, reliable, cost-effective, and easy to manage SaaS. No problem. We can rapidly convert them to SaaS. The potential is massively tremendous.”

The ultimate potential for Corent’s SaaS-enablement technology and OpenSaaS™ Initiative is limitless and can benefit everyone from the software developer to the end user. Developers will have the means to bring their products to market without raising millions in capital and the smaller organizations and businesses will have access to software applications only previously available on an enterprise level. In other words, Corent’s SurPaaS platform – along with a strong coalition of top tier thought leader industry partners – are about to “democratize SaaS.” 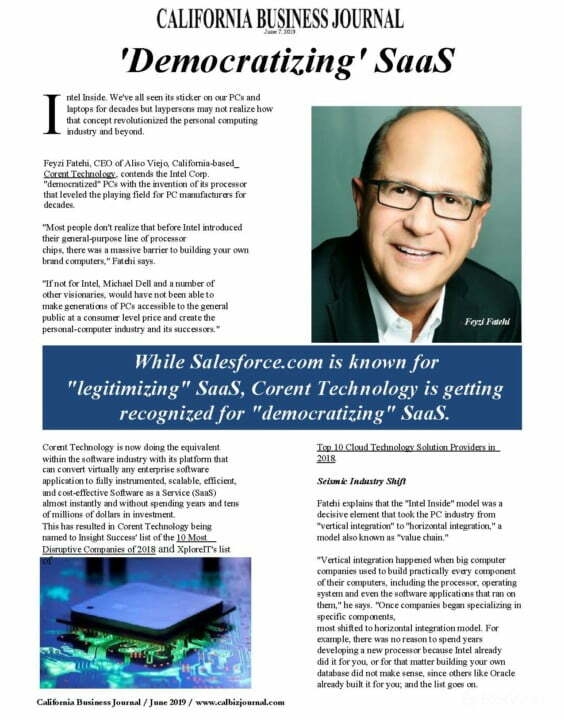 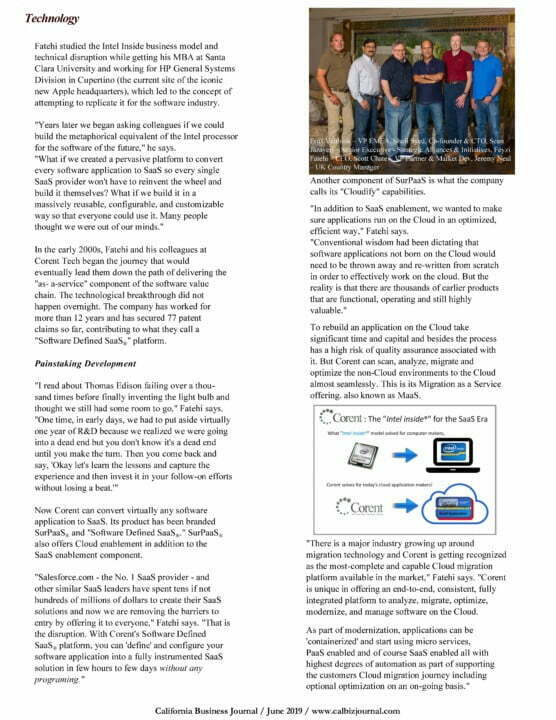 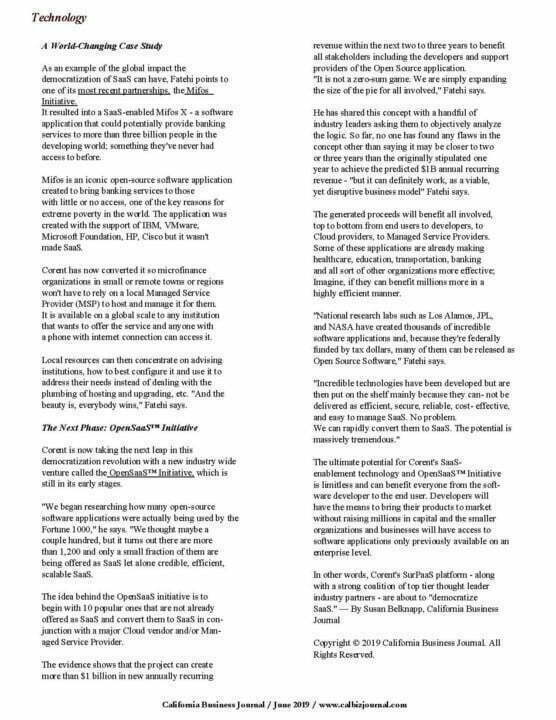