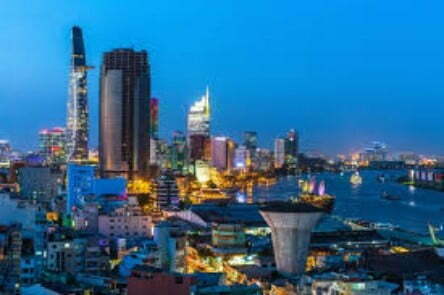 RealStake has created a platform that provides access and gains in high-return real estate assets and shares in private companies.

It was a relatively simple essay question on a business school application but James Vuong spent three months hiding out in a local Starbucks, writing, reflecting and rewriting in order to answer it truthfully. The question was “What matters most to you, and why?” He finally concluded that what he wanted most out of life was to make an impact, specifically giving people access to opportunities.

That was over 15 years ago. Since then, he’s been making an impact in his country of birth, Vietnam, by investing in capital-hungry startups and by helping non-traditional investors – those who aren’t considered high net worth individuals – to break into the private equity and real estate asset classes. He calls it “democratizing finance” and it’s the cornerstone of his new startup, RealStake, a platform that allows people to gain access to private equity and real estate investment opportunities.

Twelve-year-old Vuong and his family were among the nearly two million refugees who came to the U.S. in the 20-year period following the end of the Vietnam War. They landed in Alhambra, California, where his father worked as a store clerk, his mom sick at home; they lived in a small rental, and drove a $500 car that was too rundown to take on the freeway.

When Vuong entered the end of 7th grade, he spoke no English and had never attended school before, not even in Vietnam. But within 5½ years, he learned English, excelled in his math and science classes, and was accepted to the University of California at Berkeley, where he studied electrical engineering and computer science. After graduating, he worked as a chip hardware / logic designer in Silicon Valley for several years before going back to Berkeley to get his MBA. In 2008, he returned to Vietnam where he was VP of Investment and a Kaufman Fellow at IDG Ventures — it was only 30 years after he and his family had left as refugees.

For Vuong, investing in a startup where the team was living off ramen noodles and working out of one small room in someone’s house was a wonderful experience. “Venture capital in a way is also helping people fulfill their quote unquote American dream, because very seldom in history do you see the regular person who, based on their talent alone, can create a billion-dollar company,” Vuong says. “There are these upstarts…men and women who are not even well-capitalized or from rich families, and they can take down the biggest companies. That is the really nice motivation behind doing venture capital. Especially in emerging markets.”

IDG Ventures was the first venture capital firm to work in Vietnam, and there wasn’t even a direct translation for the term “venture capital.”

(Editor’s Note: Foreign nationals are allowed to buy and own apartments and condos; however there is a 30% quota limit on new developments. For example, if a new development has 100 units, only 30 units max can be sold to foreigners.)

“We actually had to coin the term,” Vuong says. “‘Venture capital’ was literally translated to ‘high risk investment’ and so then people would be asking, ‘If it’s so risky, why are you investing?’ and we would say, ‘That’s the beauty of it, we’re funding 20 companies that have the potential to be so big that, if one succeeds, it can return more than 30 times. It is very compelling to help a small team to go from a nobody to being able to build something that will build a market and also be very innovative. So in a way, venture capital is bringing opportunity to the little guy.”

Vuong kept recalling the lines in The Great Gatsby: “Just remember that all the people in this world haven’t had the advantages that you’ve had.”

“I have cousins and friends who are really smart and super hard-working. Because they have not been given the same opportunities being in the U.S., there’s a huge gap in what I’m able to do compared to them,” Vuong says. “So that’s always something that’s been in the back of my mind, that given the opportunity, people will always do much better.”

While Southeast Asia as a region is growing rapidly with real estate property prices sky rocketing, especially in the up and coming metropolitans, only a small group of investors and developers are the beneficiaries and the majority of the people can’t participate due to very high minimum investment amount and high mortgage rate from the banks.

GDP and GDP per capital growth of these ASEAN countries have been very strong, with for example, Vietnam clocking in around 7% per year for many years. Many companies in the region, including startups, have been growing rapidly yet most of them are not publicly listed.  Here again, in the private equity asset class, the number of people participating and receiving the enormous value being created are limited to a small number of owners and investors.  Employees and those not involved with these high growth companies are left out in the cold.

Seeing the need to bring access to investment opportunities in the two asset classes above, Vuong decided to start RealStake, which is based out of Singapore to serve different markets in Southeast Asia. RealStake creates a platform that enables invesotrs to access and gain a “real stake” in high return assets in Southeast Asia, specifically real estate and shares in private companies in the region.

Access to opportunity is not the first thing we think of when it comes to fundamental human rights, but for Vuong it’s a reflection of his life’s journey, from being an immigrant in America whose family had zero capital to purchase a reliable car, to business school grad, investor and venture capitalist. “If society is to be fair,” he says, “then the masses need to be given access and equal opportunities to investment.” 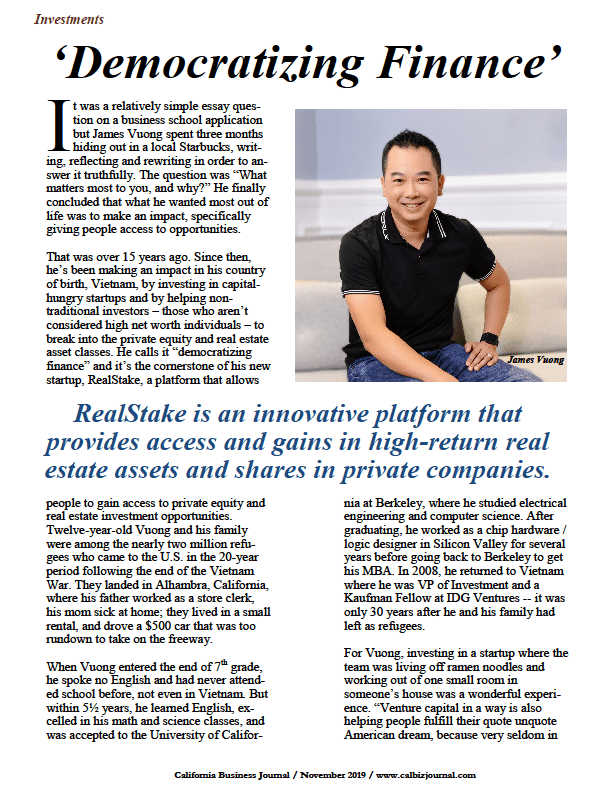 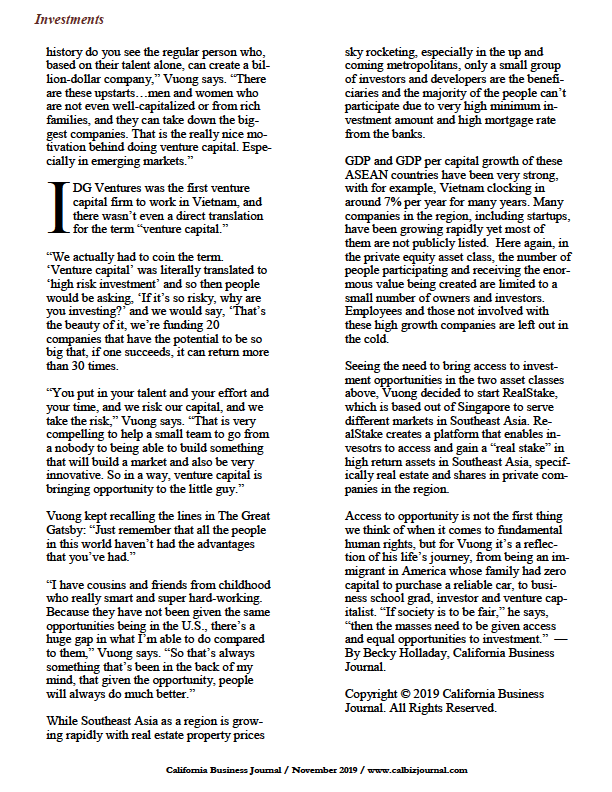