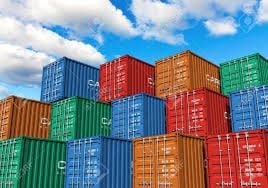 Long Beach businessmen Blake Christian and Bijan Noori partner in hopes of solving a piece of the affordable housing puzzle.

Shipping containers – though you may not realize, they’re everywhere.

They’re stacked on every freighter that docks in an American port and they’re then loaded onto almost every semi we see on the road. There are tens of millions in use and millions more in existence. Could these simple, solid, durable containers be the solution to the affordable-housing issue that plagues cities throughout the United States?

This duo has built a state-of-the art, solar-powered, off-grid, two-bedroom prototype and share a concept that could be the solution to a number of housing dilemmas, from seasonal workforces to the homeless.

It began when Christian – who works and lives in Long Beach, California, and Park City, Utah – would gaze out his office window at the busy Port of Long Beach. Musing about the massive volume of shipping containers that pass through the port every day, he wondered if they couldn’t be put to use in ways other than moving goods from one place to another. He thought there must be millions in existence, past their shipping prime.

“My wife and I go to Japan every few years,” he says, “and some of the larger cities there have taken micro-living to a whole new level, such as sleeping pods, which are also known as ‘capsule hotels.’ That concept was the impetus for this idea. I thought there might be a way to convert these ubiquitous metal boxes into usable, and moveable, living space.”

He shared his vision with Noori, another Long Beach businessman who immediately saw the value, and together they began to brainstorm about the best possible way to develop the concept.

“I just wanted to be a part of it,” Noori says. “I loved the idea from the beginning and knew it had the potential to solve so many different problems if properly executed. It was going to take a lot of work and creativity but I wanted to be involved.”

Inspiration was finally spurred to action when Christian moved his family to Park City, Utah, five and a half years ago.

“Every time I opened the local paper, the lead story was about the seasonal workforce housing shortage,” he says. “It took some time before I realized the converted-shipping container concept I was musing about in Long Beach could work perfectly for the issues plaguing Park City.”

Park City, a town renowned for its luxury ski resorts, is certainly not unique on its reliance of an influx of seasonal workers to cater to the tourism that surges in winter. Currently, the city relies on homeowners to rent out spare rooms to help house the population but that option is still fraught with issues, including daily travel to the resorts.

“At the beginning of each ski season the city and resorts schedule ‘speed dating’ type events where homeowners with a spare room or converted basement meet the flood of laborers coming to work at the resorts – many from other countries,” Christian says. “This can put a roof over their heads but the house might be a mile from a bus route, so it’s not always a feasible location.”

The rise of Airbnb and other vacation-rental services has also stressed the already tenuous system of available housing during the prime-time winters.

“Now, people can rent their rooms a few days a month at a much higher rate,” Christian says. “That’s a much more attractive option than having someone living there for four or five months of the year.”

Christian and Noori decided it was finally time to take the plunge and develop a prototype for their container living unit. They enlisted the help of two Salt Lake City builders to handle various parts of the process. (Shipping containers have been repurposed for a variety of uses for quite some time, including eco-conscious homes.)

Christian and Noori’s vision, however, was to develop a community of converted containers that were specially designed to house seasonal workers in net-zero homes that could house as many as four people each and offer modern layouts, sustainability, and hyper-efficient use of space. The duo is currently working with landscape designers to create an aesthetically pleasing community that includes common areas such as a pool and clubhouse.

The prototype, which is powered by a state-of-the-art solar-energy system, and an insulation barrier close to R35, also has a composting, biodegradable toilet. The unit was extremely well received in Park City to the point that plans to bring it to California had to be delayed because the governor of Utah requested it be displayed at his annual environmental summit for an audience of about 1,500.

Next steps involve continuing to discuss zoning and location options with Park City officials. This Summer the prototype and a VIP oriented “green room” container will be used over a 4-month period for an outdoor concert series to accommodate the performing artists and the various technical support team.  The mobility and design flexibility of the containers was a huge selling point.

“We have three different avenues when it comes to permits and zoning laws,” Christian says. “Getting the land zoned to allow containerized homes can take three to five years, which doesn’t help the immediate need. There are some cities that already allow for these homes and we think more will add them in the coming years. We might also qualify under city and county experimental building provisions or we can get a conditional-use permit for a set amount of time to allow communities to test them. New York City is currently adopting modular home concepts.”

Christian and Noori are confident they’ll find the solution for the Park City workforce housing issue and from there, they see their container homes serving countless uses that range from homeless housing to VIP green rooms for events such as concerts and even the Olympics. Of course, there are hundreds of other cities with seasonal tourism that face the same struggles as Park City.

“The options really are endless,” Noori says. “We’re not claiming we have the ultimate solution for these far-reaching issues, but we truly believe we have a valuable piece of the puzzle that can be instrumental in solving them.”

This has been a true partnership with both participating in all aspects of the development and soon, implementation.

“We both do everything, from A to Z,” Noori says. “Whether it’s tweaking floor plans and design elements, finding new materials and components, negotiating prices, or doing outreach to government officials, we’re both working on all aspects and searching for solutions.”