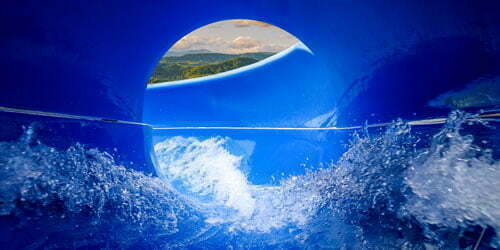 Water Pigeon Inc. is transforming traditional standards for monitoring water usage in a way that has never been done before.

Sarp Sekeroglu is charting his own course in the water world of the West. After earning an environmental engineering degree from Middle East Technical University in his native Turkey, he enrolled at San Diego State University, where he received a master’s degree in civil engineering.

Sekeroglu, who grew up in Adana, spent the next 10 years as a project manager in the San Diego office of RBF Consulting, overseeing projects in seawater desalination, water treatment, reservoir design and wastewater collection systems. He left RBF in 2014 — three years after the Irvine-based company was acquired in a $50 million cash and stock deal by Michael Baker Corp. — to launch his own consulting firm.

His work for the City of San Diego illuminated an unfulfilled demand in the market that will help utilities — and their customers — while generating rippling effects on the environment, conservation and sustainability.

“From that experience, I realized there was a need for automating meter readings and generating data from that,” Sekeroglu says.

Then one day it hit him: “We could do this with optics,” he remembers thinking to himself. “We can literally read the meters with a camera and it wouldn’t interfere with utility operations.”

The task — though it sounds rather simple — proved too cumbersome, labor intensive, costly and time consuming for utilities to tackle.

“The difficulty of getting utilities to implement traditional automated meter systems cannot be understated,” he says.

The goal was to create an ultra-adaptable and affordable solution that utilities can apply to automate meter reading and water consumption data generation. Sekeroglu pitched the idea at StartUp Week San Diego in 2015 and it took second place. That led to an invitation and selection at EvoNexus, a leading tech incubator in California with hubs in San Diego, Orange County and Silicon Valley.

Shortly thereafter, Water Pigeon Inc. was born — and it quickly had wings. Its first prototype, which received a patent, placed a camera into the lid of the meter. The design drew raves from the San Diego County Water Authority, which set up pilots with the Valley Center Municipal Water District and the cities of Oceanside, Escondido and Del Mar.

The pilot, which aimed to prove the revolutionary technology could read meters and provide data, helped the company attract angel investors, who backed a $700,000 pre-seed round.

“We took all that input from the pilot and put it into a second-generation prototype,” Sekeroglu says.

The improved battery-charged model, which attaches to the meter face and transmits images and readings to the utility via the cloud using existing cellular networks, went into pilots last year in Central Valley, Escondido, Oceanside and the Santa Margarita Water District.

“More than 75% of the meters in the country are read less than once a month,” Sekeroglu says. “The meter readings can cost utilities as much as $700 in man hours per visit and are primarily used to prepare water bills. When we analyzed our granular data, it led to substantial savings in treating, pumping and moving water, as well as trimming operational costs, with less vehicles on the road and fewer workers in the field.”

Sekeroglu has 200 units in the ground, generating more than 2,000 data points a day. “There are all kinds of benefits to utilities,” he says.

For consumers, the data provides invaluable insights into consumption behavior and potential problems like leaks. The data collect is anonymized, so it doesn’t track back to a specific, known customer but just to a meter number.

During its second round of pilots, Water Pigeon was accepted into the Bay Area accelerator Imagine H2O. Here, the company was introduced to the Contra-Costa Sanitary District, which became its first paying customer. Water Pigeon has deployed its system on 10 meters with plans to add more.

Under its flexible business model, Water Pigeon charges utilities a flat fee per unit and a service fee per meter. Some utilities prefer a lease model with zero money down and a monthly subscription based on length of the contract and deployments.

Water Pigeon has grown its customer count to 12, including Santa Margarita Water District, East Orange County Water District, San Antonio Water System and some federal prisons. It is set to add another three customers this month.

The San Antonio contract will add 150 units to its expanding network with an eight-year option to extend the deal and add another 850 units. The company is schedule to deploy 1,500 units in January.

Water Pigeon projects to book $400,000 in revenue this year, and by the end of next year turn cash-flow positive, a major milestone for any startup. By then, it forecasts to have annual revenue exceeding $1M and monthly recurring revenue exceeding $30K.

The company, which employs five full-time workers, has raised $2 million from angels through convertible notes.

Water Pigeon is planning its first equity round next year, aiming to raise $2.5 million that is earmarked to optimize features, boost hiring, and improve data analysis and AI algorithms in water consumption and leak detection.

“With this raise, we want to bring the core competencies into the company,” says Sekeroglu says. “Our vision is having more than two million units installed in five years. “The world,” he adds, “is going to understand the importance of our most precious resource water more and more.” 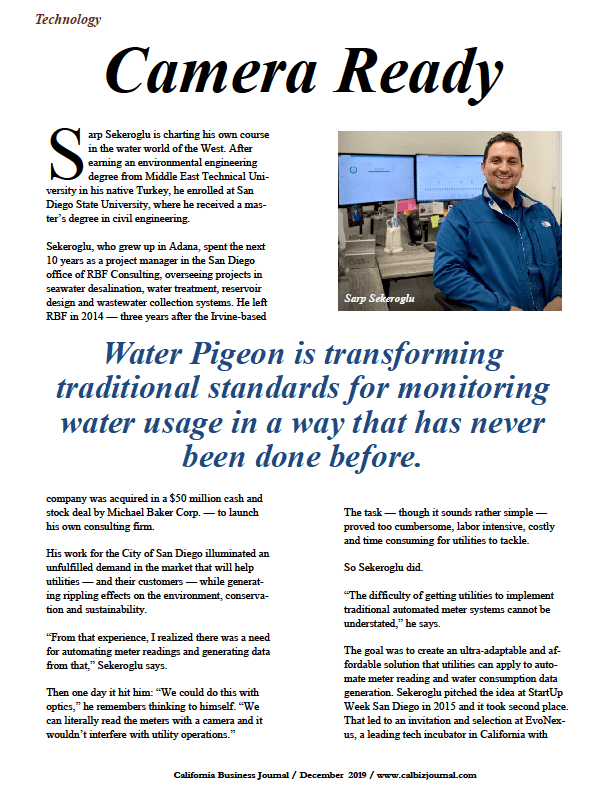 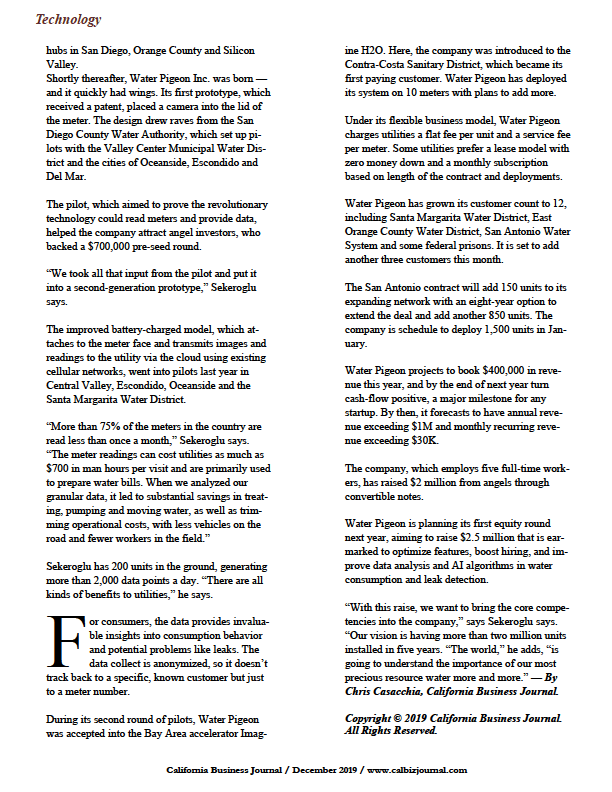 How to Know if Your Tap Water is Safe To Drink