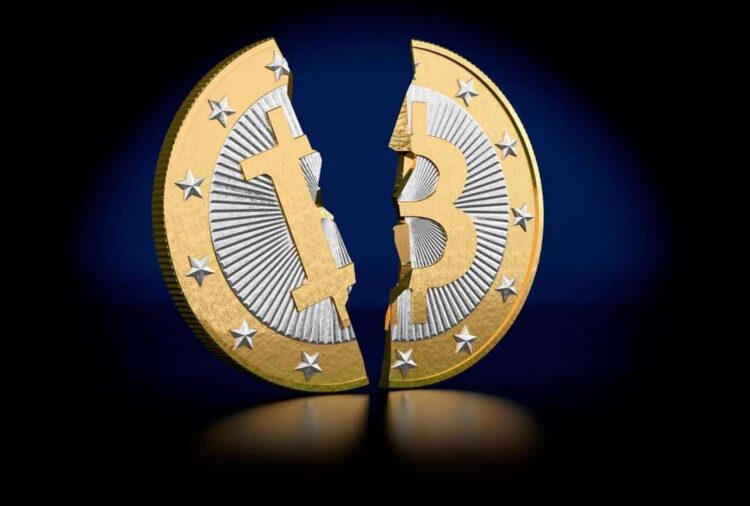 The next Bitcoin halving is supposed to happen in April 2024 and could impact the coin’s price dramatically. For newbies who just invested in Bitcoin and don’t know what Bitcoin halving is, this article is for you. Let’s start from the beginning, shall we?

What is Bitcoin Halving?

Bitcoin halving is an event where the mining reward is halved. This means that when miners mine Bitcoin and add new blocks to the blockchain, they will get 50 percent fewer Bitcoins for their efforts. Bitcoin halving dates are anticipated to happen once every four years when 210,000 blocks are added until the maximum supply of 21 Bitcoins is generated by the network.

Bitcoin halving is considered an important event for traders as it reduces the number of new Bitcoins minted by the network. This restricts the supply of new coins, and it might increase the price if the demand stays strong.

This mostly happens months before and after halvings; the circumstances for each halving are different, and it can lead to wild BTC price fluctuations.

How Does Bitcoin Halving Work?

Bitcoin halving works with the help of the network’s fundamental blockchain software, which commands the rate of newly created Bitcoins. The software needs computers (used by miners) to compete to validate transactions.

The software then rewards them with freshly minted Bitcoins when they provide proof that the transactions have been verified. When 210,000 blocks are added, the blockchain is programmed to halve the rewards.

The Importance of the Bitcoin Block Halving

The halving process reduces the number of new Bitcoins generated per block, meaning Bitcoin supply gets lower, and it makes buying BTC expensive. Usually, lower supply with stable demand leads to higher prices. Since halving reduces the supply and demand stays stable, the halving will precede some of Bitcoin’s largest runs.

Now that we know about Bitcoin halving, it is important to remember that Bitcoin Halving is scheduled as per block height and not date. As we’ve already established, BTC halving occurs every 210,000 blocks, but in 2024, the halving will take place on block 840,000.

What Happens After Bitcoin is Halved?

After the second halving in 2016, Bitcoin rewards were reduced from 25 new BTC to 12.5 new BTC. Bitcoin’s value increased from $576 (a month before halving) to $650 during the event. Over the course of the year, the price of Bitcoin continued to increase and reached $2526 in July 2017.

The same pattern was noticed during the first halving in 2012 when the rewards dropped from 50 to 25 new BTC. Bitcoins were priced at $11 a month prior to halving, but on the day of the event, the price increased to $12. The prices continued to rise over the year and reached $1038 in November 2013.

Nothing can be concretely said about the impact of the halving on Bitcoin’s price. However, many experts believe that it will follow the same pattern as the last two halves and increase in value because of increased news coverage.

One thing to keep in mind is that the prices of Bitcoin will be affected by its demand shaped over the course of the halving. There is no certainty that the prices will rise or even stay the same because the market has matured since the last halving.

Bitcoin Halving is process coded in the blockchain, and as soon the criterion is met, the halving process begins. This time the rewards are scheduled to drop to 3.125 from 6.25 BTC, and it is about to become tough for miners to mine Bitcoin and make a profit unless Bitcoin’s prices increase dramatically.

1. What date is the next Bitcoin halving?

The upcoming Bitcoin halving is scheduled to take place in April 2024. After this halving, the rewards for adding one block on the blockchain will reduce from 6.25 Bitcoin to 3.125 Bitcoin.

2. How many Bitcoin Halvings are left?

A block is added to the blockchain in about 10 minutes, and due to this, halvings take place about every 4 years. There are a total of 64 halvings, and after that, there will be no Bitcoins left to give as rewards to miners, and all the Bitcoins will be in circulation. The last halving is scheduled to take place in 2140.

3. Is Bitcoin halving every 4 years?

Yes, Bitcoin halving occurs roughly every 4 years or after every 210,000 blocks are mined. After that, the block reward is reduced to half.

Bitcoin's Emergence as a Primary Currency

Bitcoin's Emergence as a Primary Currency