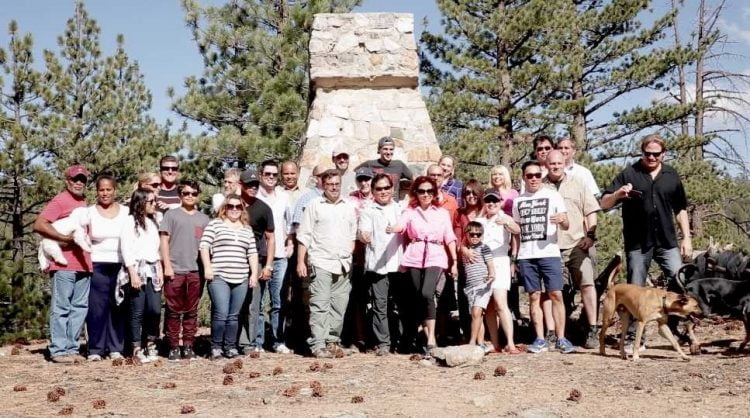 THE CARAVAN OF 10 LAND ROVERS SPED ALONG THE HIGHWAY, one after another, in perfect and colorful syncopation, drawing the attention of other drivers and passengers along the 91 Freeway in Orange County, California.

“I love this,” Jay Allen says with a smile. “Whenever people see a convoy of Land Rovers, they wonder, ‘Where are they going? They must be on their way to do something fun.’”

Exactly right. This parade of Land Rovers is on its way to Big Bear for a wild and wholly 26-mile off-road adventure on some of the region’s most rugged and challenging terrain. Land Rover Anaheim Hills put the event together for a select group of customers to illustrate the extraordinary and unique capabilities of Land Rovers on rocky and hilly terrain.

Allen, the Parts Manager of Land Rover Anaheim Hills and its most avid off-road adventurer, coordinated the one-day journey. The previous week, he was in England being honored as one of Land Rover’s top performing managers. While he was away, he was finalizing arrangements for today’s off-road event.

When Allen heard that Southern California had been hit with a wild heat wave and flash flood warnings, he didn’t fret.

“Not heat, rain or snow stops a Land Rover off-roader,” he told the group of 18 off-road adventurists before departing from the Anaheim Hills dealership. “If this was Toyota, yes, cancel the event. Nothing stops Land Rover.”

He went on to say, “We’re here to only have fun and show you the extraordinary capabilities of your vehicles. If you weren’t here today, I’d be going off-roading myself. This is what we do here at Land Rover Anaheim Hills. When you see our Land Rovers, you’ll see all the scratches, dents and bumps. Off-roading is not a passing interest with us here. This is what we do. We’re very passionate about the vehicle and what you can do in them off-roading.”

With that, the entourage departs for its two-hour trek to majestic Big Bear to explore the ridges, canyons, meadows, streams, rivers and historic gold rush sites of the beautiful San Bernardino Mountains – as well as off-road obstacles such as steep ascents, descents, side-tilts, log crossings, creek crossings, rock crawls, and boulders, creating an exciting and memorable off-road adventure.

The 10 Land Rovers on this glorious Southern California morning are led by Darrin Simmons, who works with Allen and is his equal as an off-road enthusiast. Allen is the middle man in the convoy and Rich Guzman, another one of Allen’s off-road friends, is the tail gunner.

As the sun sneaks between the San Ana Mountains, creating an amazing spotlight and silhouette affect, the convoy hits a slight bottleneck of traffic.

“This is what our bumpers are for,” Simmons jokingly says via ham radio, prompting Allen to laugh.

About one hour into the drive, the procession of Rovers heads into the stately San Bernardino Mountains with its spectacular views of trees, rock formations and mountains.

Allen and Simmons completed a pre-run of the route a few weeks earlier. They decided on a course featuring a mix of challenging spots along a wonderful scenic route.

“We wanted to make it fun and a little challenging – but not too intimidating or tricky,” Allen says. “It might have been too much for the first timers.”

One of the courses Allen considered features two massive boulders with only a few inches of clearance on each side.

“That would have been too much of a squeeze for the Range Rover Evoques, so we decided against it.”

Moments later, the convoy of Land Rovers pulls into Big Bear, where Ed Testa, another experienced and enthusiastic Land Rover off-roader, provides the group with tips to handle their vehicles through the rugged terrain.

“Your Land Rovers are amazing vehicles,” he says. “They can go anywhere. My car is proof of it,” he adds, nodding to his classic Land Rover Discovery. “Just look at those bruises,” he says with a proud smile.

Testa warns the group that when they’re elevating up some of the more challenging climbs and obstacles, “Keep your foot on the accelerator – don’t let up and don’t hit the brakes.”

He reminds everyone to keep their eyes on the cars in front of them – “Watch how they maneuver the terrain and follow suit.”

“I’m really excited to see the capabilities of this car,” says Benny Wong, an owner of two 2014 Land Rovers. “I’ve been waiting for this for a while.”

“Very smooth ride,” Wong says as he navigates the rocky terrain as we head toward Gold Mountain, an old sealed mine overlooking Baldwin Lake. “I expected it to be smooth, but not this smooth. It’s almost like I’m driving on pavement.”

At Gold Mountain, the participants experience a scintillating view of the scene and majestic topography.

Two of the more interesting characters on the excursion are Chad Downey and Tom Leueck. At first glance, observers assumed they were father and son. After all, Downey is 39 and Leueck is 83.

Yet they met sailing years ago and have been friends ever since.

With these two, the comedic lines just keep on coming, one after another, in rapid fire, all afternoon.

Downey is perhaps the most aggressive driver of the group, taking the toughest angles on every ascent, descent, side-tilt and water crossing. He flies through each water crossing, determined to come out of the crowd with the filthiest vehicle, a goal he easily achieved.

Downey’s previous vehicle was a Lexus SUV. The one before was a Mercedes AMG. He’s so impressed with every aspect of his Land Rover, Downey says, “I can see this being my first repeat car.”

“I never thought I could ever drive this fast over rocks,” Wong says. “And I’m in normal driving mode.”

The next portion of the rugged land requires some extra traction so the Land Rover drivers engage their vehicle’s “sand and gravel” mode.

“Still incredibly smooth,” Larry Hayes says. “Nothing jarring at all.”

The most challenging portion of the day’s adventure followed lunch: a 17-degree uphill climb over ground covered with rocks and boulders.

“Keep a steady throttle,” Testa tells the group of off-roaders. “Keep your foot on the gas. If you let up, problems occur.” 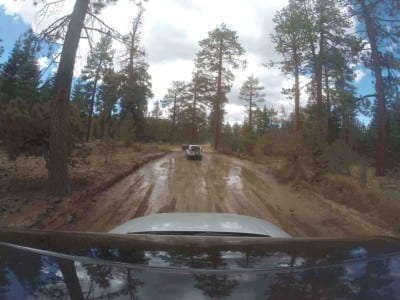 The drivers switch to “rock climbing” mode and begin the ascent.

One after another, the Rovers climb toward the heavens, some spinning their wheels, some making it look quite easy.

Debra Hayes was among the latter – and her husband left her alone in the vehicle to do it by herself.

“She’s tough – she can handle it,” Larry says moments before Debra heads uphill.

Despite her “toughness,” Debra looks a bit uneasy as she makes the hike uphill, bouncing from left to right over rocks and boulders. Yet she keeps the power steady and makes it to the top, amidst a roaring ovation by the crowd, including her husband, who was videotaping the drama.

“I’ve never done anything like that before,” Debra says. “My adrenalin was really going. I just kept thinking, ‘Let me get up this hill.’ Your first instinct is to take your foot off the gas, but I kept saying, ‘Don’t do it. Keep it steady’”

Mike and Laura Sullivan made it uphill without a hitch as well.

“It was awesome,” Laura says. “It was like we were being pulled uphill by an invisible rope. It was unforgettable.”

Ruben Quezada wasn’t as fortunate. With his wife and children watching from atop, Ruben let up on the accelerator and was spinning his wheels. He eventually reached the top, but with a little coaching from the Land Rover Anaheim Hills staff.

“It was my first time doing it and it was really exciting,” he says. “I knew I’d make it but yeah, I did let up on the throttle. Big mistake. But it was a great experience.”

Following the intense uphill obstacle, it was home free for the group.