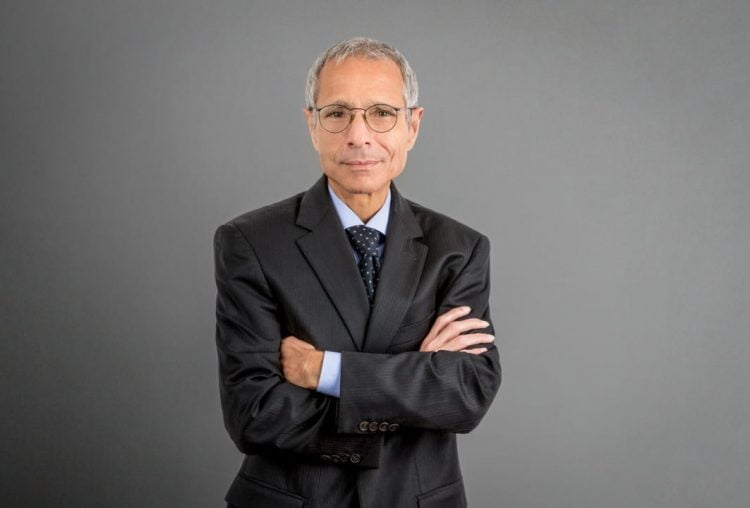 Michael Ahmadshahi is considered to be among the best and most thorough Intellectual Property attorneys because of his first-hand experience and knowledge in researching, writing and filing patents.

If you have an invention or idea worth patenting, you naturally would want to consult with an Intellectual Property (IP) attorney at some point in the process, preferably in the beginning.

The ideal scenario would be to find an IP attorney who owns his own patents.

Unfortunately, there’s not too many of them.

But Michael Ahmadshahi is one of them.

And he doesn’t just own one patent. Or two.

“In my 15 years as a lawyer, I’ve never met an IP attorney – or any other attorney — who owns a patent,” Ahmadshahi says. “It’s very rare.”

The Irvine, California-based counselor is considered to be among the best in his profession because of his all-around, first-hand experience and knowledge in researching, writing and filing patents.

In fact, there is a good chance you may be hearing about Ahmadshahi’s primary patent sometime in the near future. It’s a cell phone app called Textolla, an inventive application that may truly become one of the most popular in the marketplace.

With Textolla, an individual types in a text, which is then converted into audio. Then you choose an animated character – including celebrities – to deliver the text.

There are millions of options – from actors like Brad Pitt and Julie Roberts to musicians like Paul McCartney and Mick Jagger. Or athletes like Tom Brady and LeBron James.

If you’re thinking about the legalities of such an app, well — it’s legal because it is protected under first amendment law.

“No one can use Clint Eastwood’s actual voice but they can use someone mimicking or imitating him and they can use an image of him as well because it’s a parody,” Ahmadshahi says.

From a legal perspective, parody is the key word because “parody is the exception to right of publicity, making it available for public and commercial use,” Ahmadshahi says.

Ahmadshahi envisions he is going to experience huge success with the app.

“Absolutely — I think it’s going to be smashing success,” he says.

Just like his law practice, which happens to be his “second career.”

He was originally the lead scientist for C.E. Niehoff & Company in Chicago for almost a decade. The firm is a defense contractor that manufactures state-of-the-art generators for military vehicles. When the company wanted to file one of its first patent utilizing microcontrollers, the VP of engineering tapped Ahmadshahi as the one to head up the project.

During the interview process, Ahmadshahi thought to himself, “Hey, I can do this. I could be a patent attorney.”

The year was 1995. He was 35 years old and equipped with a Ph.D. in Aerospace Engineering, as well as a Masters and a Bachelors. He loved working as a scientist, especially for C.E. Niehoff, but during the final year of his seven-year tenure with the firm, “I became a little bored,” he admits. “There were days I’d walk the halls thinking, ‘I can do my job in one hour – why am I here for eight hours.’ There were multiple staff meetings and all the other things that happen during the course of the day.”

Then, when he met with the company’s patent attorney, “I was just so impressed with him and his style,” Ahmadshahi says. “That was the moment I looked into the future and I just felt it was time to start thinking about making a transition into a second career.”

Several years later, after perfecting his patent-writing skills and his overall knowledge of patents, he left Chicago for law school in California at Western State University College of Law. He passed the bar in 2002 and became a partner at Law Offices of Kayhan S. Shakib in Los Angeles, a litigation firm.

One year later, he went off on his own, launching his own individual practice in November 2003.

Besides IP, Ahmadshahi also specializes in corporate law, including the procurement and licensing of patents, trademarks, and copyrights. He also litigates infringement, invalidity, trade secrets, and unfair competition as well as corporate and business matters before federal and state courts. 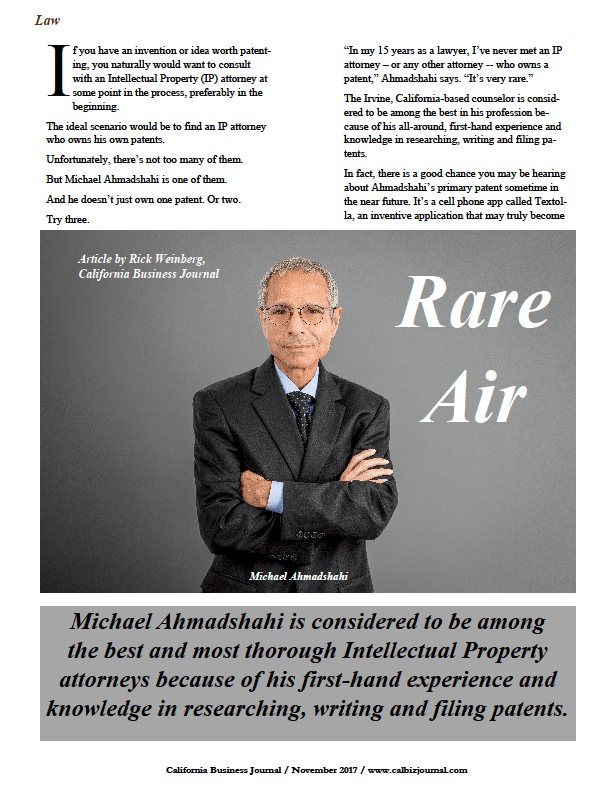