NEW AGT GREENHOUSE TECHNOLOGY IS “THE FUTURE OF AGRICULTURE”

On the heels of a new U.S. Farm Bill, Terry Van Gelder’s revolutionary new AGT Greenhouse is poised to be “the next big thing” in agriculture. 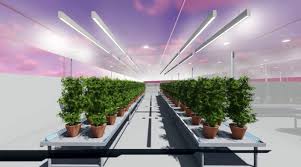 Last summer, a reported one in five samples of marijuana products grown in California failed standard safety testing. Infractions ranged from the presence of pesticides to improper labeling, but the most alarming discovery was of mold and the contaminants that come from it.

The tainted products, many of which are prescribed by doctors for medical conditions, were determined to be potentially dangerous to users. Mass recalls ensued and millions in lost revenue rocked the industry. A dark pall was cast on the already heavily-scrutinized business, but it was also a bombshell moment.

The problem, says Terry Van Gelder, designer and producer of the AGT Greenhouse in San Diego, is that standard greenhouses were never intended for pharmaceutical growth. They’re humid buildings where condensation drip onto plants from the open-steel framing, so anything in that drop of water is going to seep into the plant. Older greenhouses usually are open to the outside and have wall fans sucking in fresh air, but that air isn’t properly filtered and may contain pores, pesticides, or whatever happens to be in the air that day. In summary, it’s not a place you’d want your prescription medication to be from.

“That was a big wakeup call for California,” Van Gelder says, but it’s also precisely what he had in mind when he designed the AGT Greenhouse. Growing up in both Wisconsin and Iowa, where hemp coincidentally grows wild, Van Gelder’s background began in agriculture and branched out to constructing massive buildings like aircraft hangars for the military. When he was brought in to consult for a cannabis grower a few years ago, he was surprised by what he saw. 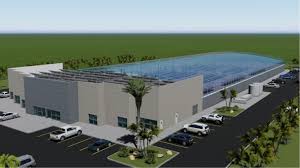 Revolutionary new greenhouse from AGT is “the next big thing” in agriculture.

“I could see there was a major disconnect over what is happening now and what has happened traditionally with greenhouses,” he says, noting that the basic plastic-walled, hoop-style greenhouse was generally unclean and costly to maintain. He formed a list of what a sterile greenhouse would require: controlled humidity, sealed rooms, full transparent insulated interior walls and a ceiling system to fully encase the open steel structure eliminating mold growth. And since Van Gelder is used to thinking big, an exponentially stronger building frame that would handle the weight of ceiling-mounted machinery. Such enormous buildings would also have to be energy-efficient, he says, or no power grid would be able to support them. “That is the mindset behind this whole building structure,” he explains.

The result is a basic framework that customers can have built to the square footage of their choosing. Van Gelder partnered with Nucor Steel to offer four-month delivery schedules regardless of size and purposefully designed it to be the same steel framework that one sees in the ceilings of a Home Depot, Costco or any large steel joist framed warehouse.

“Any steel contractor can build it because it’s a standard design,” Van Gelder says, so clients who buy the greenhouse can easily get bids and construction doesn’t become labor-intensive.

The sterile environment is a little more complicated. Essentially, the AGT Greenhouse is a completely sealed structure that allows zero opportunity for mold to grow, Van Gelder says. Separately-sealed rooms for different crops prevent cross-pollination (or cross-contamination). The air flow in “grow rooms” are controlled by proprietary oil bath fans that trap airborne contaminates in a series of oil-covered filters and the air isn’t taken directly from outside. Instead, it is inhaled (no pun intended) from a system of underground pipes that can be used to cool or heat the required amount of space. The ground is used as a natural cooling and filtration system. 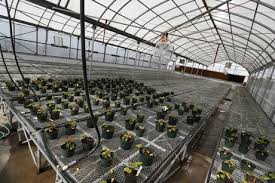 The earth’s natural core temperature is also pulled up to keep the proprietary growing tables at a constant 72 degrees. Van Gelder says it’s only necessary to keep the growing tables at that temperature, not the entire structure. “Your traditional greenhouse,” whether it’s plastic or a single-paned wall, “is just not energy efficient,” he says, so he designed the AGT model to include a two-paned wall as well as an exterior and interior wall — and a roof and ceiling panel — with a little space in between. That air space is used for insulation value and is required for California’s Title 24 Building Standards Code for energy efficiency. The sealed roof and wall air cavity is also used for return air from the mechanical system, so no ductwork in the ceiling. Between this and the solar (or natural) daylighting, the AGT Greenhouse won a 2019 Edison Award, which annually recognizes innovation in a variety of categories. They’ll find out in April if they won Gold, Silver, or Bronze.

Another unexpected boon is the 2018 Farm Bill, passed with bipartisan support in December, which legalizes the nationwide growing of hemp, or Cannabis sativa L., as long as it has a tetrahydrocannabinol (THC) concentration of less than three percent. The bill will place future federal regulations on purity and other standards for cannabis. Clearly, it’s fantastic news for Van Gelder’s company as growers will not only want his greenhouse, they may be required to buy it to be up to code. Van Gelder has even reached out to Senate Majority Leader Mitch McConnell to offer his expertise on the subject, should the federal government need feedback in forming regulations.

As California tries to move on from last year’s recalls, all marijuana products grown in the state will be tested for heavy metals and toxic substances caused by mold. Many expect a clean greenhouse to be in demand. Even big pharmaceutical companies, bludgeoned by the opioid epidemic, are beginning to look at marijuana as the next big thing. Drug patents have been filed in Canada, where marijuana was legalized nationwide by a handful of big American companies for multiple treatments.

Has Van Gelder heard from any of them? He won’t say, but he did say that one large potential client, with a very recognizable name, has intentions to build a greenhouse with five million square feet of growing space. To put that in perspective, Disneyland and California Adventure put together account for only 2.6 million square feet.

“It’s amazing how things work sometimes,” he says. “Farmers are the most optimistic people I know — if the weather fails the crop, they say, ‘Well it will be better next year.’ The AGT Greenhouse changes that scenario to a completely programmable weather pattern 365 days a year.” 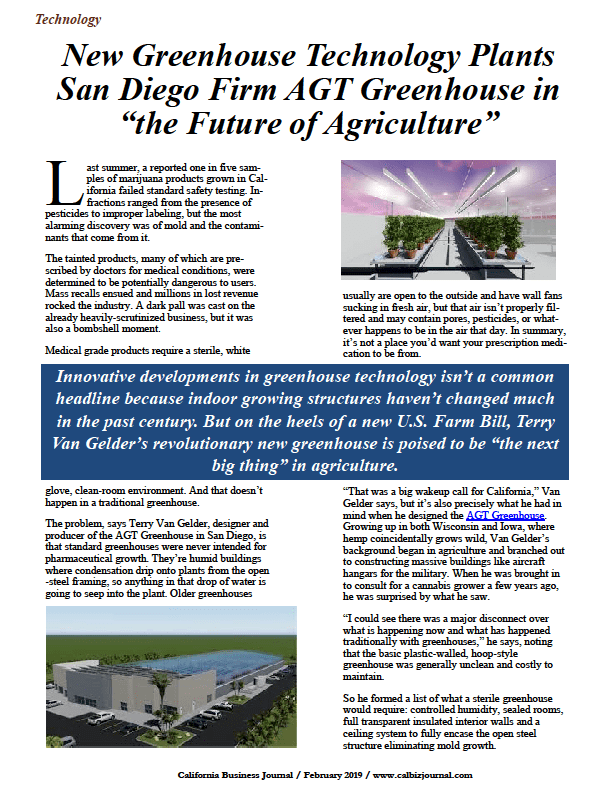 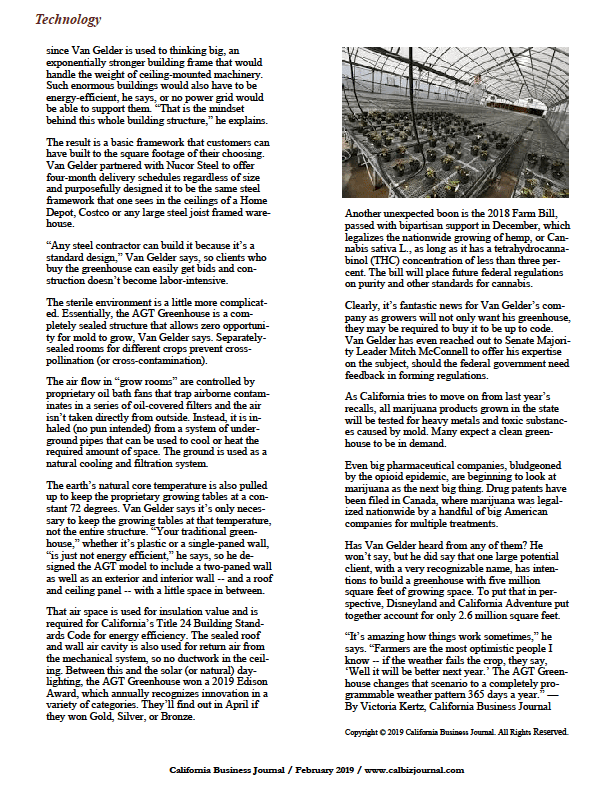