A specialist in developing and managing international business for companies and other entities nationwide, Kimberly Benson’s company, Zenaida Global, focuses on the Middle East. 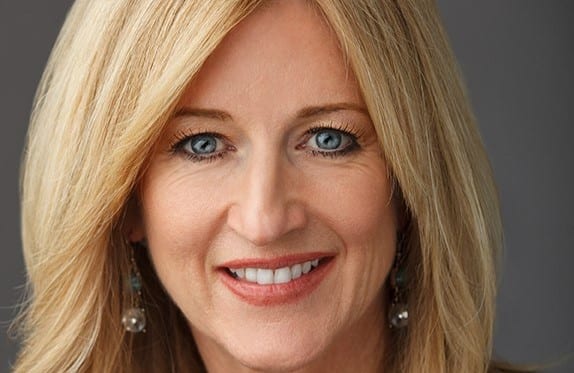 The airport hired Benson to fly to the Middle East regularly, meet with private jet and air cargo companies and develop relationships with other airports.

Her primary mission: Introduce San Bernardino International as an alternative to the congestion of other major airports in Southern California.

Zenaida Global was established when Benson saw an opportunity to embark in a different geographic direction. “I looked around and I knew a lot of people were focused on Latin America and Asia — I had done business in those areas and all over the world in my prior roles,” she says. “But I thought maybe there should be a business focusing on the Middle East and helping companies or entities here in Southern California to connect over there.”

Benson’s expertise includes serving as Primary Vice Chair of the Industry Trade Advisory Committee for Small and Minority Business in Washington, DC. She is also engaged in business development for SRI International (formerly Stanford Research Institute) in Menlo Park, California. She regularly speaks in the U.S. and internationally on trade policy, export finance and international marketing.

In her role for San Bernardino International Airport, Benson travels to the Middle East every two or three months for about a week or a week and a half. Typically she flies to the United Arab Emirates, which hosts the biggest concentration of private jet companies worldwide.

“I really love the work,” she says. “I am constantly interested in the cultural differences that exist and how to anticipate and navigate them.

“There are mistakes that can be made, but mostly there’s always something to learn. Even if I work in specific sectors, the dynamics between the countries are constantly changing. The landscape changes dramatically even if the products or services don’t. The fact that it’s so different all the time is what I like most about it.”

One element that turns out not to be so different concerns consumers in the high end sector  – including those in the private jet market that she is focused on right now.

“What I’ve discovered is that, regardless of the country, the high-end consumer  sector – generally constituting the top 2-5 percent of the population of a country country – can be quite homogenous worldwide. Those high end consumers in many cases have very similar tastes. It doesn’t matter in what country they live. They often like the same kinds of music. They’ll send their kids to the same schools in Europe or elsewhere. They’ll vacation in the same spots or they’ll go to the same restaurants in different countries.” That degree of homogeneity can sometimes make the marketing process easier, she says.

San Bernardino International Airport’s private jet terminal, Luxivair, is Benson’s main priority. “International clients who land their private jets at SBD love the fact that they can land any size aircraft here and that we can clear them through U.S. Customs 24 hours a day, seven days a week.”

“San Bernardino is so interesting not only for the private jet traffic coming into the area, but also for manufactured goods distribution because many other major Southern California airports can’t expand much further,” she says. In fact, UPS and Fedex have both expanded into SBD this year.

San Bernardino is well positioned geographically for the movement of goods,  with convenient access to rail as well as three interstate highways — I-10, I-210 and I-215. 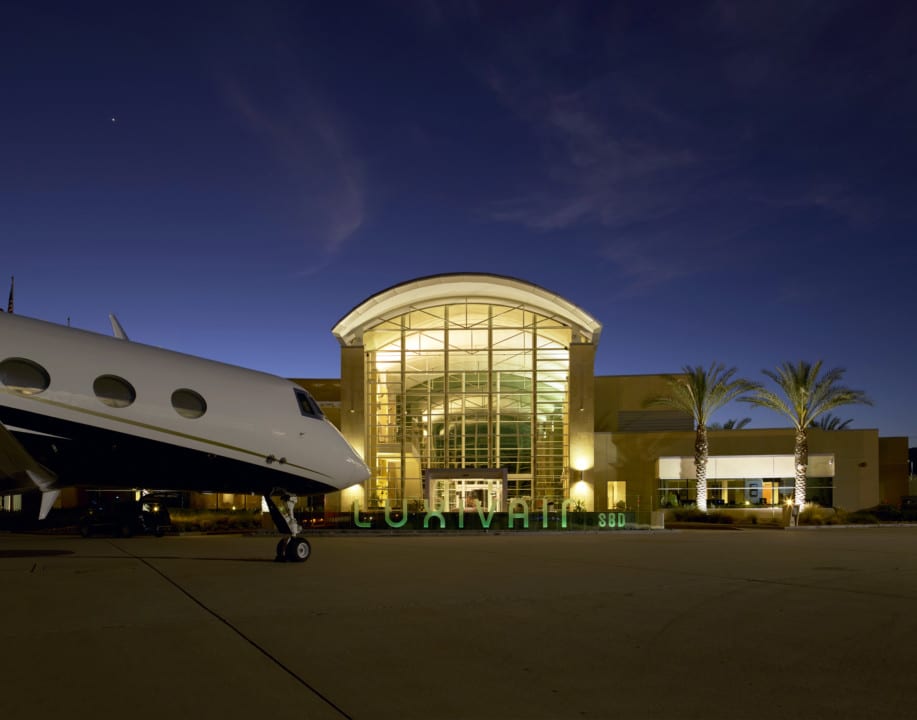 As part of her duties, Benson recently attended the Aviation Africa conference in Cairo, Egypt. “Africa has a particular focus on aviation because many of the countries are landlocked,” she says.

The next Aviation Africa conference will be held in Kigali, Rwanda in February, and Benson plans to be there. The people who attend that conference include civil aviation authorities from countries all over Africa – government officials building out the airport systems and expanding the national airlines of those countries.

There, as in the Middle East, Benson’s goal is to make sure government officials are aware they have alternatives when they fly into Southern California.

For Benson, it’s a matter of contributing to a robust economy. “I want to make sure that what I do really drives regional economic development. The more I can increase traffic to the airport, the more I can encourage airlines to fly there regularly, regardless of whether these are passenger or air cargo flights, and the more jobs will be created in San Bernardino and Southern California in general.”

Working with refugees from Southeast Asia during an internship in college set Benson on her life’s work. “I was finishing up my psychology degree and I thought, ‘I’m not sure I want to be a psychologist. I think I want to do something international.’”

The adventuresome Benson bought a one-way ticket to Argentina and moved there for a year. “From there,” she says, “I ended up working in different companies, all with a global focus.” She also earned a master’s degree in international business.

“It’s interesting how you think your life is going one way – and then takes a completely different direction,” she says.

Benson continues with her export management activities for various companies. “I enjoy working with young companies and even startups, enabling them start building international sales as early as possible if it makes sense for them.”

Those clients come from a variety of industries. In general, smaller companies don’t want to hire someone full-time to handle their international sales. “In many cases they just want to work with me to explore certain regions of the world, to  get their international market research questions answered or figure out their long-term strategy – for example, do they want to be in Europe first or do they want to start in Asia?”

Her top tip for companies looking to expand internationally: “I think it’s important, if you can, to focus on countries for which you have an affinity. I think if you have an affinity for the culture, the region and the people you’ll be more apt to go there more frequently and develop positive relationships. Ultimately I think that’s what makes all of this work. “

Benson’s export management work is performance-based; she only gets paid upon success. “I identify international distributors and then manage those distributors on an ongoing basis for our clients, making money when the sales occur.” In this way Zenaida Global’s export management clients don’t have to make major investments to start their international expansion efforts.

“It’s obviously a risk on my part. Sometimes companies think they want to go global, but once they get into it sometimes they either don’t like it or they find that they have other priorities,” Benson says. “But then at least they haven’t taken a huge loss. I’m trying to make it easier for companies to sell internationally if it’s possible to do so effectively and profitably.” 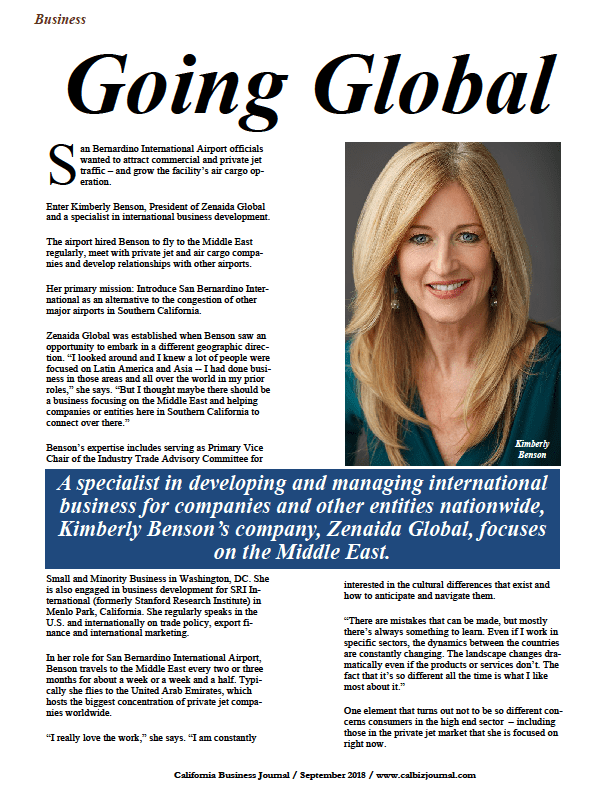 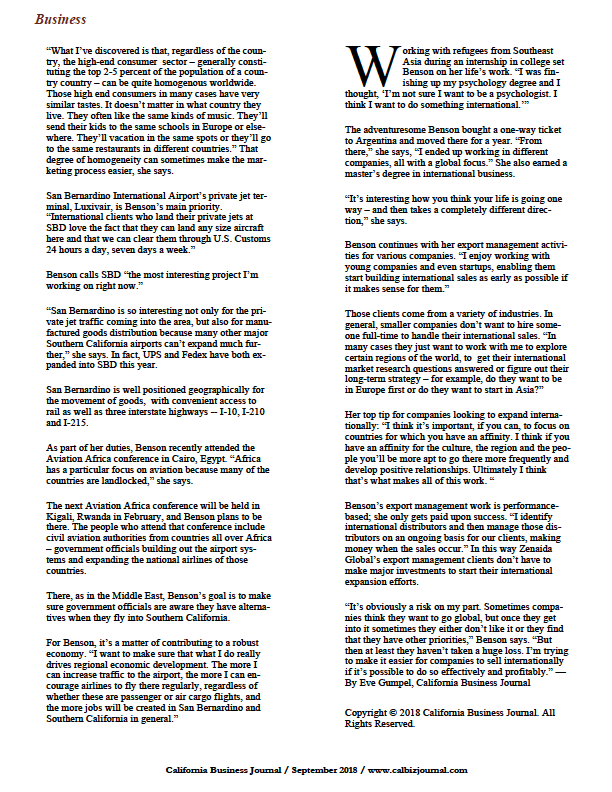