PhenoVista Biosciences’ sophisticated imaging and machine-learning helps biotech and pharmaceutical companies determine how well their early-stage drugs work – and what the next steps should be.

Developing new drugs can take as much as 15 years and billions of dollars before a medication is available to help patients combat their disease. No one knows this more than James G. Evans, Ph.D., CEO and founder of Phenovista Biosciences, which was formed to help accelerate the drug discovery process.

“We help drug companies get a better, more thorough understanding of the biology and the disease and how well their candidate drugs affect them – more quickly and for lower cost,” says Evans, whose clients are biotechnology and pharmaceutical companies performing early drug discovery.

PhenoVista’s specialty is phenotypic screening, which uses sophisticated microscopes and analytical software to characterize the phenotype of cells and determine if candidate drugs are affecting them. Phenotypes are the observable properties of an organism produced by the interaction of the genotype (your genetic code) and the environment. 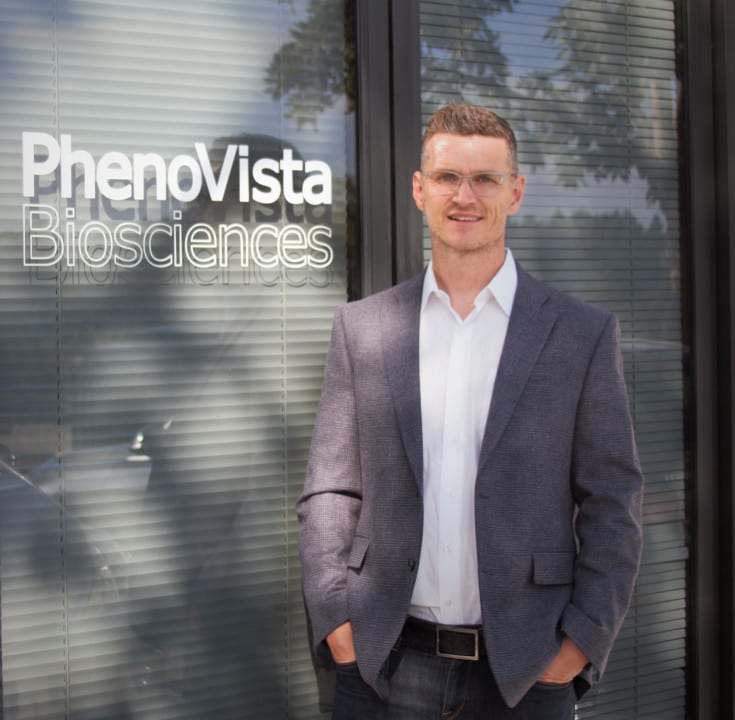 James G. Evans, Ph.D., CEO and founder of PhenoVista Biosciences, is an expert in helping accelerate the drug discovery process.

The company’s robotic microscopes take thousands and thousands of images of cells – be it neurons, blood cells, cardiac myocytes (heart muscle cells) or another type of cell. The highly-advanced image analysis, combined with machine learning and artificial intelligence, not only extracts a mass of numerical measurements but critically identifies which numbers are most useful.

From those measurements, Evans and his team can tell such things as, “These are healthy cells and they have the following set of numerical descriptors. And, these cells are unhealthy and they have a slightly different profile. This candidate drug seems like it’s actually fixing the cells in terms of their appearance or function aka ‘phenotype’.”

Each step in the drug discovery process gets more and more expensive. Biochemical assays – which determine the binding or activity of biological molecules, such as enzymes – are the simplest and cheapest. 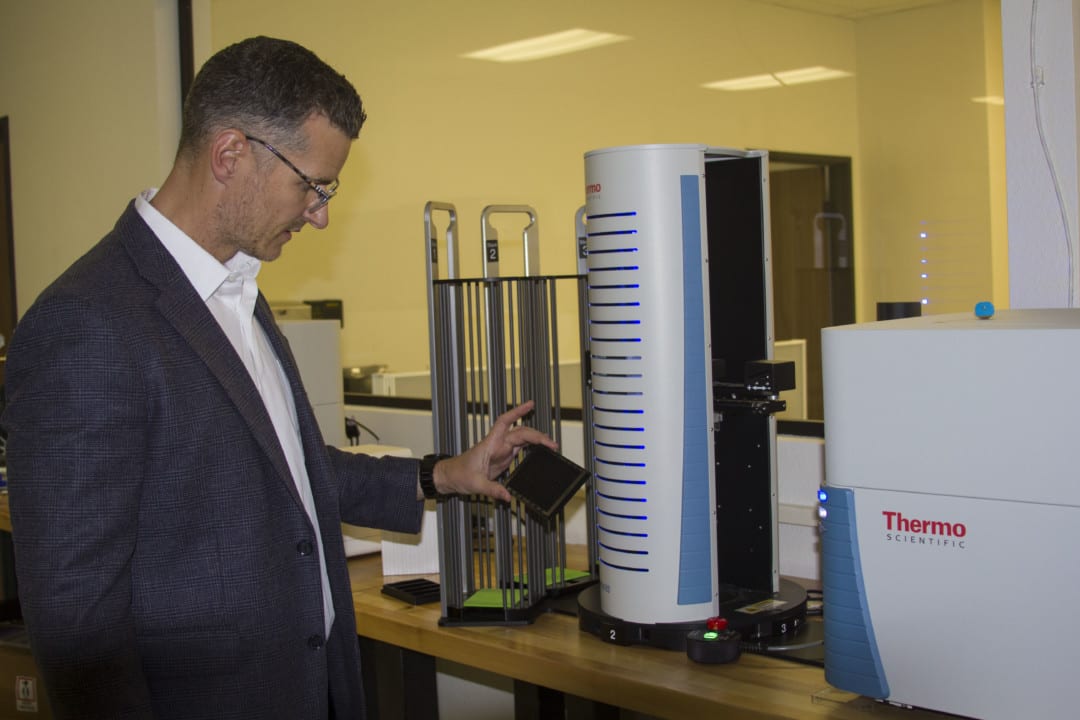 PhenoVista Bioscience’s robotic microscopes take thousands and thousands of images of cells – be it neurons, blood cells, cardiac myocytes (heart muscle cells) or another type of cell. The highly-advanced image analysis, combined with machine learning and artificial intelligence, not only extracts a mass of numerical measurements but critically identifies which numbers are most useful.

Companies can do hundreds of thousands of biochemical tests for a few cents per candidate drug. These so-called target-based tests provide the researcher with very limited information. At the other end of the spectrum, animal-based studies provide the closest alternative to clinical trials in humans but are extremely expensive (thousands of dollars per test) and take many months or even years to complete. Sitting between these extremes, phenotypic screening using human cells (often derived from induced pluripotent (iPS) stem cells) allows PhenoVista to provide drug discovery researchers with a rapid and more cost-effective way to test their candidate drugs in a physiologically-relevant model system.

PhenoVista uses what’s known as “high-content screening” to uncover the best and most relevant information possible before clients move into the clinic for testing. High-content provides hundreds or even thousands of measurements as well as actual images of the healthy, diseased and therapeutically-treated cells.

“You can actually see what’s going on in these different conditions,” Evans says. “You get a lot more value since the extra information enables our clients to make more informed choices about what experiments do next.”

With a background in molecular and cell biology, Evans delved into imaging in graduate school, informatics and systems biology at MIT, worked for drug discovery companies as a consultant, and then for a company performing high-content screening for the Environmental Protection Agency.

“I realized there were many small biotech companies that didn’t have access to this technology,” he says. Not only is the instrumentation expensive, there are a lot of hidden costs. Storage, for example: “We’re generating terabytes of images per week,” he says. Another obstacle is the highly-trained personnel you need. “High-content tends to be tricky. You have to have really experienced, detail-oriented and well-trained scientists to do this kind of work,” Evans says. “Thankfully, we have some of the world’s most talented imaging scientists on staff so our clients really get high quality service.” 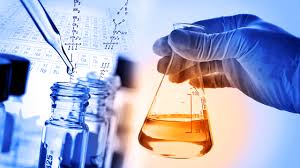 What surprised Evans and co-founder and Chief Science Officer Anthony Essex Ph.D., is that PhenoVista has found itself working with some of the biggest pharmaceutical companies. “They wanted to work with us because, as specialists within a nimble start-up environment, we solved problems quickly and creatively.” he says.

As a result, the company, founded in San Diego in 2014, has grown rapidly in the past year. Essex and Evans started the company as its sole employees, adding Erika Martin as laboratory manager in 2015. Now the company numbers 10 and continues to grow. Though PhenoVista relies heavily on automation, Evans anticipates potentially doubling the team this year. As for revenue – it grew fivefold last year. “I see us growing steadily over the next couple of years perhaps topping out at 50 people. By then, our annual revenue should be in the $50 to $100 million range.”

Originally from England, Evans worked for Harvard and MIT in Cambridge, Mass., for several years. He and Essex are both avid surfers, so they both ended up in San Diego since it has a great mix of beach and biotech. “It’s a good place to raise a family,” says Evans, who typically goes surfing for a couple of hours before heading in to work, then picks up his son from daycare on the way home.

In the beginning, Evans experienced a steep learning curve as a new business owner. “As scientists, we tend to think the science is the only important thing. As a small-business owner, I quickly learned that there are lots of other critical things like accounting, human resources and marketing … things you don’t have experience in as a scientist and have to learn quickly as an entrepreneur.”

The growth of the company has eased the burden on Evans. “We have really great people who can handle the occasional fire that comes up. It’s not all on Tony and me anymore, so we can think about more strategic, long-term plans for the company,” he says.

What does he see in PhenoVista’s future? “We want to keep extending our capabilities and pushing the envelope in terms of the complexity of the offerings we have for our clients. Ultimately, it’s about giving our clients an edge over their competitors through better data.” His goal is to make PhenoVista’s tests and studies more and more predictive for drug discovery.

With that purpose in mind, PhenoVista just purchased a powerful laser-based microscope to do complex three-dimensional imaging of stem-cell based organoids “so we’re not leaving information in the images – we’re getting as much value as we can for our client.”

Long-term, he says, “If we can take something that would take a year for a client to do and bring it down to a few months, that’s hundreds of millions of dollars in savings and most importantly, better drugs for patients sooner.” 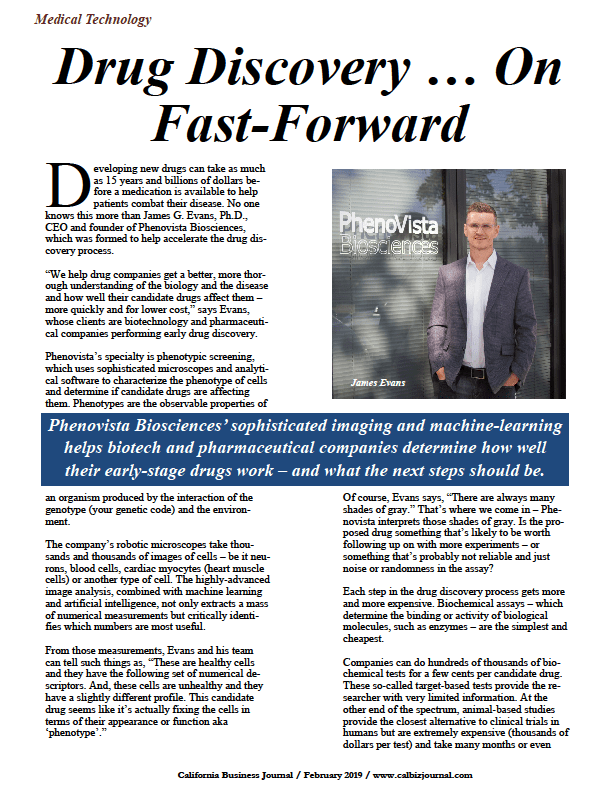 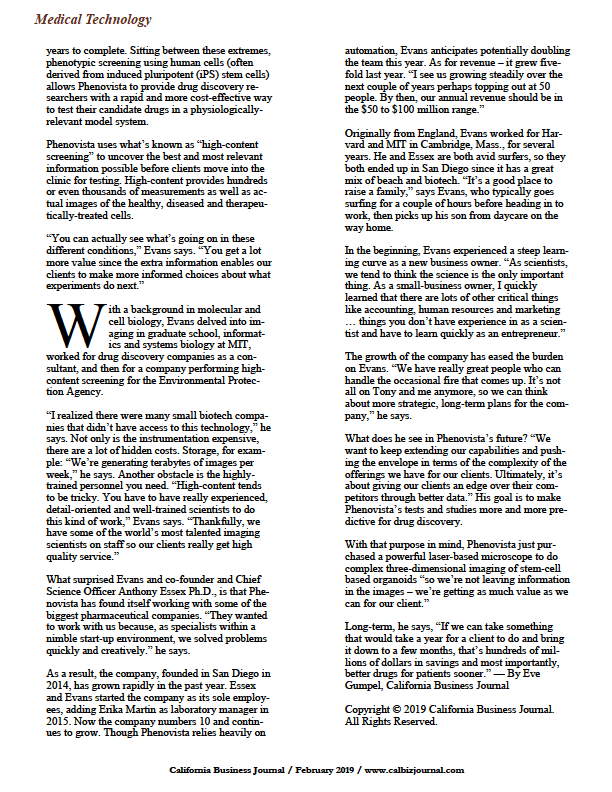 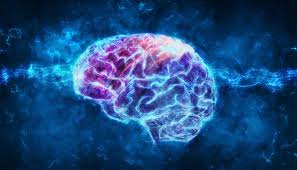