How Vito Glazers transformed himself from an art school student into a publicist-entrepreneur-controversy-loving-documentarian. 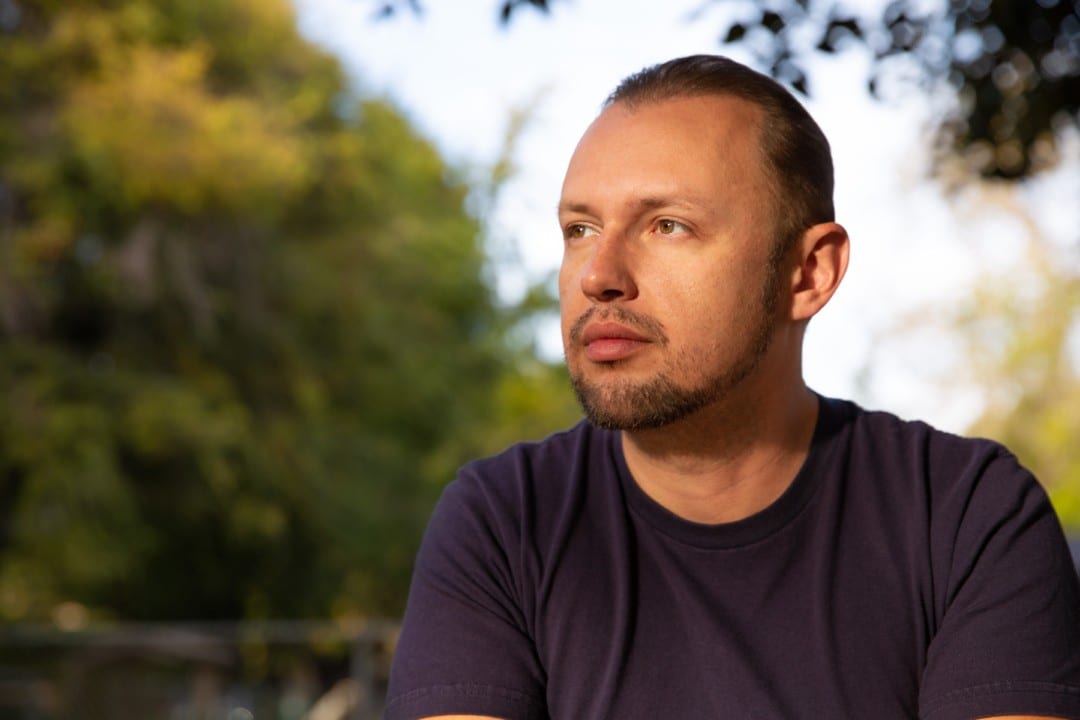 Glazers is in the midst of another film project, this one about President Donald Trump and the people who voted for him. The film is called “Promises Made, Promises Kept,” and it will highlight various groups who support the most controversial president of all time, and who are “seldom, if ever, represented in the mainstream media,” Glazers says.

Glazers was approached a year ago about doing publicity and lobby work for an equal rights bill. The bill was an equal parenting act that would remove the gender bias from divorces “because so many men are treated unfairly in child custody cases,” Glazers says.

“In this process of doing this work, I met a fellow father who was fighting to have access to his children and shared with me a story that Donald Trump had sent his family $15,000 in a time of crisis.”

The man’s name was Shane Bouvet, his father had been diagnosed with cancer and, as a volunteer on the Trump campaign, word got out that his family was struggling to find the finances to pay for his father’s medical insurance deductible.

“Trump reached out and gave him the money for the treatment,” Glazers says. “It ended up saving his father’s life. You don’t hear that side of the story. The media is extremely left-leaning and extremely liberal, and is especially hostile towards the President. When I heard that positive story, I knew there was a side of the President that wasn’t being told, so I started researching.”

Glazers found that the media – outside of FOX News, The Blaze and The National Review, et al — portrayed Trump supporters as “hillbillies and uneducated white southern rednecks that are filled with hatred and that’s why they support the president.”

He also discovered that “there is a huge portion of the population that supports the President but they don’t want to be categorized as Trump supporters. There are millions of people in this country that quietly support the President for reasons that are not represented in the media. I felt it was my obligation as a storyteller to go out and tell these peoples’ stories.”

Thus, the seed for this documentary was planted. “I wanted to create a film that shows the other side of the narrative, which I believe is what responsible journalism used to be. Today, most journalism is editorial.” 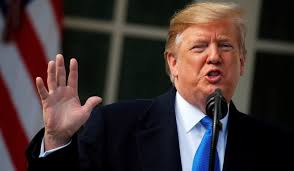 By creating this documentary (and as he does in much of his clients’ work), Glazers will utilize a strategy known as “newsjacking.” He explains it as “the concept of making a controversial statement in a brand’s voice about something that is trending in the media in order to rile up a response and be able to leverage media coverage from that.

This is something Glazers uses with established clients in order to get major news coverage — and it will come in “very handy” with the making of his new documentary. In fact, Glazer notes that some of the best news jackers in the world are President Trump and Elon Musk.

Glazers’s goal with the Trump documentary is to “tell the story of the people who are currently being underrepresented” and provide different interpretations “so that people can feel comfortable knowing the truth and living the truth, and deciding from there who they want to support and why.”

The plan is to do this by “breaking down promises the President made during his campaign and his presidency,” and connecting with the people “who are supporting him for keeping those promises, and how they influence America and how it relates to all of us. It will prove to be very interesting to watch.”

Glazers was once a very private person who was somehow transformed into an individual who shares controversial opinions with millions of people via his news network. His shift from the shadows to appearing on nearly every major news outlet isn’t the only growth he’s seen. He started as an art student in Chicago, and it was there that his path changed and forever altered his life.

With his sights originally set on becoming an artist, a professor told him that business seemed to be more his destiny. “He taught me a lot about business,” Glazers says, referring to his professor. “He said ‘You’re really more of a business person and entrepreneur. Once you make a lot of money from business, then you can come back to art.’ And that changed the whole direction of my life. Before then I had never thought of myself as a business person.”

Glazers launched into the internet marketing and online publishing world. “Monetizing content online was really innovative and cutting edge at the time — 2008,” he says. “I saw it as an opportunity to take everything I knew about business and find a way to integrate all the things from the creative world that I wanted to integrate.”

Today, Glazers “helps people who have amazing stories to tell. We help them take that story to not just package it to share with the world via a book, a podcast, etc., but we help them grow an audience online so they can bring their audience in and learn how to share their story with who needs to hear it.”

The hardest part about being an entrepreneur in this modern-day, web-driven, social-media landscape is “finding motivated people who want to work and help you build your business,” Glazers says. “Despite how much opportunity there is out there, few people are willing to pursue it. There are a lot of people that want to find opportunity but they aren’t even aware it’s possible. They go through our weak school system that trains them to be followers and doesn’t give them life skills to succeed as an individual. Those people need strong mentors.”

One of Glazer’s “unlikely mentors” was Dennis Rodman. “I met Rodman about 10 years ago and he had a big influence on me because I was very private before then and very low-key. He said to me: ‘If you want to be a man and you have a talent, you have to be able to stand on a mountain and share that talent with the world. Otherwise you aren’t living up to your fullest and truest potential.’”

That attitude is the truth for many successful entrepreneurs and well-known people. “That’s exactly why I’m producing the documentary on Trump and his supporters,” Glazers says. “It’s just too powerful and intriguing to ignore.” 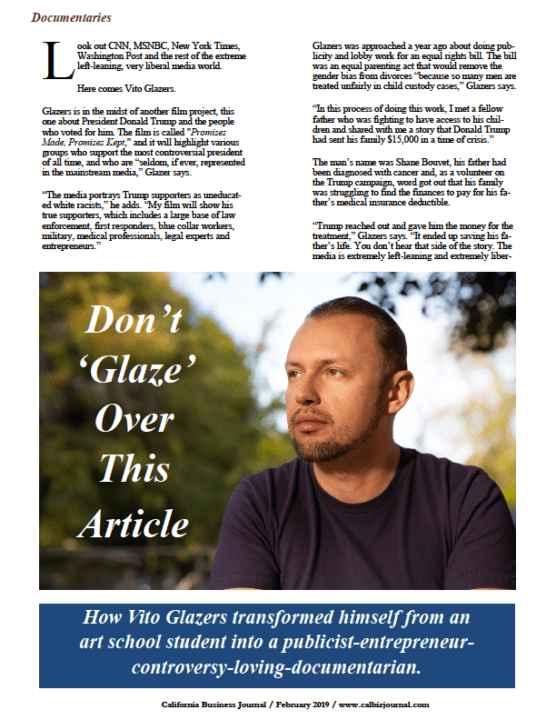 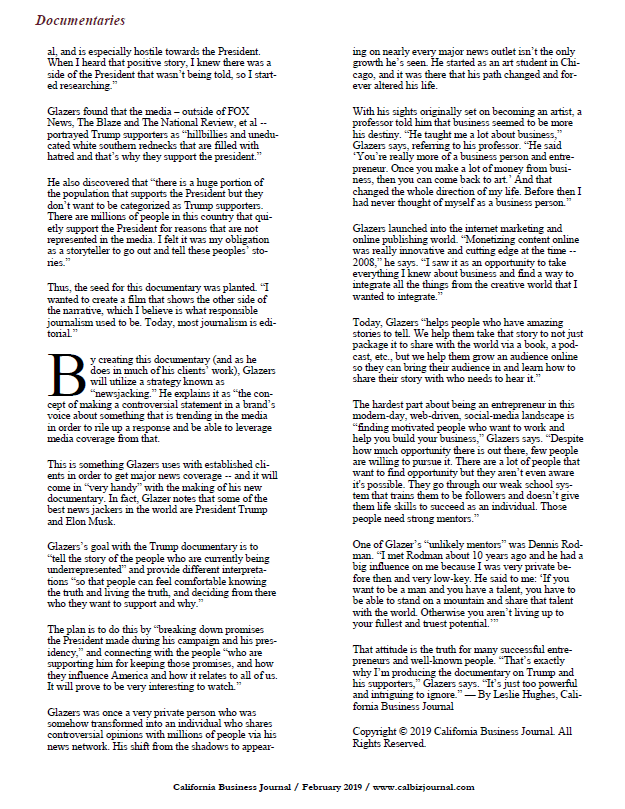