Brad Smith’s children’s book publisher ABC and ME and Kevin Tuohy’s Adrenaline Challenge Coins are among the 2.5 million small businesses across the nation that are owned by veterans. This fraternity — roughly 9% of U.S. small businesses — generates more than $1.1 trillion in annual economic activity and employ more than 5.8 million people.

Brad Smith, a 26-year veteran of the U.S. Coast Guard, went into publishing to honor the wishes of his late wife, Megan, to help children of military families and first responders cope with loneliness and longing.

The California baby boomers—one from the lush Russian River Valley in northern Sonoma County, the other from sun-soaked southern Orange County—aren’t your prototypical entrepreneurs.

Their age, charitable drive and core businesses — manufacturing and publishing — tells that story. Their service to their country and contributions in the private sector tell another.

Smith’s children’s book publisher ABC and ME, headquartered in Windsor, Calif., and Tuohy’s Mission Viejo, Calif.-based Adrenaline Challenge Coins, are among the 2.5 million small businesses across the nation that are majority-owned by veterans. All in, this fraternity — roughly 9% of U.S. small businesses — generate more than $1.1 trillion in annual economic activity and employ more than 5.8 million people.

Smith lost about five years of family time due to tours, deployments and work as a program manager integrating aircraft electronics systems for defense contractors. To stay connected he wrote songs for his daughters, Christie and Alison, and every night they could, they sang those songs together.

“I wanted to have some connectivity and show my love for them,” says Smith, the recipient of a Coast Guard Commendation Medal and Desert Storm Gulf War Southwest Asia Service Medal.

If he couldn’t make the call, Megan led song time.

In late April 2017, Megan was diagnosed with multiple myeloma, a cancer in plasma cells that attacks bone marrow and halts the production of normal blood cells. A week later she died, just before the Smith’s 25th anniversary. Smith and his daughters made a pact to celebrate her life, rather than mourn her passing.

“We didn’t look back, we didn’t go into the darkness,” he says. “I told the girls we’re going to start a company.”

The songs he wrote and sang to his daughters became the foundation of a hard cover illustrated book, “When You and I are Fast Asleep,” and an accompanying e-book, coloring book, posters and app.

Christie, a marketing executive, came up with the company name. ABC and ME commemorates their family: Alison, Brad, Christie and Megan Elizabeth. “It was a perfect name. It just tells the whole story,” says Smith, who launched the website earlier this month.

Tuohy joined the Air Force at 19 to fight fires, the only place that could guarantee a firefighter job at such a young age. After the service, he spent 34 years on the job — 31 with the Orange County Fire Authority. He saw plenty in those years, marked by triumphs, loss and the sensational from air, land and sea.

He worked the Mission Viejo crime scene of Richard Ramirez’s last murder. A tip from a 13-year-old boy that August night in 1985 led to the arrest of the “Night Stalker” later that week. Tuohy was also on the first strike team out of OC that battled the 1993 Malibu fire, the largest and most destructive in California history at the time. Following the Sept. 11 attacks, he helped raise $1.1 million for families of the New York City Fire Department. The NYFD lost 343 firefighters that day, and 241 since then due to 9/11 rescue and recovery related illnesses.

Tuohy and his crew were invited to participate in the 2002 St. Patrick’s Day Parade. During that trip, a few OC firefighters were introduced to challenge coins by their East Coast brethren. For years after, Tuohy had them made for friends and fellow firemen. In 2011, he launched his own business, though it was more of a hobby at the time.

The history of challenge coins is cloaked in mystery, with three competing stories of origin. The earliest and most romanticized is set in WWI involving an affluent pilot who commissioned a bronze medallion for every member of his unit. He was shot down in Germany, captured and then escaped into the hands of French soldiers, who pegged him an enemy spy. On the brink of execution, the leather pouch around his neck was removed and the coin emerged.

A French soldier recognized the insignia of his U.S. unit, the pilot’s only identification. The coin saved his life, the story goes, and today, challenge coins are expected to be carried by holders at all times.

A hefty bar tab might be in line for those that don’t if they’re called to present their coin on the spot. The most recent origin story takes place during the Vietnam War, at an Army infantry-run Vietnamese bar, where newcomers were expected to pony up a round if they couldn’t prove they saw combat. 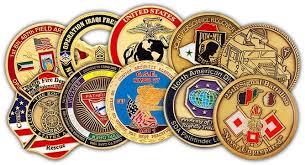 A token with a unit’s insignia eventually became accepted proof. “I was in military in the 70s and at the time, challenge coins had all but disappeared,” Tuohy says. “In the past 20 years they’ve resurfaced and absolutely exploded into over a billion-dollar industry.”

Adrenaline Challenge Coins has benefited from the renewed popularity, now a common source of recognition for military, first responders, and in sports, schools, churches, even bars. “We make coins for people from just about every walk of life,” Tuohy says.

A challenge coin, typically struck from bronze, pays tribute to an organization, commemorates a special occasion, recognizes an event or achievement, or memorializes a special person or group. His client list includes the NFL, 30 NCAA schools and General Motors.

The company has made custom coins to commemorate the 10th anniversary of 9/11 and for the World Police and Fire Games. They’ve sent coins to U.S. troops in the Republic of Georgia, Cambodia, and Germany, as well as to the special forces of Brunei.

They’ve also made coins for the 2014 U.S. Men’s National Hockey Team and for Tuesday’s Children, a nonprofit established after the Sept. 11 attacks that helps families affected by terrorism and traumatic loss.

“People are coming to understand the roots, the history and tradition behind it,” Tuohy says. “It’s a very cool thing.”

ABC and ME and Adrenaline Challenge Coins were recently selected by Vistaprint for a free professional marketing upgrade, part of an initiative called Micro Main Street, to highlight the contributions of veteran-owned businesses. Services included branding, messaging and their own pop-up stores at LA Fleet Week, an annual celebration of the armed forces at the Port of Los Angeles.

“We spent a lot of time with military people there,” Tuohy says, trading coins among shipmen and Navy Seals.

Smith introduced his coloring book to more than four hundred families during Fleet Week. He hopes to partner with Military Mama Network to help support troops in need and include the song book in care packages for children in hospitals. “I think I sold about half my books there,” he says. “More than I ever thought.” 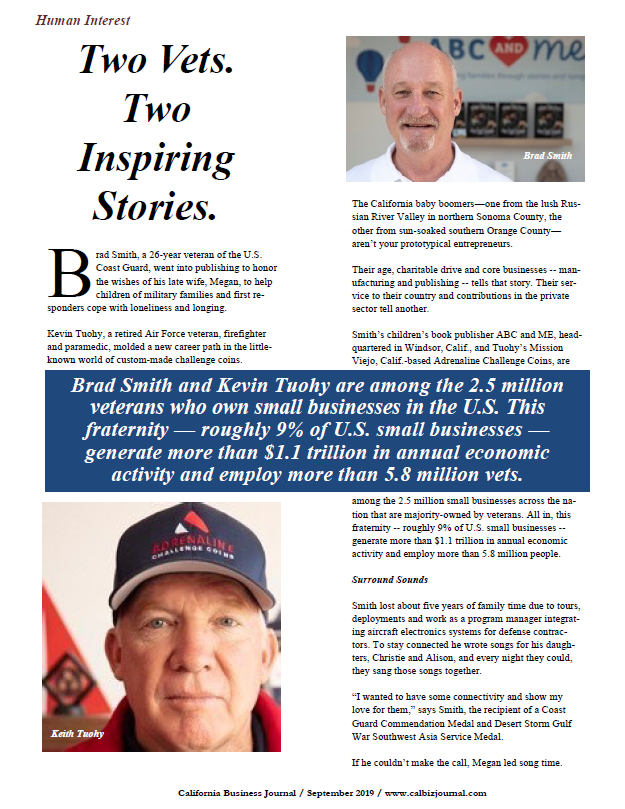 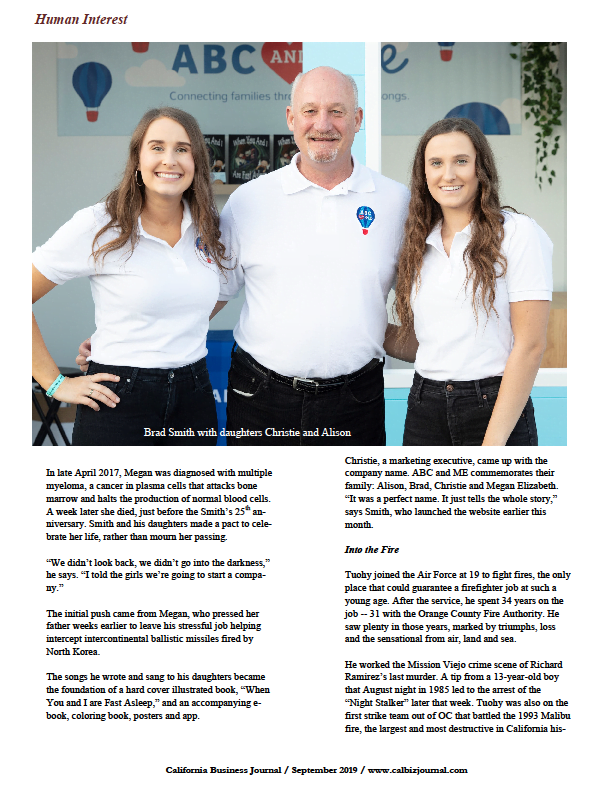 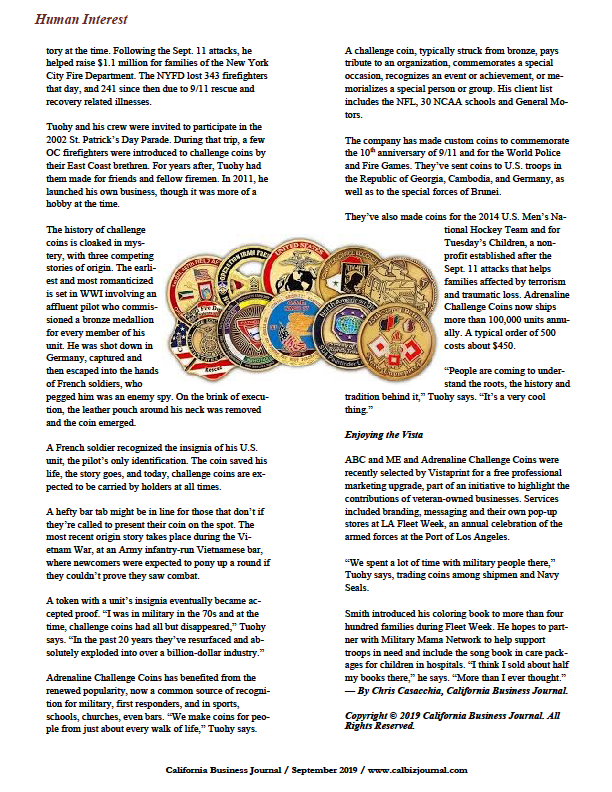 How To Determine Your Place of Worship Seating Capacity