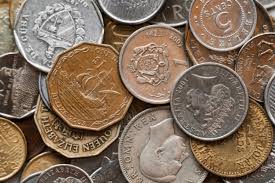 Adam Crum has spent 33 years in the coin industry, facilitating more than $1 billion in rare-coin transactions. His latest venture is Finest Known, a full-service online trading platform where collectors and others in the numismatic industry can buy, sell, learn about, trade, borrow, store and show the most exquisite rare U.S. coins, ancient coins, modern coin and Americana.

What is a coin? Most people would answer that much differently than Adam Crum.

While most people see a coin as a way to pay for something, Crum sees history, a link to past civilizations from 650BC to the present and the people that lived in them. Many of those societies no longer exist, but they left behind proof that they once did.

Crum collects those artifacts, but his passion goes way beyond merely amassing a collection. After 33 years in the industry in which he has owned several companies and facilitated more than $1 billion in rare-coin transactions, his latest venture is Finest Known (formerly Monaco Rare Coins), a full-service online trading platform where collectors and others in the numismatic industry can buy, sell, learn about, trade, borrow, store and show the most exquisite and rare coins.

“These little works of art made of gold, silver, bronze, and copper, which first appeared around 650 BC, literally helped establish the path for world trade,” Crum says. “That is what captured my imagination when I was young and has driven my passion for trading in coins and currencies. I don’t consider what I do work at all. I consider it a passion for history, which I get to express each time I buy a new collection, an exciting hoard or a newly-discovered sunken treasure. I get excited about the opportunity to rediscover the history that comes alive with each one.”

Crum’s interest started as a young boy in Garland, Texas. He and his father would go through large jars of coins looking for the rare wheat pennies or buffalo nickels, then placing those finds in books. They once found a 1937 three-legged buffalo nickel, a 1914 Denver-minted wheat penny and a 1922 penny.

Sadly, Crum’s father passed away when he was just eight years old. Coins then became a way for him to connect with his now-absent parent. “Coins brought me close to him,” Crum says. “Coins took a back seat to school, sports and girls.”

It wasn’t until Crum was 22 that this childhood hobby became a career. “A friend who was dealing in coins as a commodity suggested I get into the industry,” Crum says.

Along the way, Crum has handled, bought, sold and toured with some of the finest and rarest coins – sometimes more than once. There’s an 1861 Double Eagle, one of two known $20 gold coins, that he bought and sold a couple of times. Believed to have been owned by King Farouk of Egypt, it set a world record in 1988 when it sold for $660,000.

There’s also a Brasher Doubloon, a $16 gold coin privately minted by Ephraim Brasher in 1787 and was largely forgotten. When one reappeared in 1838, it was highly noted and sold for a record price for any known coin at the time. It regularly makes lists of the world’s most valuable coins and it remains one of Crum’s favorites. 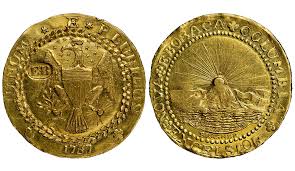 The 1838 rediscovery coin, which is the finest known of seven, became available at public sale in January 2014 and Crum purchased the coin for just over $4.5 million. It then became the featured coin of a tour to allow the public to experience the first-ever gold coin minted during the birth of the nation. The coin resold to a collector in January 2018 for a reported $5.5 million.

Crum’s largest transaction wasn’t a coin but an 80-pound gold bar that was part of the vast treasure recovered from the SS Central America, nicknamed the “Ship of Gold.” The steamship carried 578 people and 30,000 pounds of gold when it sank in a hurricane off the coast of the Carolinas in 1857.

The tragedy shook public confidence in the economy and contributed to the Panic of 1857. The ship was discovered in 1988 and Crum assisted with the $8 million sale of it, receiving a small commission, but he admits it wasn’t about the money. “I was just excited to be a part of such a historic artifact,” he says.

One secret to Crum’s success goes back to a dinner conversation he had about 15 years ago with an Orange County businessman he highly respected. “I looked at him and I said, ‘If you could say one thing, one bit of advice in one sentence or less, what is it?’ He looked at me and he said, ‘I’m always long on quality,’” Crum says. “He was saying, ‘I don’t buy anything if it’s not quality.’” If the market sours in the short or intermediate terms, it doesn’t matter, the man told Crum. “This helped me weather the losses,” he says.

“That didn’t work out real well for us, but they’re nevertheless very exciting coins,” he says. “The market, when it’s good, it’s fantastic, and when it’s bad, it’s still OK.”

His current focus, Finest Known, was launched March 1. “It is the premier location for ‘all things’ related to rare coins and collectibles,” he says. There is an auction house with online auctions 24 hours a day. There is an online university where people can read articles, watch film and video and learn about coins, their history, why and how they’re made, and how to collect them.

“I can take a guy off the street, and if he has any interest at all in coins and history, I can plug him into the university and in 90 days make him sound like an expert,” Crum says. “If you really study it, in 90 days you’ll know more than the average collector.” 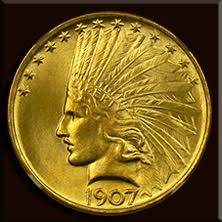 There are platforms for buying and selling, retail and wholesale – as well as valuing collections. Crum is also creating a lending arm where anyone with a collection can borrow against it to buy something. The company also created an app.

“If I can provide someone with the education, provide the inventory, provide an exit strategy, provide the possibility of lending, provide the opportunity to buy something and borrow money to buy it, all those facets of the business are why we’re going to be in demand and that’s how we will grow the business,” he says.

If he’s right — and all signs point that he is — more people will join in his passion that started with rare pennies and buffalo nickels — and his dad.

“These little artifacts that we collect, especially ones of beauty and quality and rarity and tremendous history associated with them, there’s no doubt in my mind that these items that have sold for millions are going to continue to further escalate in value.” 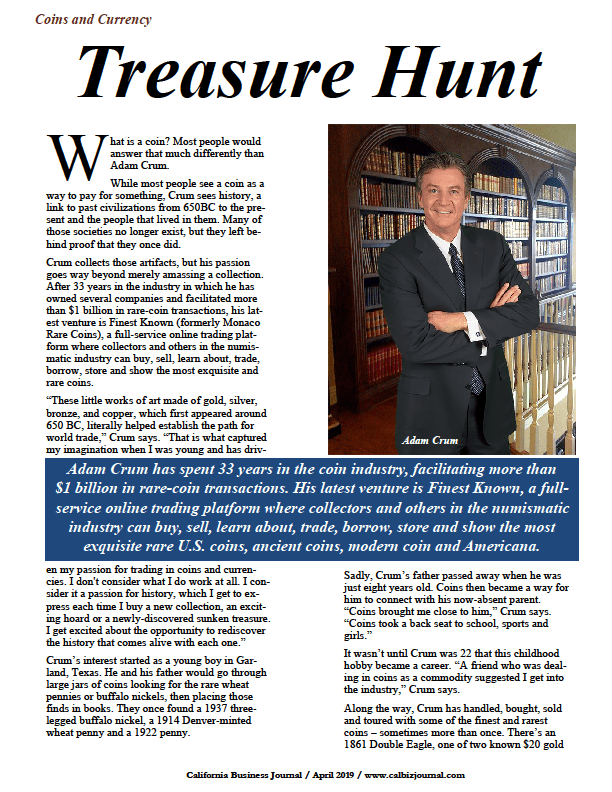 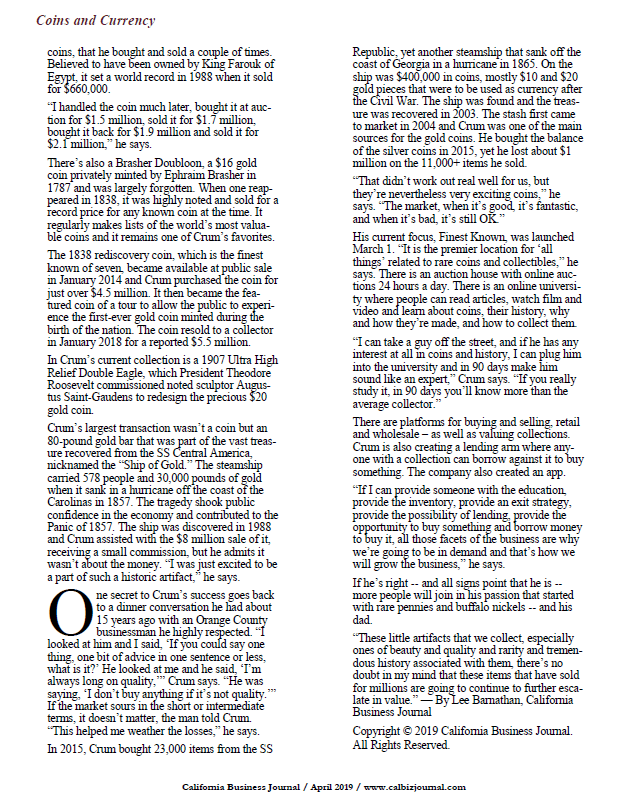