The Tierney Center provides veterans unprecedented access to resources that “enhance their lives.” 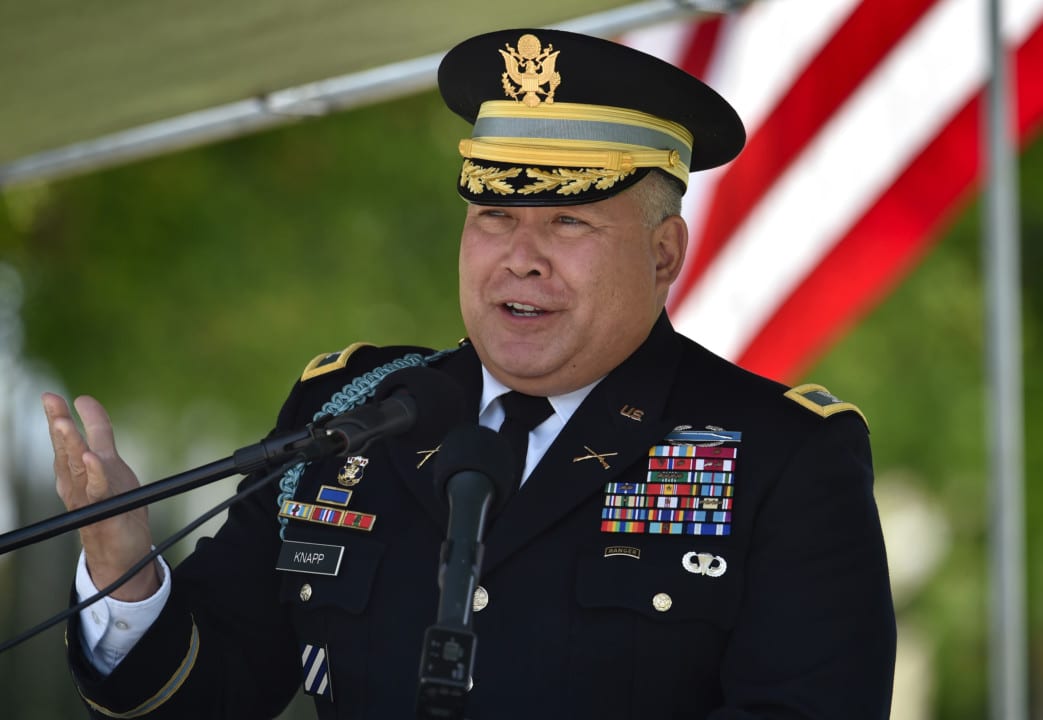 When Denton Knapp retired from the U.S. Army as a Colonel, he was hit with the uncertainty that comes with a new job search.

Nothing, he realized, could really ensure he’d be hired somewhere outside of the military that both paid and provided him purpose—not his West Point education; not his 30 plus years of military service; not the transitional courses the government had him take to help him re-adjust to civilian life.

During Knapp’s job search, which included a daunting months-long period of doubt about where he would end up, he was looking for something “meaningful.” He wanted to give back. After many decades in the service, he wanted to continue to serve.

“No better job for me than to help veterans and their families,” he says.

So he applied to become the Director for the Tierney Center for Veterans Services, which provides veterans access to resources that “enhance their lives.” To Knapp, the center, which is located in Tustin, California, seemed to be just what he’d been looking for.

Then he was hired, creating a perfect match.

When he gave his interviewer a tour of the multi-story facility, he was just 60 days into the job. That was more than enough time for Knapp to learn he’d made the right choice. 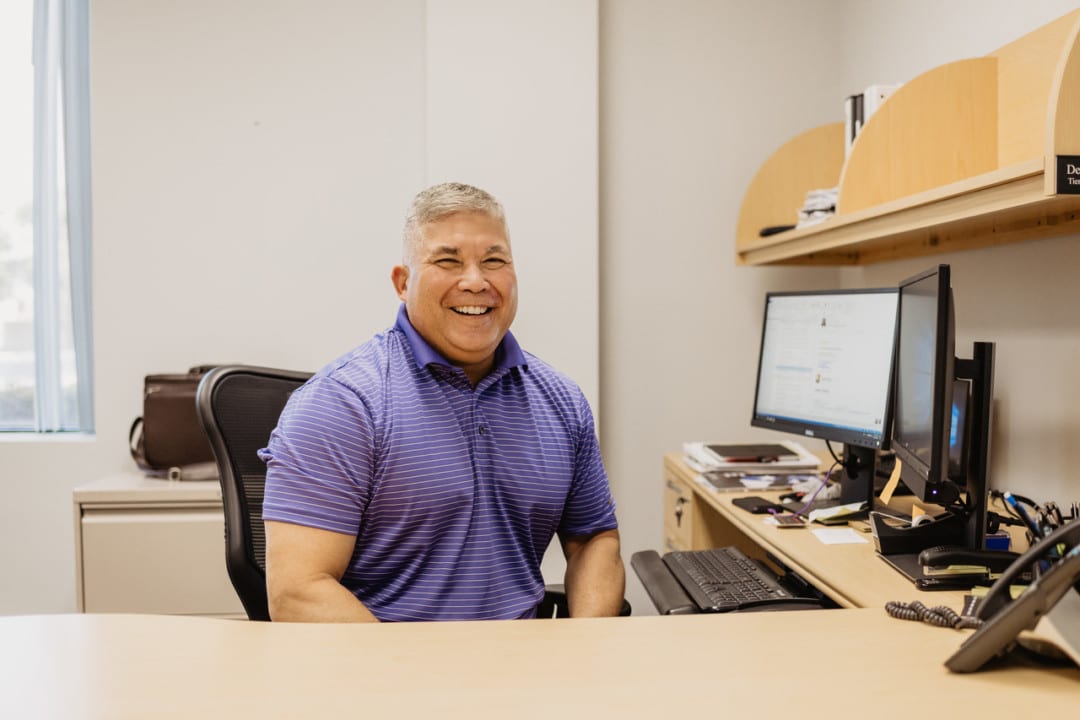 The center has a variety of functions under Knapp are ultimately coalesced into one multi-pronged service to ensure each individual veteran who comes to the center receives the help they need.

It’s not as simple as a job placement, Knapp says, because veterans aren’t that simple. Thankfully, the center is staffed with a wide gamut of people from both military and non-military backgrounds. Some of the diverse range of veterans working for the center even fought in Vietnam. This, Knapp says, ensures that the complex intersections of different people with different needs are accounted for through one-on-one, personalized guidance and support.

That guidance is a three-step process. First, specialized counselors conduct an initial assessment of the veteran to determine their “feasibility” or readiness to be successful in a work environment based on a variety of factors, including how well they have adjusted to civilian life.

“There are an array of things we assess. Some of the most common problems facing veterans that we encounter here are either Post Traumatic Stress or Post Traumatic Stress Disorder and Traumatic Brain Injury,” says Elizabeth Snyder, a supervisor for the specialists. “But we don’t stop there. If a veteran is deemed not ready to be guided into a career path or trajectory just yet, we offer them several services to help them get there.”

Whether or not the veteran is deemed fit to be placed into a career or career path, the second phase involves assisting the veteran in alleviating any identified mental or physical health concerns, including alcohol and/or substance abuse, if needed.

In the third phase, once the veteran has been placed into a work site, the center will follow up on that person and continue their assessment while the veteran works toward full time employment.

In 2017 alone, the Tierney Center placed more than 280 veterans into meaningful employment at leading companies such as NASA and Social Security Administration. The Tierney Center, while currently working to spread its business model and best practices to other programs across Southern California, still has some empty space in its own halls and conference rooms to fill.

“Thanks to the Tierneys,” Knapp says of Thomas and Elizabeth Tierney, Coto-de-Caza residents of military background who approached Goodwill of Orange County with the center’s concept and donated $1 million to its creation.

Some of that space has been filled with different veterans’ resource programs which the center collaborates with. Knapp calls the center “Orange County’s veteran hub.”

Although Battle Buddy Bridges and Tierney are technically their own programs and do compete for the same grants and donations to subsist on, an example of their co-beneficial relationship is that a veteran can receive housing or transportation assistance from BBB and then, if that veteran needs assistance in finding a job, be referred to the Tierney Center.

The proximity of these different programs with one another inside the center births a sort of syzygy amongst themselves for beneficial collaboration, all in the interests of the veterans they serve.

“Most of us working in these veteran-servicing fields ourselves come from a military background, so there’s already that unspoken bond and readiness to work as a team. There’s camaraderie,” Rojas says of her experience in collaborating with Tierney. “The same goes for the veterans we guide and assist. They’re not just some client or number. They’re someone we know and understand.”

Knapp says that one of the biggest obstacles in his line of work is the overall unawareness of veterans that resources like the Tierney Center exist.

“Veterans, when reintegrating to civilian life, are taught to conform. So, rarely will a veteran tell you about their military background off the bat,” Knapp says. “It’s on every member of the community to reach out to these people who you think may be struggling. All you have to do is ask.” 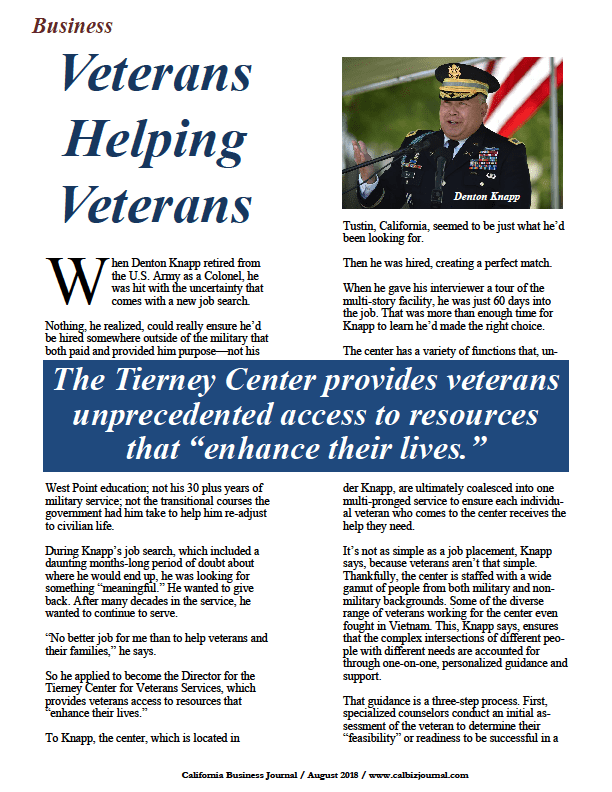 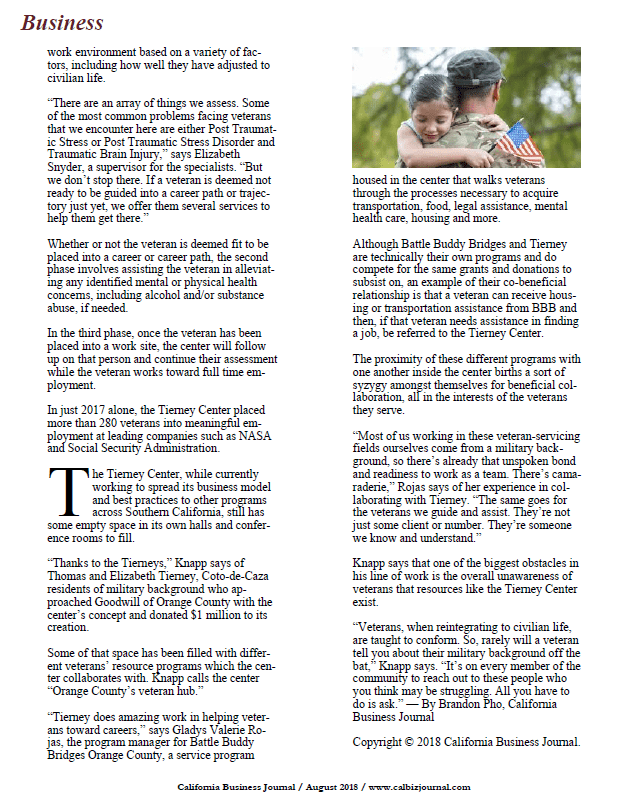