Algae-derived biofuels can ultimately replace the use of fossil fuels and resources like corn and sugarcane for high-priced petroleum. The one who is likely to make it happen, sooner than later, is Thomas Peters, who developed an ingenious, patented, underwater process in the largest biofuel project in U.S. history. 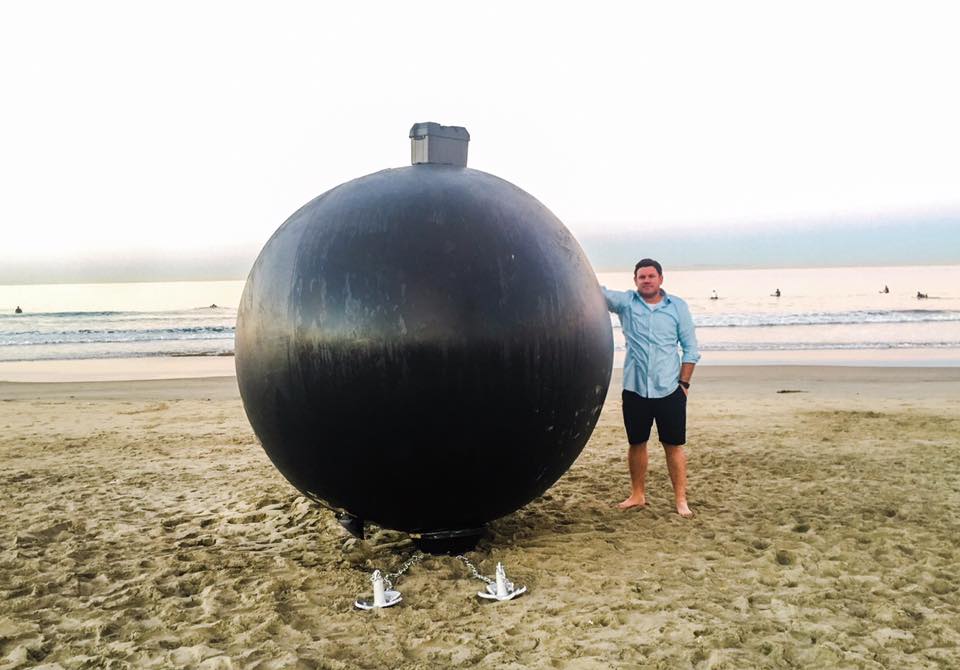 If you find yourself swimming or surfing one day in the Pacific Ocean in between Seal Beach and Huntington Beach, Calif., and you happen to discover a gigantic sphere 50 feet below your toes at the bottom of the ocean, don’t fret. There’s absolutely nothing to be nervous about. And frankly, there’s everything to be excited about.

The 16 gigantic, environmentally-friendly spheres buried below the Pacific Ocean come from Undersea Energy, a biofuel and biodiesel company launched by entrepreneur Thomas Peters in 2012 with the goal of ending the global controversy about using fossil fuels and limited resources like corn and sugarcane for even higher-priced petroleum.

What Undersea Energy does is grow algae below the vast ocean surface in what has become the largest biofuel project in U.S. history and is heralded as the first and only method to ever commercialize algae, which contains more oil than anything that is currently being used to make fuel — and is far cheaper than petroleum.

Biofuel is derived directly from living matter. It is produced through biological processes, such as agriculture and anaerobic (absence of free oxygen) digestion, rather than a fuel produced by geological processes such as fossil fuels, which is formed from decayed plants and animals that have been converted to crude oil, coal and natural gas.

“This project will revolutionize the way the world makes biofuels,” Peters says.

Peters’ journey to make history began in 2009, when he was studying for his MBA at the University of Southern California. At the time, he was working as an executive in the trucking industry. At the same time, fuel prices hit the unfathomable $5 mark per gallon for the first time.

“I began researching alternatives to fuel conservation, reducing weight and increasing the miles per gallon on the industry’s 40-ton trucks,” he says.

Very early on in his research, he had a feeling that he “was on to something,” he says. “I just had this weird feeling that someone had missed something — and I was driven to find it.”

During his research, he came across a NASA plan called the Omega Project, which referred to algae as a “viable source for fuel.” That piqued his interest.

The NASA project “didn’t go anywhere,” Peters says, and it was ultimately abandoned because, as he surmised, NASA officials utilized the top of the ocean to scrape and amass algae rather than the bottom of the ocean, where massive spheres could sit and provide a home for algae to live and grow rapidly (algae doubles every 24 hours).

This led to Peters’ launch of Undersea Energy as a non-profit organization. He has funded the company by himself, on a shoestring budget, while receiving help from a variety of companies that are interested to see if Peters can actually make this dream come true.

During his research, Peters zeroed in on using ocean, which comprises 72% of the earth, is free to use and doesn’t have any limitations like land, where corn is grown in an agonizingly slow process for the production of ethanol.

After getting approval from the Coast Guard, Peters built the gigantic spheres, which are made of polymer, a natural-synthetic material. Attached to the top of the sphere is a battery-operated hydrogen fuel cell to generate energy. He also inserted a light inside of the sphere because “algae needs light to grow – it can’t grow in the dark,” says Peters, who just recently developed an Ocean Thermal Energy Conversion (OTEC) system to make them even more self-sufficient.

Consisting of algae, fresh water and natural nutrients, the sphere is then lowered to the bottom of the Pacific. Canisters pump CO2 into the sphere, enabling the algae to grow expeditiously.

Soon thereafter, Thomas elevates the spheres and the algae is pumped out, salt is extracted from the water, and the natural product for fuel and oil is ready.

“It’s that simple,” Peters says with a laugh.

At full capacity, one sphere can produce as much as four thousand gallons of algae per day. Peters’ goal is to one day have thousands of spheres below the ocean, producing hundreds of thousands of gallons daily. 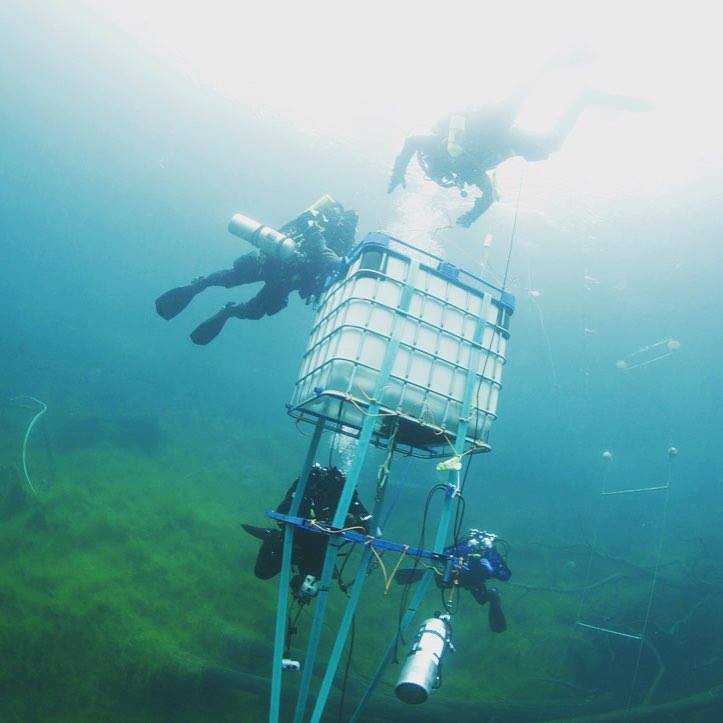 Another primary goal was working with the U.S. Navy, the largest consumer of biodiesel in the world, and Peters has already achieved that.

Initiatives such as Green Fleet and Farm to Fleet have already been passed by Congress to increase the Navy’s use of algae-derived biodiesel. With the Navy expected to dramatically expand under the Trump Administration, the use of biodiesel becomes even bigger.

Yet, not enough biodiesel is around. Enter Undersea Energy, which partnered with the Navy and the Department of Defense to develop, test and certify renewable fuels that meet the strictest standards.

“Specifically, we have developed jet fuel, marine diesel and on-road diesel that have been rigorously tested by the U.S. Navy and meet its military specifications,” Peters says.

“My ultimate goal is to get food out of the fuel industry,” Peters says. “We don’t need to use our farm land for fuel – plus the process is so ineffective. We need to use it for food, not fuel. There are people starving around the world.”

He knows this isn’t the most popular stance to take with people in big corn-producing states like Iowa and Nebraska, “but they’ll make more money off food versus fuel,” he says. “The method of using corn for fuel is archaic. It’s only a matter of time before the practice stops.”

While Peters was immersed in his research, he calculated that over the course of one year, one acre of corn produces 200 gallons of fuel. Algae, on the other hand, equates to 10,000 gallons, utilizing the same scale.

Yet only 1% of fuel used in the world today is algae-derived — and that’s because there just isn’t enough being produced. But Peters is on his way to reversing that trend in dramatic and historic fashion.

“I want to do something different,” he says. “There isn’t thee guy in clean tech yet. Social media is Mark Zuckerberg. Space travel is Elon Musk. In this industry, there isn’t that one guy yet.

Peters pauses for a moment and glares out at the Southern California sun breaking through the clouds. He turns back to his interviewer and says, “I want to help change the world, make a true impact, and make it a better place,” he says.

“I want to change the trucking industry, eliminate the use of fossil fuel, reduce our dependence on foreign oil and start utilizing an untapped natural resource that we can grow ourselves naturally in the ocean. That’s what my motivation is. This is drives me every day.” 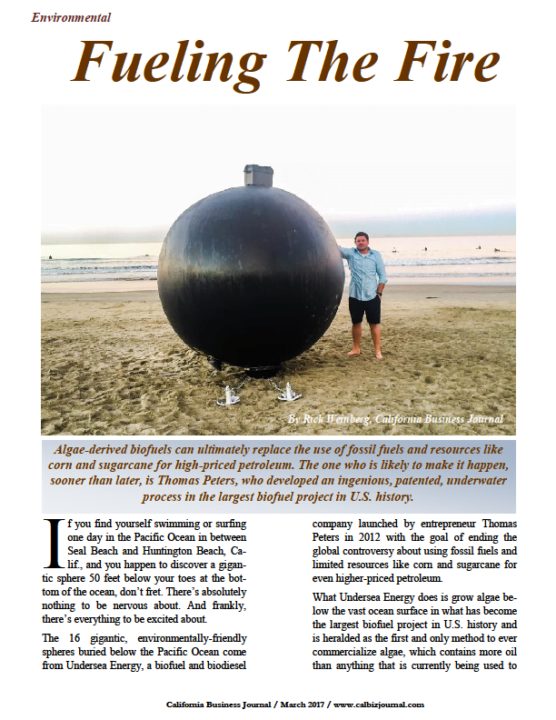