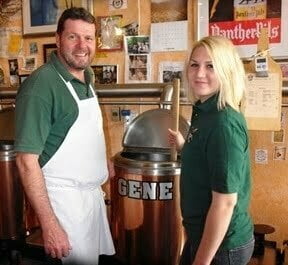 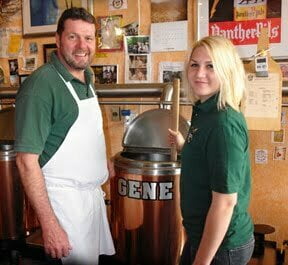 BrewBakers is the creation of Dennis Midden, a personable and fun-loving brew master who loves throwing a party every day at his one-of-a-kind facility.

The idea came to him 20 years ago when micro-breweries were growing as quickly as rap music. Midden knew the bakery industry inside and out because his father was a baker and Dennis often thought about how to tie beer and bread together, to marry them so to speak. After all, beer and bread are made with the same ingredients — wheat and barley.

Midden often found himself daydreaming about opening his own brewery, a place where customers could brew their own fresh-tasting beer and where Dennis could make his fabulous array of breads, a place where there’d be joyous birthday and anniversary parties, music and bands, a place where children could have birthday parties and make their own root beer and pretzels.

Then one day, while driving along the 57 freeway in Orange County, California, Midden decided that the time had come, that he would open his own brewery and bakery—and make it more unique than any place imaginable. At the time, he had his own food brokerage company, but the business was changing with supermarkets buyin 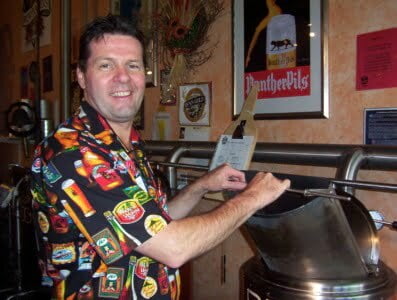 g each other up, and Midden felt it was the ideal time to make his move. He called his wife Linda, who fully supported the life-changing decision, and soon BrewBakers was no longer a dream but an actual building with signs, brewing kettles and all the ingredients necessary to make any beer imaginable.

“This is the best-kept secret in Southern California, not just in Huntington Beach and Orange County,” says BrewBakers regular Jim Highwart while sipping his own homemade beer at Midden’s monthly Saturday night BBQ, Blues and Beer extravaganza. “This place is totally out of the norm. It’s definitely as unique as they come.” 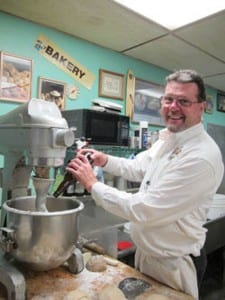 There’s no question about that. BrewBakers has an atmosphere that you simply won’t find anywhere. There are six 26-gallon brew kettles — named after Midden’s six brothers — that surround the front portion of the facility. The four bottling stations are named after Midden’s three sisters and his wife Linda. The back portion of the facility is where Midden bakes 15 mouthwatering varieties of bread, everything from sourdough and Italian to French, olive, Jewish Challah and rosemary. He also makes pizza with pretzel dough “that’s to die for,” according to customer Ed Laird.

What Midden has created is a genuine shrine for beer and bread consumption, a place that has a warm, family atmosphere unlike any other.

It’s Saturday night, and BrewBakers is rocking. The rock band, Sport ‘n’ Woodies, is whaling away as customers brew their own beer, laugh and joke, celebrate life, and, of course, drink the finest-tasting beer imaginable.

“This is the greatest place going,” says Jeff Donlevy, who drives every other month from Hermosa Beach to brew his own beer at BrewBakers.

On this night, he brought along 12 friends to celebrate the birthday of Bert Bergen.

“Jeff told me about this place and I went, ‘Wow, what an incredible way to celebrate Bert’s birthday,'” says Patricia Bergen, Bert’s wife. 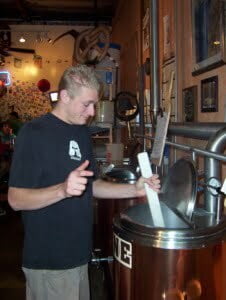 As she pours the finishing hops into the kettle to give the beer its finishing flavor that will separate it from all other beers and begins to stir the bubbling brew, she says, “Where else can you do this? Is this cool or what?”

It’s the ultimate unique thing to do–and Midden’s staff guides customers through the entire process, step by step. Customers first select the kind of beer they want to make from a list of about 100 beers. Customers then choose their beer based on their own tastes. If they like their beer smooth and silky and with a little ping, Midden provides the exact ingredients to that specific beer.

No matter what your tastes are, Midden has the exact ingredients to help you make it.

“It’s an incredible and awesome experience making your own beer,” says Chub Domotor of Lake Forest, who is sipping the Budapest Pilsner beer he made as a tribute to his parents, who are from Hungary. “It’s like taking a class—and you have a blast doing it.”

After customers brew their beer, it takes two weeks for it to ferment, at which time customers return to BrewBakers to bottle and custom label the beer. Then, of course, they drink it.

“It’s like having three parties — one to make the beer, one to bottle and label it and then one to drink it,” Domotor says. “And you wind up seeing the same people again, so you become like a family. It’s great.”

Some people, like Eric Meyer, have become so spoiled that they can’t even drink beer unless it’s their own home-made brew.

“I’m a total beer snob because of BrewBakers,” Meyer says as he sips his own brew that features his own label with his picture and birth date. “Last night I was over a friend’s house and they said, ‘Eric, how come you’re not drinking?’ And I said, “Because it’s not BrewBakers’ beer.”