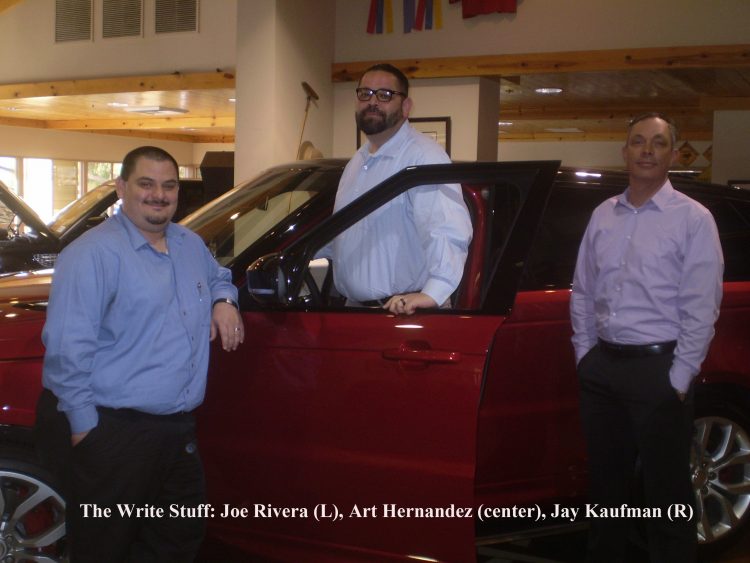 The service writing team at Jaguar Land Rover Anaheim Hills not only draws rave reviews from its customers and colleagues but also produces record marks in both on and offline satisfaction surveys. 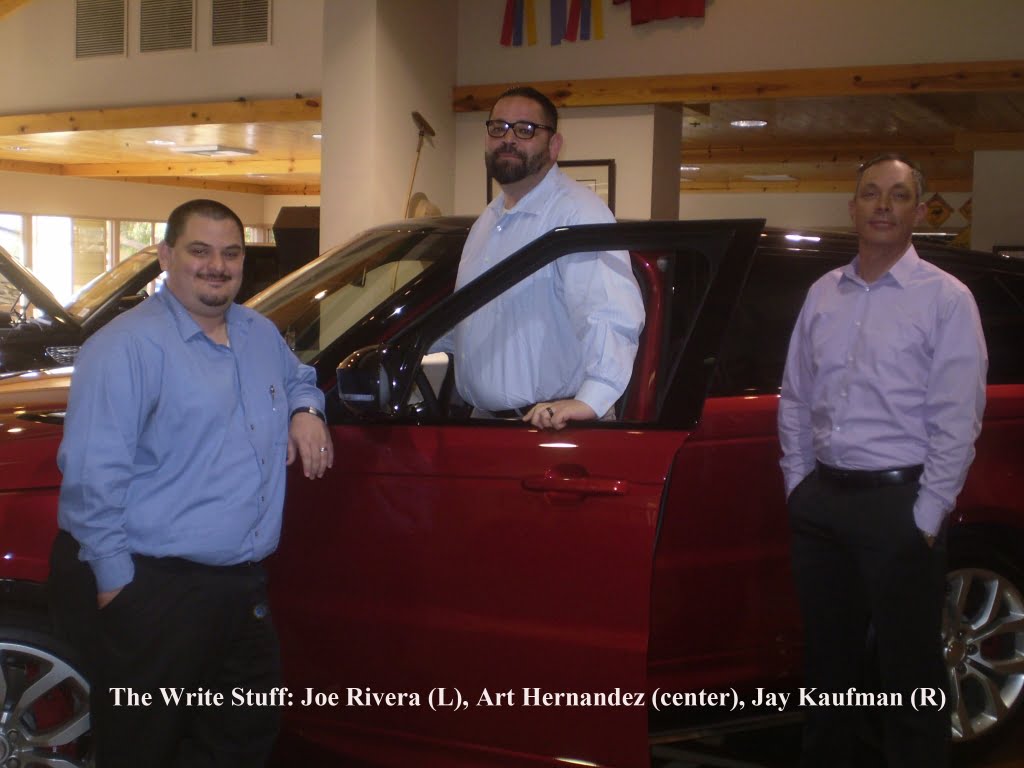 WHEN BOB VUSICH WAS APPOINTED SERVICE MANAGER  at Rusnak Auto Group’s new Jaguar Land Rover dealership in Anaheim Hills in 2012, his first task was to meet with the existing employees in his new department.

Sven Larson, the dealership’s General Manager, put the decision in Vusich’s hands: it was his call to keep an employee … or let them go.

Vusich’s hope was to keep every one of them. He preferred not to make any changes provided they met Rusnak standards. That’s the way he is. Why disrupt the operation — and people’s lives — if it’s not necessary. He cares too much about people to do anything unorthodox, to do anything thoughtlessly or recklessly.

But with the Rusnak Auto Group, business is conducted in the highest and most professional manner. The company proudly displays and talks about The Rusnak Standard – “and our intention was to take that from our Pasadena headquarters and other Southern California dealerships and bring it to our first store in Orange County,” Vusich says.

The existing staff members who remained from the previous ownership were incredibly nervous about meeting with Vusich. Was he one of those guys who would come in swinging an ax? Was he the type of person who wanted to bring in “his own people?”

The staff had already been tossed around like a volatile stock for more than a year. The previous ownership group had filed for bankruptcy and every morning when employees arrived to work, they didn’t know if the doors were going to opened — or locked. That went on for a year.

“It was scary,” says Art Hernandez, one of the service writers. “We didn’t know if we had a job from day to day — actually hour to hour.”

Well, if each member of the service department prayed for the perfect new boss, it’s doubtful someone better than Vusich would have landed in the director’s chair.

So on Day 1, there was Vusich, sitting down with each member of the team. He couldn’t have been happier with the results.

And he kept everyone.

“Whew,” says Joe Rivera, one of the service writers. “We all breathed a big sigh of relief, knowing we were keeping our jobs.”

“They’re a terrific team,” Vusich says. “They’re all about the customer and they take their work very seriously. In all the years I’ve worked with Rusnak – 37 years – I haven’t come across a team of service writers as dedicated as this one. They’re very high-quality people.”

Having grown up in Sunset Beach, Calif., Kaufman moved to Hawaii following college and worked on American Hawaiian Cruise Lines as a captain’s waiter.

After 9/11, the cruise line went bankrupt, so Kaufman returned to California.

One day, his took his father’s Lincoln to get serviced in Santa Monica and he befriended a service writer.

“He told me that it was a great gig and that you could make good money doing it,” Kaufman says.

When a position opened, Kaufman landed the job. He’s been a service writer ever since – 10 years and counting.

Kaufman didn’t stay long at the Lincoln dealership. That’s because there was a Saab store across the street that attracted his attention.

When that dealership went under, Kaufman came to Anaheim Hills and he’s emerged as one of the most complimented members of the team.

“It is rare in this day and age to come across someone who really cares about his customers as Jay does and goes out of his way to ensure things are done right,” says one of Kaufman’s clients, Dr. Ken Rich.

“What’s great about Jay is that he takes the time to explain what and why certain repairs were needed and has actually taken me to the vehicle to show me what had been replaced or repaired. He never ceases to amaze me with his knowledge of the vehicle and the ability to explain things in layman’s terms.

“I can’t tell you what a great feeling it is to know your vehicle is being taken care of and that I won’t be charged for unnecessary repairs. It gives me great peace of mind, which is something you can’t put a price on. Car repairs can be worrisome and nerve-wracking at times but working with someone as knowledgeable, articulate and pleasant as Jay helps to alleviate those concerns. He is the consummate professional.”

Laying Down The Law

Rivera has been a service writer for 12 years. His lifelong dream was to be a police officer and after high school in Redlands, Calif., he joined the police academy in Billings, Montana, where several family members and friends lived.

He spent nearly two years working the jails at a correction facility, to the dismay of his father.

“He kept telling me, ‘It’s too risky and you’re not making enough money,’” Joe says with a laugh.

“Finally, he got through to me.”

So Rivera joined his father at a Montana dealership and he’s never left the business.

“It’s a lot better dealing with Jaguar and Land Rover customers than inmates,” he says with a laugh. “When the economy crashed, I did second guess myself about leaving law enforcement. I remember thinking at the time, ‘Man, I would have had a good career if I had stayed in it.’ But you can’t go back there. You have to dust yourself off and get back at it.”

“I’m from Atlanta and even though I have been in California since 2005, I am still very much a Southern Belle who is accustomed to politeness, courteous gestures, and good old customer service,” Shyra Lowe says.

“Joe’s kindness, attentiveness, and strong desire to meet my needs perpetuate all the pleasantries that I am accustomed to receiving back in Georgia. When I walk into the dealership to have my vehicle serviced, I honestly feel like I am back home receiving all the wonderful hospitality that being connected to a family brings.”

“He always goes above and beyond the call of duty,” she says. “He truly is an amazing service representative and brings new meaning to ‘born to serve.’ I tell him all the time that I will never go anywhere else for my vehicle. He has a wonderful personality and vast knowledge of my vehicle and its functionality. That provides me with the confidence and reassurance that I need.”

Hernandez has been working with Jaguars and Land Rovers ever since landing his first full-time job out of high school in 1998. He spent his first 16 years in the industry working at Newport Beach Land Rover, the last 14 as a service writer.

When the head of service at Newport Beach left for the Anaheim Hills dealership, he wanted Hernandez to come with him. Eventually, Hernandez joined him. But he was in for a shock shortly after taking the new job. He discovered from a colleague on his first day the dealership was in bankruptcy.

With a wife and three children, Hernandez was nervous beyond comprehension. But then Rusnak came to the rescue, taking over the dealership and propping it up among the leading Jaguar and Land Rover stores in California.

“It’s a night and day change from the prior ownership group versus Rusnak,” he says. “Rusnak is an unbelievable company. Its standards are so high it makes you proud to work for them.”

Like Kaufman and Rivera, Hernandez is masterful at handling customers too.

“What I like about Art is his personality, his experience and his knowledge with the brand,” Vusich says. “He’s very considerate toward customers. He recognizes that when a customer brings their car in to be serviced, it’s a necessary inconvenience. They have to make all kinds of arrangements. They have to get a rental car. It’s a total disruption of the daily routine. He’s very sensitive to those dynamics.

“All three of them are. That’s why they’re so good and effective at what they do.” — RW