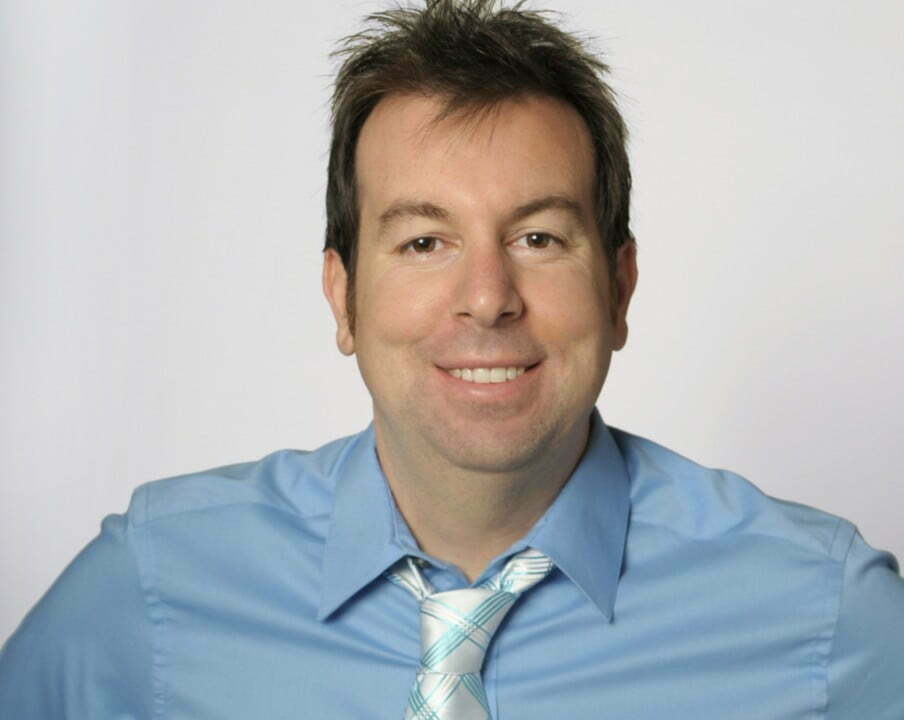 Jonathan Abramson has mastered the art of crowdfunding with well-crafted strategies for non-profits, socially-conscious organizations and healthcare companies.

The mastermind behind some of the most successful Indiegogo crowdfunding campaigns for non-profits and socially-conscious organizations is Jonathan Abramson.

Abramson engineered iHEAR Medical’s crowdfunding campaign from a goal of $75,000 to $450,000 with more than 1,000 contributors in less than a two-month span.

Abramson has been so successful in the crowdfunding arena that Indiegogo approached him about becoming a strategic partner.

“What can I say except that Jonathan is amazing,” says Adnan Shennib, President and Founder iHEAR Medical, Inc. “Because of his well–designed strategy, we not only quadrupled our crowdfunding goal, but it helped set us on a path for remarkable success in sales and interest from investors and venture capital firms.” 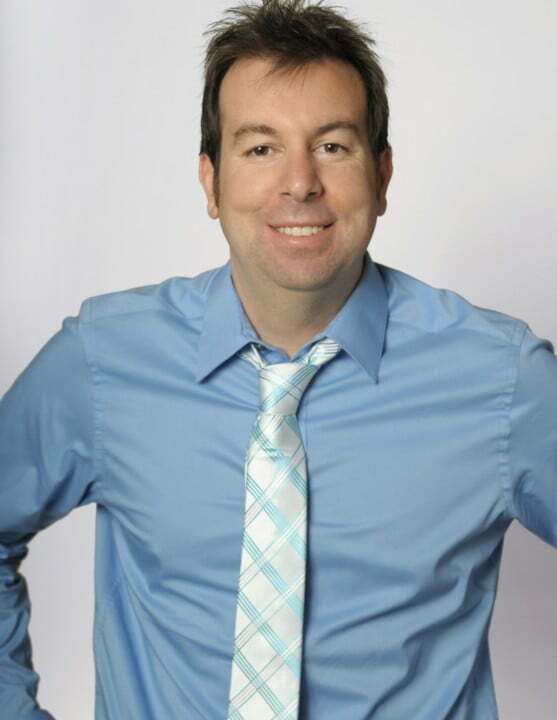 Jonathan Abramson is behind some of the most successful Indiegogo crowdfunding campaigns for non-profits and socially-conscious organizations.

Abramson’s non-crowdfunding projects focus is foundations, something that is very close to his heart, and socially-conscious organizations and companies, such as Free Wheelchair Mission, Rebecca’s House, Wyland Foundation and pHur, which developed one of the most unique organic disinfectants on the market. Abramson also sits on the Marcom Board at the American Diabetes Association of America.

Bluetone feature article One of Bluetone’s most popular success stories is Beforeplay.org, a play on words for what was truly a serious problem in Colorado. With the state’s unintended pregnancy rates of 18-29 years olds the highest in the country, Bluetone partnered with the Colorado Department of Health and Environment and advertising agency Vermillion and developed a dynamic and progressive campaign that resonated deeply with the target audience and gained national attention to drive awareness to the problem. The campaign was even lauded by Colorado Governor John Hickenlooper. Today, Colorado’s unintended pregnancy rates of 18-29 year olds is among the lowest in the U.S., a complete about-face — thanks in part to the work of Abramson.

“That was one of my favorite campaigns,” he says. “It just meant so much to reverse the trend that was firmly established in Colorado. We made such a difference there and that’s what it’s all about – making a difference.”

The Beforeplay.org campaign website has been viewed by more than two million visitors – and other states suffering from an unintended pregnancy rate problem may follow in Colorado’s shoes and develop a similar campaign.

Abramson’s success with iHEAR Medical caught the attention of Wing, a wireless Bluetooth-enabled ear phone company whose executives reached out to Abramson from its corporate offices 2,200 miles away in Holland. In less than a month, Abramson doubled Wing’s crowdfunding goals with nearly 1,200 contributors.

“The key to an effective crowdfunding campaign is the ‘perk’ and the pricing strategy – what will contributors get and what is the early-bird pricing,” Abramson says. “Eighty percent of contributors’ donate $25 – that’s why we always start the perk strategy around that pricing.”

Perk strategy is so critical because the campaign has to come out of gate swinging and make serious progress right from the get-go. They call that the “Go-Go Factor.” If a campaign gets off to a slow start and potential contributors see that, they’re more likely to back down and not contribute.

So what Abramson does before kicking off a campaign is to make sure his clients have a checklist of items that need to be accomplished in order for the campaign to be successful. He also uses analytics to measure the campaign to ensure targets can be met in terms of impressions, shares, PR and ultimately funding conversions.

“We start planning 30 days before the campaign launches,” he says. “It’s imperative that clients have a firm and accountable database of associates, family and friends before the campaign begins. If 30% of the clients’ network are contributing, the campaign has a better chance of being successful. Most people will not contribute if they see a ‘losing’ product or service. The more contributors you have at the beginning, the better the campaign will be. That’s been the key to our productive campaigns.”

Editor’s Notebook: Little Red Feather isn’t so little. Its investors include New England Patriots quarterback Tom Brady and Hollywood’s Taylor Hackford, who directed Ray, The Devil’s Advocate and Proof of Life … Green Sense Farms is an indoor vertical farm in Indiana that controls conditions to maximize plant growth and sustainability. It is free of pesticides, GMOs and herbicides. Vertical farming requires less energy and less water, and farmers are able to better control the environment to ensure produce is packed full of nutrients … There is a new twist to crowdfunding – it’s called Start Engine and it’s equity based, not perk based. Abramson’s equity-based campaign with Green Sense Farms generated $700,000 … The Free Wheelchair Mission organization has distributed almost one million wheelchairs to the underprivileged in developing countries. Abramson worked as its Marketing Director before starting Bluetone in 2009 … Abramson’s next Indiegogo campaign Irvine, Calif.-based pHur. Stay tuned for the results … Abramson is also working with Paul Ekman, the world-renowned psychologist who is writing a book with the Dali Lama about human emotions. Ekman is a pioneer in the study of emotions and their relation to facial expressions. 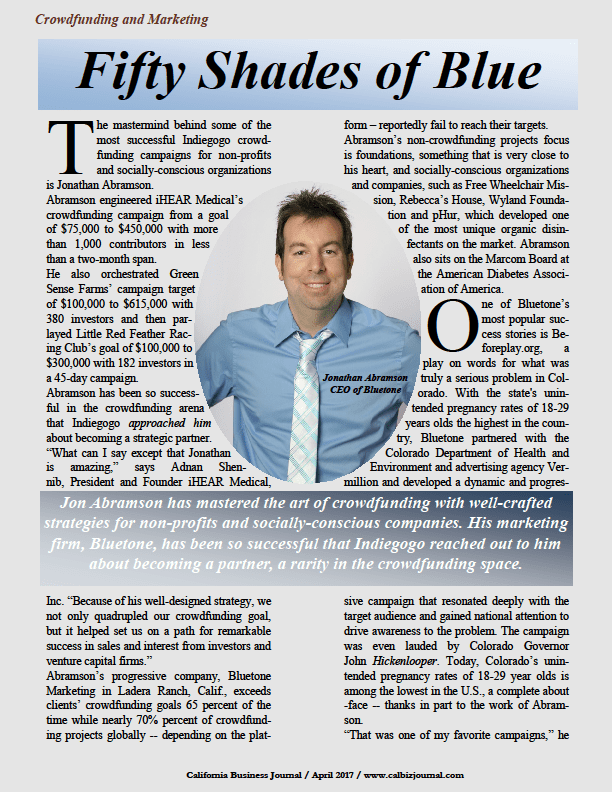 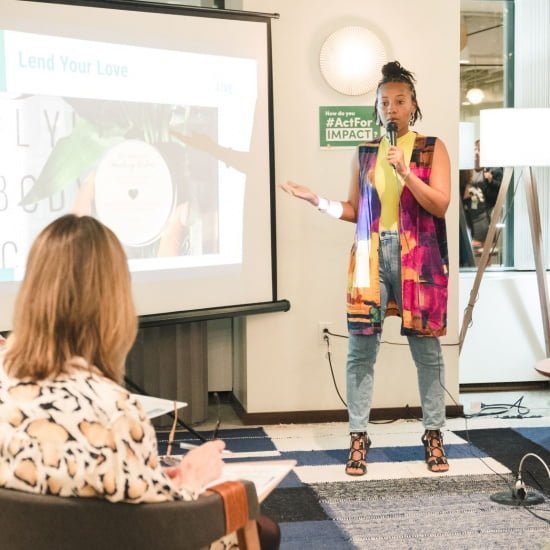